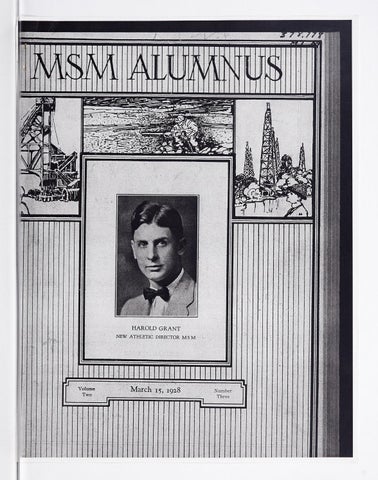 Schoot of Mines and Metallurgy University

Graduate courses leading to the degree of Master of Science are also offered in these curriCula . FOR INFORMATION, ADDRESS THE REGISTRAR

out of a hundred that you will marry a &quot;Hard Rock The alumni records show that of the fifteen queens Pafriek who have reigned&#39; since the queen &#39; became a the celelJrati&lt;?n, ~ ~fght . hav,e t;:Iarried Scho?Lof Mine·s

September 5, w hil e the sophomores and upper r egiste r o n September 10 a nd 11. The period be tember 5 a nd 10 will be devoted to ge tting th e sta rt ed off in th e ri g ht manner. . Th e actua l registration of th e freshmen will take th e 5th. The 6t h, 7th and 8th will be devoted placeme nt exam inatio ns and to talks by Prof. H. H. S tu de nt Adv iso r, o n gene r a l orientation to college on pr oper methods of st udy. There will a lso be st udent ac tivity. Sometime during Fresh m an W coming freshmen will be entertain ed by · th e fa Snl&quot;oker in th e J ackling Gym nas ium . . Also durin g th e ch ur ches of Rolla will be aske d to have ent erta inment for freshmen belonging to their the&#39; loca l th ea tre will be a·.:;ked t o provide suitable m ent. The most vital part of th e· plan, according to Prof. will co nsis t of dividing. tb e incoming, freshm en into eIg ht sec tI ons, eac h be1l1g und er the supervision of m em ber. Each sectio n will be assigned &#39; to a for m ee tings and the facult y m ember in expected to a dmini st er th e placement examinat between examinat io ns see that th e men in hi s &#39; plete their physical exami nat io ns. He will also around the sc hool a nd get them acq uainted with depar tments, see that th ey find places to live, and in act as a counsellor for hi s g roup t o help th em get the sta rt in th eir new surroundings. The a bove plans are tentati ve a nd will be subject to during the tim e between now and the opening of sch new incoming freshmen will be g ive n a complete som etime during A ugust outlining the programme fo r man Week. . 00

Freshman Week Next Year Foll owi ng out some of th e Si.lggest ions grow in g ou t of the studies of t he Facu lty Comm ittee cooperatin g with the Society for the· Promotion of E ng in ee ring Ed ucatio n, the School of Mines wi ll have &quot;Freshman Week&quot; at the beginning of school nex t year. T he. freshmen will r egiste r o n

Final Exams Now A t the end of the semeste r jU3t closed all s fres hm a n and sop homor e subjects had the pleas ure ing th eir in st ru cto rs for the last time to face a fin al nation. The final exa m program was adopted by the last yea r for a ll freshmen and sop hom or e subje&#39;cts th is year. The exa m s are optional for thos e in the classes a nd some of the faculty members ent erta ined junio rs a nd sen io rs in a similar manner. The matter of final exams for t he fr es hma n and sub jects came about as a result of studi es m Soc iety fo r the Promotion of Engi neering Ed wh ich society the Sc hool of Mines has bee n COODe ra tjH~ th e last seve r a l yea rs. - -- - - -- - - - 00 - -- - - - - - - -

Beta Pro of the Mi Athletic A who is wil c[ete, Wa! Corporatio

ball in &#39;23 and &#39;24 playing in the backfield, and lettered in track - in &#39;23. He was a lso a member of the Rollamo Board. He is at present employed by the National ·Carbon Company at Belleville, at which place he met his bride who , was employed as a teacber in the city schools -there.

1916 Robert Cmig is with Ingersoll-Ranp Company at Cleveland, Ohio. His address is 1620 Williamson Building, of that

who- is with, the~ Standard Oil people, is at at -Huntington Beach, Caiif. He expects return to Venezuela, S, A. &#39;has returned &#39; to Chuquicamata, Chile, with, Comp,a ny, after an absence of two now married. &#39; Walker E. Case and lit,tle daughter - drove part of February; W ,alker, who is with Telephone Company in St, ,Louis, was on his as on &#39;business for his company., His wife and remained in Rolla during hi,s. absence .. .

&quot;, 1909 Mr. Vic B. Hughes passed through RoH 4 on &#39;February &#39;7, r&#39;eturning from a &#39;trip to Tennessee, Mr. Hughes , stopped off to visit the geology department of the School of &quot;Mines and wa&#39;&quot; very mu.c h interesUd ·in the changes that have taken place since he was a student here. Mr. Hughes is particu- &#39; larly interested in , work in geophysical prospecting, &#39; The school is doing some work along this line now and expects to enlarge its facilities for such studies in the very near future.

(878 William Y. Bean visited the School &#39;of Mines on February 3, 1928&#39;. Mr. Bean graduated in civil engineering [p. 1878, the fourth graduating class o&#39;f the school. The w9rk of his profession has taken him to various parts of the, United States. He is now Inspecto&#39;i&#39; and, Instructor, Grand Commandery, Knights Templar of Missouri, at Springfield, Missouri. His h9meaddres,s is R,oute 4, Carthage Road, Spring, field .. &quot;

Copyright is held by the University of Missouri. The Missouri S&T Magazine is available for free personal, non-commercial and educational use, provided that proper citation is used. Any commercial use without written permission is strictly prohibited.