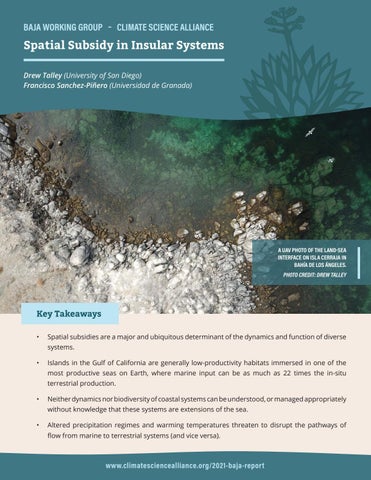 Spatial subsidies are a major and ubiquitous determinant of the dynamics and function of diverse systems.

Islands in the Gulf of California are generally low-productivity habitats immersed in one of the most productive seas on Earth, where marine input can be as much as 22 times the in-situ terrestrial production.

Neither dynamics nor biodiversity of coastal systems can be understood, or managed appropriately without knowledge that these systems are extensions of the sea.

Altered precipitation regimes and warming temperatures threaten to disrupt the pathways of flow from marine to terrestrial systems (and vice versa).

What is the focus of your research? We focus on flows of resources, organisms, and materials among habitats as a key influence on community structure and food web dynamics. Extensive work demonstrates that cross-habitat flux is a major and ubiquitous determinant of the function of diverse systems [e.g., (1, 2)]. The seminal work in this field was research by the late Gary Polis beginning in the 1980’s in Bahía de los Ángeles, and continued by collaborators, including these authors, after his tragic death in 2000. While we have continued this work on these islands to maintain an over 30 year-long dataset, we have also extended that reach to include spatial subsidies across other systems, including wetlands. Via a complex food web that connects the ocean and land, terrestrial consumers directly and indirectly use shore carrion, algal detritus, intertidal prey, and seabird products. Marine input (MI) promotes dense populations of several insect taxa, spiders, scorpions, lizards, rodents, and carnivores (3-24x more abundant on the coast and small islands vs. inland areas and large islands).

How do you see climate change impacting the focus of your research? The impacts of MI on terrestrial ecosystems are controlled, in part, by both environmental (e.g., precipitation, temperature) and biotic (e.g., species-specific) factors. Climate change can alter these mechanisms, both directly (e.g., altering precipitation patterns) and indirectly (e.g., affecting which species are available to use or become subsidy).

What climate impacts are you seeing and what future impacts do you anticipate? In the past two decades, there has been a large change in the perennial plant community, including a dramatic decline in a dominant plant, the cholla. This change is not restricted to Bahía de los Ángeles surveys within a portion of the Pinacate Biosphere Reserve suggest a similar trend there, likely due to extended drought and rising temperatures. Further, one of the biggest drivers of spatial subsidy on large islands is the activity of seabirds, and population growth of some seabird species can decline by as much as 15% in a single year from increased sea surface temperature. This could be exacerbated by the higher frequency of El Niño events expected in the future. Further, changes in the frequency of precipitation pulses may also change the long-term dynamics of the system by alteration of the relative contribution of in-situ vs. allochthonous resources.

ABUNDANT MACROALGAE IN THE WATERS NEXT TO A LOW-PRODUCTIVITY ISLAND. PHOTO CREDIT: DREW TALLEY

What are you most concerned about? The exchange of materials and organisms across discrete habitat boundaries is a universal phenomenon that occurs across diverse land, freshwater, and marine systems. MI affects coastal communities in many varied habitats, from the tropics, to temperate coasts, to boreal and sub- polar habitats [see (1, 3) and references therein]. Most obviously and directly, seabird guano, macrophytes and marine animal carcasses subsidize these land communities and allow higher numbers of consumers throughout the web. Subsidized consumers then interact with their prey and predators to indirectly affect virtually all species in coastal systems. While the changes to these subsidies are more easily recognized where there is a high productivity habitat adjacent to a low productivity one (as in Bahía de los Ángeles), undoubtedly these same impacts occur across all coastal ecosystems. In addition, these dynamics can be extended to other insular systems, such as protected areas influenced by the surrounding landscape (e.g., predatory birds subsidized via scavenging on agricultural or urban areas increase predation pressure on protected areas).

What are the gaps in understanding that need more research? We still have little understanding of how geomorphology alters the movement of spatial subsidy; how far inland (and for how long) subsidy effects persist; how retention and identity of shore drift alters MI effects; and how important these effects are at boundaries where there is less pronounced contrast between terrestrial and marine primary production.

THIS LONG-TERM DATASET WOULD NOT HAVE BEEN POSSIBLE WITHOUT EXTENSIVE COLLABORATION. COMISIÓN NACIONAL DE ÁREAS NATURALES PROTEGIDAS, THE LOCAL COMMUNITY, AND THE NON-PROFIT SCIENCE EDUCATION ORGANIZATION, OCEAN DISCOVERY INSTITUTE (PICTURED HERE) WERE CRITICAL TO CONTINUING THIS DATASET AFTER GARY POLIS’ DEATH IN 2000. PHOTO CREDIT: DREW TALLEY

What is your plan moving forward to start to better understand or minimize the impacts from climate change? We will continue to add to our &gt;30 year dataset on plants and terrestrial arthropods in Bahía de los Ángeles, incorporating additional variables related to geomorphology. In collaboration with Comisión Nacional de Áreas Naturales Protegidas, we have begun to use unmanned aerial vehicles (UAVs) to census plant and shore drift dynamics, and we are using similar techniques to those used in Bahía de los Ángeles to look for similar spatial subsidy effects across other boundaries and habitats. Our current focus is on understanding the complex interactions between island size, bird status, precipitation, and geomorphology to better understand and predict future changes. 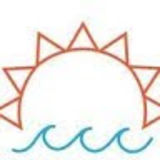