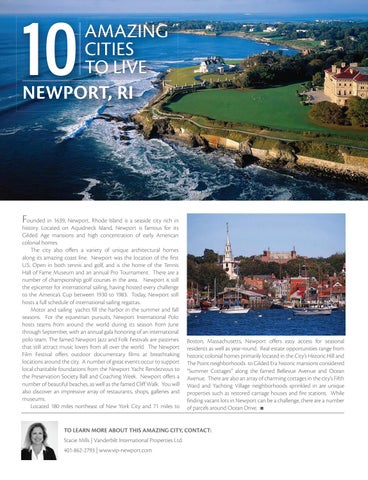 ounded in 1639, Newport, Rhode Island is a seaside city rich in history. Located on Aquidneck Island, Newport is famous for its Gilded Age mansions and high concentration of early American colonial homes. The city also offers a variety of unique architectural homes along its amazing coast line. Newport was the location of the first U.S. Open in both tennis and golf, and is the home of the Tennis Hall of Fame Museum and an annual Pro Tournament. There are a number of championship golf courses in the area. Newport is still the epicenter for international sailing, having hosted every challenge to the America’s Cup between 1930 to 1983. Today, Newport still hosts a full schedule of international sailing regattas. Motor and sailing yachts fill the harbor in the summer and fall seasons. For the equestrian pursuits, Newport International Polo hosts teams from around the world during its season from June through September, with an annual gala honoring of an international polo team. The famed Newport Jazz and Folk Festivals are pastimes that still attract music lovers from all over the world. The Newport Film Festival offers outdoor documentary films at breathtaking locations around the city. A number of great events occur to support local charitable foundations from the Newport Yacht Rendezvous to the Preservation Society Ball and Coaching Week. Newport offers a number of beautiful beaches, as well as the famed Cliff Walk. You will also discover an impressive array of restaurants, shops, galleries and museums. Located 180 miles northeast of New York City and 71 miles to

Boston, Massachusetts, Newport offers easy access for seasonal residents as well as year-round. Real estate opportunities range from historic colonial homes primarily located in the City’s Historic Hill and The Point neighborhoods to Gilded Era historic mansions considered “Summer Cottages” along the famed Bellevue Avenue and Ocean Avenue. There are also an array of charming cottages in the city’s Fifth Ward and Yachting Village neighborhoods sprinkled in are unique properties such as restored carriage houses and fire stations. While finding vacant lots in Newport can be a challenge, there are a number of parcels around Ocean Drive. ■ 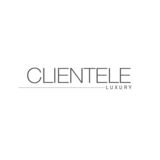