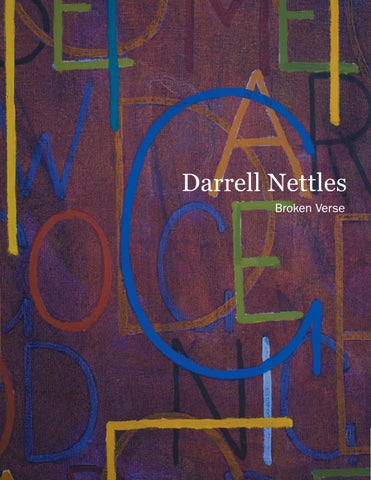 Broken Verse The Charlie Hebdo attack on January 7, 2015, marked the start of my new work. I felt a strong need to turn this attack on free speech into art. I extracted the text from a staff editorial in the

When I started incorporating Genesis in my

paintings, it was like discovering a gold mine. Then

for studies, drawings, and paintings. The hard

Shakespeare came along, and I was swept away.

news became an abstract artifact of an era. Transforming the text gave the words new power and, by extension, gave my paintings layered meaning. This was my first experience using text both as the background and subject of a painting. Next, I turned to Greek mythologies for further inspiration but found them unsatisfying. The stories were English translations of retold myths and not original. The writing lacked the sense of immediacy I was seeking.

After the Charlie Hebdo attack, my mood was very dark. Shakespeare provided a home for that darkness as well as a window for great beauty. As poetry became more important in my life, I saw more possibilities for paintings. When text is transposed to canvas, it becomes beautiful in an entirely new way. Instead of reading it one word at a time in black type, you take it all in at once, with color, shape, and form. It enters your brain and your heart by another avenue. On canvas,

It was then a natural step to the Book of Genesis.

it becomes a monument to treasure, instead of

Even though it is also an English translation,

the language of the King James version is very powerful. I was taught as a child that this is the word of God. I heard these scriptures, repeatedly, in church and Bible School throughout my early childhood, and the words still ring in my ears today.