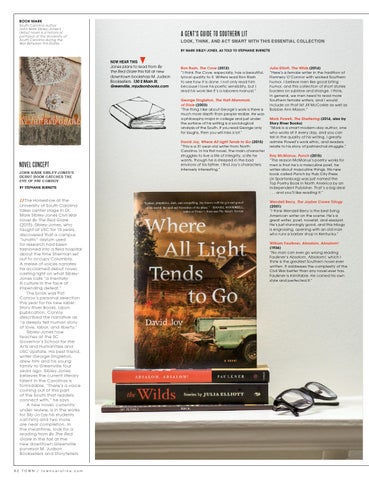 BOOK MARK South Carolina author John Mark Sibley-Jones's debut novel is a historical portrayal of the University of South Carolina during the War Between the States.

A GENT'S GUIDE TO SOUTHERN LIT LOOK, THINK, AND ACT SMART WITH THIS ESSENTIAL COLLECTION BY MARK SIBLEY-JONES, AS TOLD TO STEPHANIE BURNETTE

Ron Rash, The Cove (2012) “I think The Cove, especially, has a beautiful, lyrical quality to it. Writers read Ron Rash to see how it is done. I not only read him because I love his poetic sensibility, but I read his work like it’s a laborers manual.” George Singleton, The Half-Mammals of Dixie (2003) “The thing I like about George’s work is there is much more depth than people realize. He was a philosophy major in college and just under the surface of his writing is a sociological analysis of the South. If you read George only for laughs, then you will miss a lot.”

// The Horseshoe at the

University of South Carolina takes center stage in Dr. Mark Sibley-Jones Civil War novel By The Red Glare (2015). Sibley-Jones, who taught at USC for 15 years, discovered that a campus “lunatic” asylum used for research had been fashioned into a field hospital about the time Sherman set out to occupy Columbia. A melee of voices narrates his acclaimed debut novel, casting light on what SibleyJones calls “a mentally ill culture in the face of impending defeat.” The book was Pat Conroy’s personal selection this year for his new label: Story River Books. Upon publication, Conroy described the narrative as “a deeply felt human story of love, labor, and liberty.” Sibley-Jones now teaches at the SC Governor’s School for the Arts and Humanities and USC Upstate. His best friend, writer George Singleton, drew him and his young family to Greenville four years ago. Sibley-Jones believes the current literary talent in the Carolinas is formidable. “There’s a voice coming out of this part of the South that readers connect with,” he says. A new novel, currently under review, is in the works for Sib-Jo (as his students call him) and two more are near completion. In the meantime, look for a reading from By The Red Glare in the fall at the new downtown Greenville purveyor M. Judson Booksellers and Storytellers.

David Joy, Where All Light Tends to Go (2015) “This is a 31-year-old writer from North Carolina. In his first novel, the main character struggles to live a life of integrity, a life he wants, though he is steeped in the bad environs of his father. I find Joy’s characters intensely interesting.”

Julia Elliott, The Wilds (2014) “Here’s a female writer in the tradition of Flannery O’Connor with wicked Southern humor. I believe men like good biting humor, and this collection of short stories borders on sublime and strange. I think, in general, we men need to read more Southern female writers, and I would include on that list Jill McCorkle as well as Bobbie Ann Mason.” Mark Powell, The Sheltering (2014, also by Story River Books) “Mark is a smart modern-day author, one who works at it every day, and you can tell in the quality of his writing. I greatly admire Powell’s work ethic, and readers relate to his story of patriarchal struggle.” Ray McManus, Punch (2015) “The reason McManus’s poetry works for men is that he’s a masculine poet, he writes about masculine things. His new book called Punch by Hub City Press (in Spartanburg) was just named the Top Poetry Book in North America by an Independent Publisher. That’s a big deal . . . and you’ll like reading it.” Wendell Berry, The Jayber Crowe Trilogy (2001) “I think Wendell Berry is the best living American writer on the scene. He’s a great writer, poet, novelist, and essayist. He’s just stunningly good, and this trilogy is engrossing, opening with an old man who runs a barber shop in Kentucky.” William Faulkner, Absalom, Absalom! (1936) “No man can ever go wrong reading Faulkner’s Absalom, Absalom!, which I think is the greatest Southern novel ever written. It addresses the complexity of the Civil War better than any novel ever has. Faulkner is inimitable. He coined his own style and perfected it.”