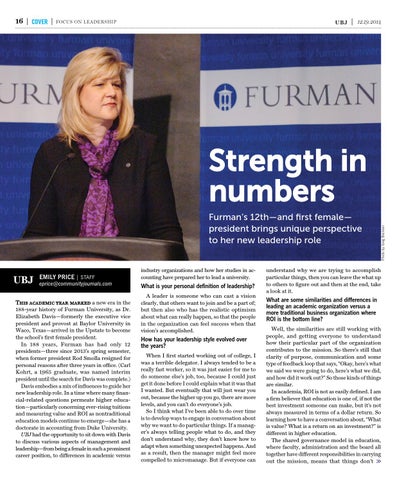 This academic year marked a new era in the 188-year history of Furman University, as Dr. Elizabeth Davis—formerly the executive vice president and provost at Baylor University in Waco, Texas—arrived in the Upstate to become the school’s first female president. In 188 years, Furman has had only 12 presidents—three since 2013’s spring semester, when former president Rod Smolla resigned for personal reasons after three years in office. (Carl Kohrt, a 1965 graduate, was named interim president until the search for Davis was complete.) Davis embodies a mix of influences to guide her new leadership role. In a time where many financial-related questions permeate higher education—particularly concerning ever-rising tuitions and measuring value and ROI as nontraditional education models continue to emerge—she has a doctorate in accounting from Duke University. UBJ had the opportunity to sit down with Davis to discuss various aspects of management and leadership—from being a female in such a prominent career position, to differences in academic versus

industry organizations and how her studies in accounting have prepared her to lead a university.

What is your personal definition of leadership? A leader is someone who can cast a vision clearly, that others want to join and be a part of; but then also who has the realistic optimism about what can really happen, so that the people in the organization can feel success when that vision’s accomplished.

How has your leadership style evolved over the years? When I first started working out of college, I was a terrible delegator. I always tended to be a really fast worker, so it was just easier for me to do someone else’s job, too, because I could just get it done before I could explain what it was that I wanted. But eventually that will just wear you out, because the higher up you go, there are more levels, and you can’t do everyone’s job. So I think what I’ve been able to do over time is to develop ways to engage in conversation about why we want to do particular things. If a manager’s always telling people what to do, and they don’t understand why, they don’t know how to adapt when something unexpected happens. And as a result, then the manager might feel more compelled to micromanage. But if everyone can

Strength in numbers understand why we are trying to accomplish particular things, then you can leave the what up to others to figure out and then at the end, take a look at it.

What are some similarities and differences in leading an academic organization versus a more traditional business organization where ROI is the bottom line? Well, the similarities are still working with people, and getting everyone to understand how their particular part of the organization contributes to the mission. So there’s still that clarity of purpose, communication and some type of feedback loop that says, “Okay, here’s what we said we were going to do, here’s what we did, and how did it work out?” So those kinds of things are similar. In academia, ROI is not as easily defined. I am a firm believer that education is one of, if not the best investment someone can make, but it’s not always measured in terms of a dollar return. So learning how to have a conversation about, “What is value? What is a return on an investment?” is different in higher education. The shared governance model in education, where faculty, administration and the board all together have different responsibilities in carrying out the mission, means that things don’t &gt;&gt; 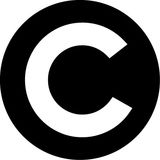