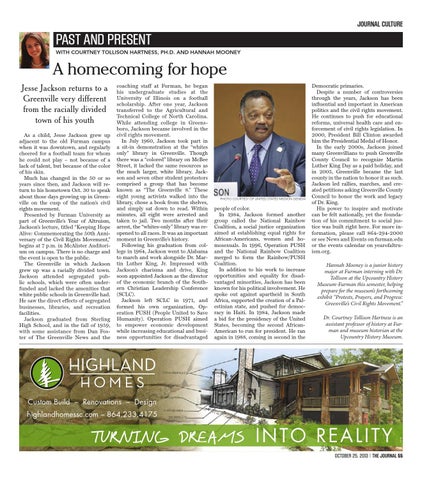 Past and present with courtney tollison Hartness, ph.d. and hannah mooney

A homecoming for hope Jesse Jackson returns to a Greenville very different from the racially divided town of his youth As a child, Jesse Jackson grew up adjacent to the old Furman campus when it was downtown, and regularly cheered for a football team for whom he could not play – not because of a lack of talent, but because of the color of his skin. Much has changed in the 50 or so years since then, and Jackson will return to his hometown Oct. 30 to speak about those days growing up in Greenville on the cusp of the nation’s civil rights movement. Presented by Furman University as part of Greenville’s Year of Altruism, Jackson’s lecture, titled “Keeping Hope Alive: Commemorating the 50th Anniversary of the Civil Rights Movement,” begins at 7 p.m. in McAlister Auditorium on campus. There is no charge and the event is open to the public. The Greenville in which Jackson grew up was a racially divided town. Jackson attended segregated public schools, which were often underfunded and lacked the amenities that white public schools in Greenville had. He saw the direct effects of segregated businesses, libraries, and recreation facilities. Jackson graduated from Sterling High School, and in the fall of 1959, with some assistance from Dan Foster of The Greenville News and the

coaching staff at Furman, he began his undergraduate studies at the University of Illinois on a football scholarship. After one year, Jackson transferred to the Agricultural and Technical College of North Carolina. While attending college in Greensboro, Jackson became involved in the civil rights movement. In July 1960, Jackson took part in a sit-in demonstration at the “whites only” library in Greenville. Though there was a “colored” library on McBee Street, it lacked the same resources as the much larger, white library. Jackson and seven other student protestors comprised a group that has become known as “The Greenville 8.” These eight young activists walked into the library, chose a book from the shelves, and simply sat down to read. Within minutes, all eight were arrested and taken to jail. Two months after their arrest, the “whites-only” library was reopened to all races. It was an important moment in Greenville’s history. Following his graduation from college in 1964, Jackson went to Alabama to march and work alongside Dr. Martin Luther King, Jr. Impressed with Jackson’s charisma and drive, King soon appointed Jackson as the director of the economic branch of the Southern Christian Leadership Conference (SCLC). Jackson left SCLC in 1971, and formed his own organization, Operation PUSH (People United to Save Humanity). Operation PUSH aimed to empower economic development while increasing educational and business opportunities for disadvantaged

people of color. In 1984, Jackson formed another group called the National Rainbow Coalition, a social justice organization aimed at establishing equal rights for African-Americans, women and homosexuals. In 1996, Operation PUSH and the National Rainbow Coalition merged to form the Rainbow/PUSH Coalition. In addition to his work to increase opportunities and equality for disadvantaged minorities, Jackson has been known for his political involvement. He spoke out against apartheid in South Africa, supported the creation of a Palestinian state, and pushed for democracy in Haiti. In 1984, Jackson made a bid for the presidency of the United States, becoming the second AfricanAmerican to run for president. He ran again in 1988, coming in second in the

Democratic primaries. Despite a number of controversies through the years, Jackson has been influential and important in American politics and the civil rights movement. He continues to push for educational reforms, universal health care and enforcement of civil rights legislation. In 2000, President Bill Clinton awarded him the Presidential Medal of Honor. In the early 2000s, Jackson joined many Greenvillians to push Greenville County Council to recognize Martin Luther King Day as a paid holiday, and in 2005, Greenville became the last county in the nation to honor it as such. Jackson led rallies, marches, and created petitions asking Greenville County Council to honor the work and legacy of Dr. King. His power to inspire and motivate can be felt nationally, yet the foundation of his commitment to social justice was built right here. For more information, please call 864-294-2000 or see News and Events on furman.edu or the events calendar on yearofaltruism.org.

Hannah Mooney is a junior history major at Furman interning with Dr. Tollison at the Upcountry History Museum-Furman this semester, helping prepare for the museum’s forthcoming exhibit “Protests, Prayers, and Progress: Greenville’s Civil Rights Movement.” Dr. Courtney Tollison Hartness is an assistant professor of history at Furman and museum historian at the Upcountry History Museum.