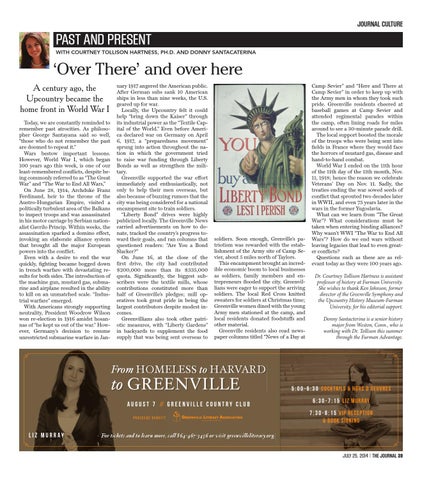 PAST AND PRESENT WITH COURTNEY TOLLISON HARTNESS, PH.D. AND DONNY SANTACATERINA

‘Over There’ and over here A century ago, the Upcountry became the home front in World War I Today, we are constantly reminded to remember past atrocities. As philosopher George Santayana said so well, “those who do not remember the past are doomed to repeat it.” Wars bestow important lessons. However, World War I, which began 100 years ago this week, is one of our least-remembered conflicts, despite being commonly referred to as “The Great War” and “The War to End All Wars,” On June 28, 1914, Archduke Franz Ferdinand, heir to the throne of the Austro-Hungarian Empire, visited a politically turbulent area of the Balkans to inspect troops and was assassinated in his motor carriage by Serbian nationalist Gavrilo Princip. Within weeks, the assassination sparked a domino effect, invoking an elaborate alliance system that brought all the major European powers into the conflict. Even with a desire to end the war quickly, fighting became bogged down in trench warfare with devastating results for both sides. The introduction of the machine gun, mustard gas, submarine and airplane resulted in the ability to kill on an unmatched scale. “Industrial warfare” emerged. With Americans strongly supporting neutrality, President Woodrow Wilson won re-election in 1916 amidst hosannas of “he kept us out of the war.” However, Germany’s decision to resume unrestricted submarine warfare in Jan-

uary 1917 angered the American public. After German subs sank 10 American ships in less than nine weeks, the U.S. geared up for war. Locally, the Upcountry felt it could help “bring down the Kaiser” through its industrial power as the “Textile Capital of the World.” Even before America declared war on Germany on April 6, 1917, a “preparedness movement” sprung into action throughout the nation in which the government tried to raise war funding through Liberty Bonds as well as strengthen the military. Greenville supported the war effort immediately and enthusiastically, not only to help their men overseas, but also because of buzzing rumors that the city was being considered for a national encampment site to train soldiers. “Liberty Bond” drives were highly publicized locally. The Greenville News carried advertisements on how to donate, tracked the country’s progress toward their goals, and ran columns that questioned readers: “Are You a Bond Slacker?” On June 16, at the close of the first drive, the city had contributed $200,000 more than its $335,000 quota. Significantly, the biggest subscribers were the textile mills, whose contributions constituted more than half of Greenville’s pledges; mill operatives took great pride in being the largest contributors despite modest incomes. Greenvillians also took other patriotic measures, with “Liberty Gardens” in backyards to supplement the food supply that was being sent overseas to

soldiers. Soon enough, Grenville’s patriotism was rewarded with the establishment of the Army site of Camp Sevier, about 5 miles north of Taylors. This encampment brought an incredible economic boom to local businesses as soldiers, family members and entrepreneurs flooded the city. Greenvillians were eager to support the arriving soldiers. The local Red Cross knitted sweaters for soldiers at Christmas time; Greenville women dined with the young Army men stationed at the camp, and local residents donated foodstuffs and other material. Greenville residents also read newspaper columns titled “News of a Day at

Camp Sevier” and “Here and There at Camp Sevier” in order to keep up with the Army men in whom they took such pride. Greenville residents cheered at baseball games at Camp Sevier and attended regimental parades within the camp, often lining roads for miles around to see a 30-minute parade drill. The local support boosted the morale of the troops who were being sent into fields in France where they would face the horrors of mustard gas, disease and hand-to-hand combat. World War I ended on the 11th hour of the 11th day of the 11th month, Nov. 11, 1918; hence the reason we celebrate Veterans’ Day on Nov. 11. Sadly, the treaties ending the war sowed seeds of conflict that sprouted two decades later in WWII, and even 75 years later in the wars in the former Yugoslavia. What can we learn from “The Great War”? What considerations must be taken when entering binding alliances? Why wasn’t WWI “The War to End All Wars”? How do we end wars without leaving legacies that lead to even greater conflicts? Questions such as these are as relevant today as they were 100 years ago. Dr. Courtney Tollison Hartness is assistant professor of history at Furman University. She wishes to thank Ken Johnson, former director of the Greenville Symphony and the Upcountry History Museum-Furman University, for his editorial support. Donny Santacterina is a senior history major from Weston, Conn., who is working with Dr. Tollison this summer through the Furman Advantage.

From HOMELESS to HARVARD