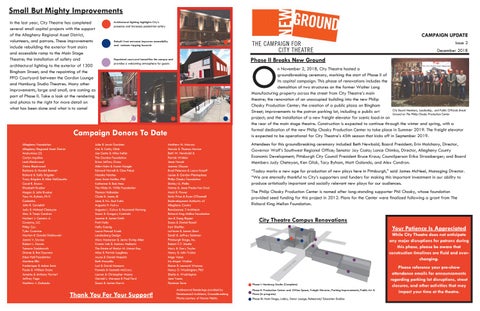 Small But Mighty Improvements In the last year, City Theatre has completed several small capital projects with the support of the Allegheny Regional Asset District, volunteers, and patrons. These improvements include rebuilding the exterior front stairs and accessible ramp to the Main Stage Theatre; the installation of safety and architectural lighting to the exterior of 1300 Bingham Street; and the repainting of the PPG Courtyard between the Gordon Lounge and Hamburg Studio Theatres. Many other improvements, large and small, are coming as part of Phase II. Take a look at the rendering and photos to the right for more detail on what has been done and what is to come!

n November 2, 2018, City Theatre hosted a groundbreaking ceremony, marking the start of Phase II of its capital campaign. This phase of renovations includes the demolition of two structures on the former Walter Long Manufacturing property across the street from City Theatre’s main theatre; the renovation of an unoccupied building into the new Philip Chosky Production Center; the creation of a public plaza on Bingham City Board Members, Leadership, and Public Officials Break Street; improvements to the patron parking lot, including a public art Ground on The Philip Chosky Production Center project; and the installation of a new freight elevator for scenic load-in on the rear of the main stage theatre. Construction is expected to continue through the winter and spring, with a formal dedication of the new Philip Chosky Production Center to take place in Summer 2019. The freight elevator is expected to be operational for City Theatre’s 45th season that kicks off in September 2019.

Thank You For Your Support!

City Theatre Campus Renovations Your Patience Is Appreciated While City Theatre does not anticipate any major disruptions for patrons during this phase, please be aware that construction timelines are fluid and everchanging.

Please reference your pre-show attendance emails for announcements regarding parking lot disruptions, street closures, and other activities that may impact your time at the theatre.

oard members Beth Newbold and Judy Cheteyan, along with their husbands, are leading the charge to close out fundraising for Phase II. In June 2018, Beth and Judy issued a challenge to their peers, looking to raise a total of $200,000 to start construction. On the heels of their successful endeavor, these leaders reflect on why City Theatre is near to their hearts.

Why is this campaign important to you?

30 Years of Support: Celebrating the Legacy of Phil Chosky

hen Marc Masterson, City’s Artistic Director, met with Phil Chosky in 1989, he was immediately struck by his intelligence and Spartan tendencies. “I was still a kid, really, meeting with this Pittsburgh giant who chose to keep the walls of his office the cinderblock the building was made from. He was definitely frugal,” Masterson said, fondly recalling Mr. Chosky’s office inside Rosedale Technical College, Chosky’s tech school formerly located on Browns Hill Road in Squirrel Hill. “I couldn’t really read whether he was interested in what we were doing, but I knew he was listening and taking it all in. It wasn’t until he pulled out his checkbook that I knew he believed in City Theatre and wanted to help. Even then, he placed the check face down on the desk until the end of our conversation and nearly forgot to hand it to me as I was leaving. I dared not look at it until I got back to the office. It turned out to be a number more generous than any I had seen up to that point.” That donation marked the turning point for City Theatre, making the company’s dream of a permanent home on the South Side a reality that would be achieved in Philip Chosky 1925-2011 1991. From that moment on, Phillip Chosky continued as an ardent fan of City Theatre, consistently supporting both the company’s artistic endeavors and capital improvement projects individually as a board member and donor and, later in his life, through his foundation. Today, a sign reading “Reserved for Phil Chosky” still hangs above a prime parking spot in City Theatre’s lot. Meryl Ainsman, Executive Director of The Philip Chosky Charitable and Educational Trust, recalls “When custody of Phil’s foundation fell to me and his friends with no real instruction on how to manage it ’What Would Phil Do’ really became the thrust of our mission. City Theatre was a part of Phil’s life for a long time, and it just seemed right to us to honor his legacy by supporting City’s capital campaign.” The Phillip Chosky Production Center will open in 2019, exactly 30 years after Mr. Chosky’s initial gift gave life to City’s South Side Campus. “It seems fitting, really,” said Masterson, “that even after Phil’s passing he is still working to make our dreams come true.”

Beth &amp; Pat: City produces high quality and thought-provoking productions under less than ideal conditions. The production center and elevator are necessary as they will allow the theatre to function more efficiently, saving much needed money and time. Judy &amp; Michael: City is where emerging and young talents come together in a safe and encouraging environment to develop new and exciting plays. We must ensure the Theatre continues growing and remains a viable artistic home for these new plays.

What spurred you to work together to create this challenge gift?

Beth &amp; Pat: The Cheteyans have been wonderful supporters and leaders at City Theatre and have been friends for many years. It seemed a logical partnership. Judy &amp; Michael: We wanted to encourage more people to join us in investing in City’s new era and future development, as well as provide a springboard to welcome our new Artistic Director, Marc Masterson.

What are your hopes for City Theatre’s future beyond NEW GROUND? Beth &amp; Pat: We hope that City Theatre can continue to be one of the country’s best homes for new plays. Judy &amp; Michael: We hope City continues identifying and producing new plays and attracting new, young, and established artists to our jewel of a theater. We think of City as a bee hive where artists, audiences and supporters find a home to nourish and expand their minds, souls, values, and imagination with plays that have meaning.

What excites you about City Theatre? Beth &amp; Pat: The quality of the staff, actors and design teams that belong to the City Theatre family. And the amazingly supportive patrons and donors that make everything we do possible. Judy &amp; Michael: The new and unique plays with incredible backdrops that make unforgettable impressions on us, on our local community and beyond. City is becoming so well known for their plays as well as for the Young Playwrights Festival, Momentum Readings, and other educational and development work.

How would you describe City Theatre’s role in Pittsburgh to a newcomer? Beth &amp; Pat: City Theatre is the place to go to spend an evening with friends and have your thoughts on the world challenged and expanded. Judy &amp; Michael: If you want to see new interpretations of happenings in our society and how the world community is evolving, you need to attend City Theatre’s plays.

What has been your favorite City Theatre moment? Beth &amp; Pat: Watching Joel introduce the subscription season with Tyrone the unpredictable puppet from Hand to God. Judy &amp; Michael: Our plays generate such a mixture of emotions, and great visual and vocal experiences that excite and impress us. Although we are a relatively small organization, we are mighty in what we produce and how we produce it. We love spreading the news about this fantastic artistic gem in Pittsburgh to anyone who will listen. 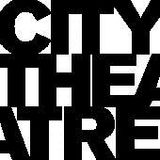