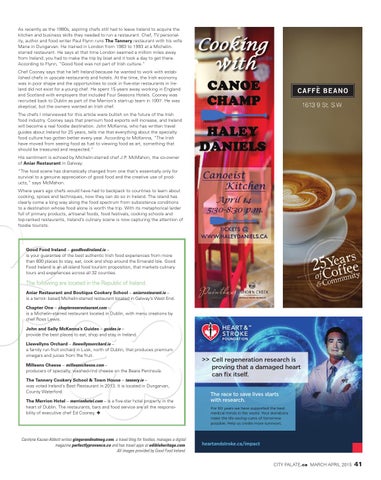 As recently as the 1980s, aspiring chefs still had to leave Ireland to acquire the kitchen and business skills they needed to run a restaurant. Chef, TV personality, author and food writer Paul Flynn runs The Tannery restaurant with his wife Marie in Dungarvan. He trained in London from 1983 to 1993 at a Michelinstarred restaurant. He says at that time London seemed a million miles away from Ireland; you had to make the trip by boat and it took a day to get there. According to Flynn, “Good food was not part of Irish culture.” Chef Cooney says that he left Ireland because he wanted to work with established chefs in upscale restaurants and hotels. At the time, the Irish economy was in poor shape and the opportunities to cook in five-star restaurants in Ireland did not exist for a young chef. He spent 15 years away working in England and Scotland with employers that included Four Seasons Hotels. Cooney was recruited back to Dublin as part of the Merrion’s start-up team in 1997. He was skeptical, but the owners wanted an Irish chef. The chefs I interviewed for this article were bullish on the future of the Irish food industry. Cooney says that premium food exports will increase, and Ireland will become a real foodie destination. John McKenna, who has written travel guides about Ireland for 25 years, tells me that everything about the specialty food culture has gotten better every year. According to McKenna, “The Irish have moved from seeing food as fuel to viewing food as art, something that should be treasured and respected.” His sentiment is echoed by Michelin-starred chef J.P. McMahon, the co-owner of Aniar Restaurant in Galway. “The food scene has dramatically changed from one that’s essentially only for survival to a genuine appreciation of good food and the creative use of products,” says McMahon. Where years ago chefs would have had to backpack to countries to learn about cooking, spices and techniques, now they can do so in Ireland. The island has clearly come a long way along the food spectrum from subsistence conditions to a destination whose food alone is worth the trip. With its metaphorical larder full of primary products, artisanal foods, food festivals, cooking schools and top-ranked restaurants, Ireland’s culinary scene is now capturing the attention of foodie tourists.

Good Food Ireland – goodfoodireland.ie – is your guarantee of the best authentic Irish food experiences from more than 600 places to stay, eat, cook and shop around the Emerald Isle. Good Food Ireland is an all-island food tourism proposition, that markets culinary tours and experiences across all 32 counties.

The following are located in the Republic of Ireland: Aniar Restaurant and Boutique Cookery School – aniarrestaurant.ie – is a terroir- based Michelin-starred restaurant located in Galway’s West End. Chapter One – chapteronerestaurant.com – is a Michelin-starred restaurant located in Dublin, with menu creations by chef Ross Lewis. John and Sally McKenna’s Guides – guides.ie – provide the best places to eat, shop and stay in Ireland. Llewellyns Orchard – llewellynsorchard.ie – a family run fruit orchard in Lusk, north of Dublin, that produces premium vinegars and juices from the fruit. Milleens Cheese – milleenscheese.com – producers of specialty, washed-rind cheese on the Beara Peninsula. The Tannery Cookery School &amp; Town House – tannery.ie – was voted Ireland’s Best Restaurant in 2013. It is located in Dungarvan, County Waterford. The Merrion Hotel – merrionhotel.com – is a five-star hotel property in the heart of Dublin. The restaurants, bars and food service are all the responsibility of executive chef Ed Cooney. ✤

&gt;&gt; Cell regeneration research is proving that a damaged heart can fix itself. The race to save lives starts with research. For 60 years we have supported the best medical minds in the world. Your donations make the life-saving cures of tomorrow possible. Help us create more survivors.

The Flavour of Calgary’s Food Scene - The Travel Issue