2016 Annual Report to the Citizens 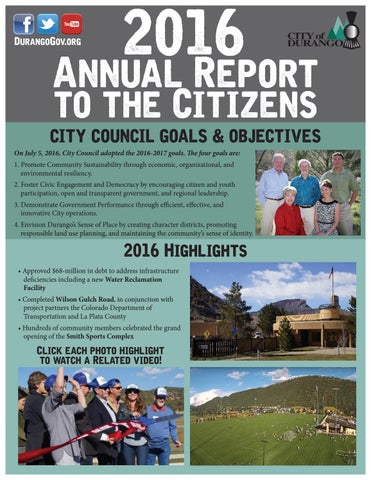 • Increased the Transit system’s efficiency by ~15% by implementing an interlined system for the loop routes and relocating Fort Lewis College stops. • Invested approximately $2.1 million in the acquisition and redevelopment of a new Durango Gymnastics facility which opens in 2017 • Completed the Santa Rita Intake-Animas River Channel Improvements Project, pictured below

• Budgeted funds for body cameras and new vehicle cameras for the Police Department • Renewed 65% of business licenses via the online process • Began the process to initiate a public portal for online business license applications • Completed critical pavement maintenance at the Durango-La Plata County Airport • Trained street crews in the recognition and mitigation of radioactive uranium tailings • Replaced the radio system, the voice recording system, and replaced/enhanced building access and video surveillance systems at the 911 Communications Center • Completed the Southfork Character District Master Plan • Developed creative ideas at the Library, including the tattoo reader’s advisory, personalized reading lists, and adding board games to the collection

Six City of Durango staff members graduated from the University of Colorado Denver Certified Public Manager program. Parks and Recreation maintained the achievement of national accreditation by the Commission for Accreditation of Park and Recreation Agencies (CAPRA) in 2016. City of Durango Planners presented about Accessory Dwelling Units at the National Planning Conference. Durango Transit was Awarded the 2016 Federal Transit Administrations Outstanding Service Award for Rural Agencies. The Records section of the Police Department was recognized by the Colorado Bureau of Investigation for their tremendous accuracy in reporting NIBRS (National Incident Based Reporting System) data related to crime reports.

The City of Durango was awarded the Government Finance Officers Association (GFOA) Certificate of Achievement for Financial Reporting for the 32nd year, and the GFOA Distinguished Budget Presentation Award for the 8th year.

The City of Durango was re-awarded the League of American Bicyclists Gold Level Bicycle Friendly Community Designation (2016-2020). City Manager Ron LeBlanc received the Leo Riethmayer Award as Public Administrator of the Year from the University of Colorado, School of Public Affairs.

• The Library circulated 370,259 materials in 2016, a decrease compared to 2015 (440,508 / 370,259). The Library changed circulation policies which contributed to a reduction in circulation, such as allowing DVDs to be checked out for two weeks instead of one. • Did you know that on average, a citizen visits the library 7-8 times per year?

• The Parks and Recreation Department attained 93% cost recovery, embodying the philosophy of providing highly participatory programs and services at an affordable cost. This means that all but 7% of the operational costs for the Community Recreation Center, Chapman Hill, and Mason Center youth and adult programs are offset by fees directly paid by the participants • Did you know that The Parks and Recreation Department leverages dedicated tax funds with grant funds to implement an extensive list of future capital improvements, estimated at $220 million? In 2016, the department managed ~$13.7M in appropriated funds for capital projects, mostly park and trail development projects, representing a ~18% increase over 2015 • The Department of Transportation and Sustainability received six grants totaling ~$2.8M for multimodal infrastructure and transit operations. The department received funding for 75% of the grants they applied for, enabling the City to implement more projects than would have otherwise been possible! Click on the photo to watch a Needham Safe Routes to School video! • Calls for police service • Calls for police service rose ~2% (39,702 / 40,673) resulting in an arrest rose from 2015 to 2016. While ~3% (6,455 / 6,643) from the percent increase is not 2015 to 2016. This is not overly large, indications cause for alarm, as the are clear the demands on increase is in line with the the police department are increased calls for service growing • Total passengers at the airport decreased &lt;1% from 2015 to 2016 (375,493 / 372,937). Passenger traffic is vitally important to the airport because it directly relates to operational budget revenue, grant funding eligibility, and it also guides long-term planning decisions

• The 2016 airport operating revenues exceeded operating expenses by a margin of ~$614K, further building a healthy operating reserve and illustrating the airport’s status as a fiscally self-sustaining enterprise fund

• Human Resources received 2,267 job applications to work for the City

• City employee participation in the Wellness Program increased by 20% • By recycling, the City saved $79,060 in landfill tipping fees due to diversion of recyclable materials from the landfill (2% less than 2015)

• The City Operations Department hauled a total of 25,146 cubic yards of trash to the landfill (+~1% from 2015), diverted a total of 3,953 tons of recycle material from the landfill (~2% • The City distributed 1.3 billion gallons less than 2015), and removed 17,620 cubic of drinking water. Click the water yards of snow (+16% from 2015) drop above to watch a video on Durango’s water • The Streets division swept 12,100 miles of streets (+~7% from 2015). Sweepers removed • In 2016, Utilities treated 8% more 4,208 tons of debris, which never made it to the gallons of wastewater than in 2015 Animas River thereby reducing water pollution (690M / 750M) Board of Ethics Community Relations Commission Design Review Board Durango-La Plata County Airport Commission Utilities Commission Library Advisory Board

Did you know 111 people volunteered on City Boards and Commissions in 2016? Visit www.DurangoGov.org/Boards for an overview of each board, the current members, and more!

• Begin construction of the Santa Rita Water Reclamation Facility, which is expected to continue into 2019. This is a major step towards completion of plant upgrades to improve effluent quality, prepare for future regulatory requirements, and to accommodate the continued growth of our community • A myriad of multi-use hard surface trail construction projects, including the section of SMART 160 Trail in Grandview and final design and construction of the initial phase of the Animas River Trail north extension

• Work towards Text to 911, the first step being an upgrade to the phone system in the 911 center • Migration of millions of digital records into one of the most robust electronic records database management system available • Continue discussions regarding potential airport terminal improvements, the ongoing Environmental Assessment, year number two of seasonal Los Angeles service, additional pavement maintenance on the taxiway, and improved Wi-Fi in the airport terminal building

• Initiation of the update of the Parks, Open Space, Trails and • New routeware software on trash and recycle trucks to help Recreation Master Plan with broad public participation increase efficiency and customer service • Complete a reorganization of the Durango Police • Map and repair many miles of storm drains Department, including hiring of Chief of Police Kamran • Complete the Comprehensive Plan Update, Housing Plan, Azfal and the appointment of four new commanders Phase II of the Stormwater Master Plan, and the North • Transit will continue work to find a long term funding Main and Camino del Rio Character District Plans solution for operations • Complete a mini-remodel of a portion of the lower level of • Work to obtain a Sustainable Tracking and Reporting the Library for more seating, shelves on wheels, and a (STAR) Community Designation smaller computer station footprint

2016 Annual Report to the Citizens