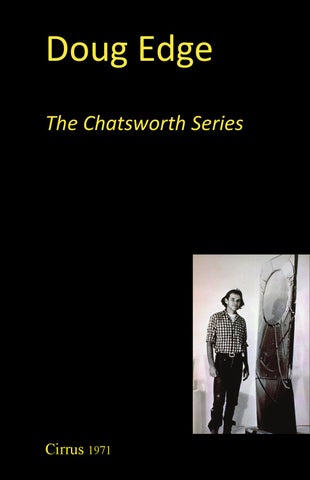 One Story About Doug Edge, in Four Parts (part one) By Shana Nys Dambrot The parts being a series of four solo exhibitions at Cirrus Gallery in 1970, 1971, 1974, and 1976. The story being a total adventure with some doubling back and some bounding ahead that has mainly to do with letting ideas dictate materials, and circumstance dictate ideas. It’s a story about art that is ahead of its time, and what it means when time finally catches up. It’s a story about staying smart but not losing your soul in the quest to be too clever. It’s about, as Edge will tell you, avoiding the trap of “hiring people to make your art for you while you hit the cocktail circuit.” Taken separately, they were four quite different exhibitions, each one representing a coinciding shift in his studio practice, each one exploring different materials, styles, and visual strategies for their own deliberate reasons. Taken together, they present a thorough real-time account of his thought process during a significant early period in his career, roughly 1969-1976 -- one in which consequential choices were made and life-changing experiences informed every aspect of his output. In the very late 1960’s, Doug Edge was living in Downtown LA with “all those guys.” That meant fellow artists like Rick Griffin, Ron Cooper, Peter Alexander, Adrian Saxe, and Terry O’Shea. They were all poking around

the Light &amp; Space department, some painting, some sculpting, some with ferocious attachments to ideas about what art should be and was not, and some making it up as they went along. Edge had enjoyed a degree of success with his experiments; he had been favorably reviewed in Artforum in 1969, and that same year the venerable William Wilson wrote in the LA Times that, with regard to the balancing acts of massiveness and ephemerality, delicacy and industrial strength, wit and wonder, that Edge succeeded at “...occasionally drawing these contradictions into balance.” High praise! So there was attention and plenty of hard work going on, but Doug Edge was also having a really good time, fine-tuning messing with people’s heads into his unique conceptual modality, as central to his operation at the physical and chemical properties of plastic and pigment. Around this time, Cirrus Editions was making a name for itself as a trusted publisher of first-rate artist print editions. At the time the shop was on Manhattan Place in Hollywood, off Melrose Ave, and founder Jean Milant had some empty space on his hands so he proceeded in starting a gallery program., Cirrus moved to Alameda Street Downtown, where it has since remained and flourished. But in the meantime, back off Melrose, Doug

Edge was getting ready to do something he’s been very good at over the years -being part of a pioneering enterprise. Doug Edge’s FIRST SHOW, in 1970, was also Cirrus Gallery’s second-ever show in its history. Edge would go on to show three more times in five years with Cirrus Gallery -- a series of exhibitions that form one of the most insightful and compelling narrative arcs in Edge’s personal art history, and in the rise of Los Angeles’ broader art history to international acclaim. It was a transitional, open-ended time in LA art, with more new materials, theories, and perspectives than most could get their arms around -- but what Edge covered at those four Cirrus shows came as close as anyone.

For SHOW #1, in 1970, Edge showed six pieces that he had made in six consecutive nights -- not because of time management issues, but as a kind of performance, albeit one that took place mostly in his head. These were his beloved and acclaimed man-sized totems, made by constructing wood-frame plinths hung with industrial strength mylar bags, into which he poured plastic resin, a lot of it. He admired them, one at a time, before pouring the next, leaving it overnight, and so on. Having set overnight, when taken out, or, more properly, unwrapped, the hulking, monochromatic, translucent

sculptures retained the creases and folds of their erstwhile casings. They stood upright, and were his own approximate height and weight, 5’ 11” and 145 pounds. They looked like spooky wax gravestones flanking the light-flooded white and empty space. They seemed to move and vibrate as their variegated surfaces caught and refracted the ambient light. They were enormous and unwieldy, but also delicate and ethereal; beautiful and organic in the way flesh is organic, but stridently artificial and probably toxic. The molded objects embrace the role of chance, expressing their imagery as embedded within themselves, in a kind of arte povera meets Finish Fetish, a distressed and lively minimalism, lush with good ideas about light, space, and non-traditional, futuristic mediums.