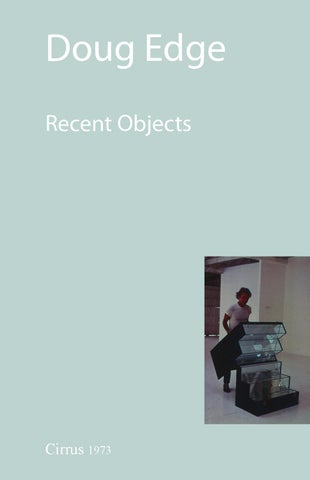 One Story About Doug Edge in Four Parts (Part Three) By Shana Nys Dambrot The parts being a group of four solo shows at Cirrus Gallery in 1970, 1971, 1974, and 1976; and the story being a conceptual and creative journey with some doubling back and some bounding ahead that has mainly to do with letting ideas dictate materials, and circumstances dictate ideas. It’s a story about staying smart but not losing your soul in the quest to be too clever. Taken separately, they were four very different shows, each one coinciding with a big shift in his life and in his art, exploring radically diverse materials and visual techniques. Taken together, they tell the real-time tale of his thinking during a seismic moment in his career, about 1969-1976 -- one in which significant changes took place, and life-altering experiences came to inform every aspect of his practice. The first show had been an ambitious undertaking; the largescale, labor-intensive, heavy in body but light on the eye, poured resin monoliths were impressively lively for the smoothness-obsessed idiom in which they were rooted. Edge was a maestro of resin, and taught plastic sculpture at Cal Arts; but by the time of the second show, Doug Edge was over plastic. It was too simple, too superficial. It had been appropriated by Pop and people were getting the wrong idea. So he returned to wood,

glass, and, perhaps most shockingly, narrative. But even that wasn’t enough of a course-correction. In 1972, he left Cal Arts and he and his family moved to Amsterdam for a year, where he had been offered a big free studio loft. He was heavily into mathematics in Holland, among other things. While residing there, he had a lot of good ideas, many of which were only sketched until he eventually returned to LA. His favorite, though, has got to be the idea for the fold-out glass staircase that became the centerpiece of SHOW #3 in 1974. With mirrors on the inside, and pretty much portable, being not overly heavy, the stairs were straight up cool, playing into ideas about spectacle, lightreflection, spatial illusion, and even, in their interactive changeability, action and performance. They so lent themselves to the theatrical, that they were used as a main element of the set in a production of Stravinsky’s “Soldier’s Story” and singled out for praise in a review by the LA Times theatre critic. Patiently waiting closed on the stage, at a climactic moment, the Devil opened them up and the whole audience gasped.

It was actually after the Stravinsky production when he showed the work at Cirrus, along with flip-books depicting Edge opening and closing the stairs, plus wall-hangings, made of linen and the same black Naugahyde that lined the boxes. Three of these abstract textile collages were hung the wall, arranged behind open mirrored stairs. They had an Alps-Horn player at the opening, and a Cal Arts piano student played Chopin on a concert grand brought in for the night. Again there were no sales. Maybe one of the wall pieces sold. But again, people loved it, and reported having a much better time than at other gallery openings or exhibitions. It is impossible to overstate the refreshing quality of these public displays given the dryness of most art being shown and talked about in the mainstream at the time. The deadpan allure, slight scent of subversion, and the sometimes more outright rebellion of the work he was making after he returned were certainly risky gestures -- but it worked. And it’s still working, because the craftsmanship is masterful. Edge’s flawless execution belies the art-historical rakishness of the jokes. Now these stairs are out of storage and being fully restored, and the flip-book will be re-published as an e-issue. That flip-book really is its own quasi-performance piece, giving audiences the missing link in the work’s magic and also a sense of it being truly finished -- which is what happens when someone plays with it. In March 2012, the work will be shown as part of Cirrus Gallery’s ongoing Pacific Standard Time programming. A work from the second show, in 1971, Pure Air Hope Chest, had been restored to glory and shown in an earlier one of these PST shows to dazzling effect, but this restoration posed particular challenges, the work having been in storage for 35 years. But still, that was nothing compared to the circumstances of its fabrication. He’d made the drawing in Holland, but he’d made the object in a Malibu trailer with almost no electricity. The sculpture’s pristine and opulent gorgeousness was its own minor miracle. Little could Edge have known, although perhaps some part of him could guess, how the salvaging and the magic would continue to unfold over time. In Amsterdam in December 1972, Edge recorded the following epiphany in his journal, the same one containing the sketches for the work he would have to come home to make. “There is no more avant-garde. The mad rush through the Sixties saw to that. What remains are a whole set of new art-making traditions to work through, along with the older traditions of painting and sculpture. All are equal as a basis and accumulate into one complex language that we, the survivors in art, will deal with.”

“With mirrors on the inside, and pre heavy, the stairs were straight up coo light-reflection, spatial illusion, and e action and performance. They so len they were used as a main element of th “Soldier’s Story” and singled out fo theatre critic. Patiently waiting closed the Devil opened them up and

etty much portable, being not overly ool, playing into ideas about spectacle, even, in their interactive changeability, nt themselves to the theatrical, that he set in a production of Stravinskyâ&amp;#x20AC;&amp;#x2122;s for praise in a review by the LA Times d on the stage, at a climactic moment, d the whole audience gasped.â&amp;#x20AC;?