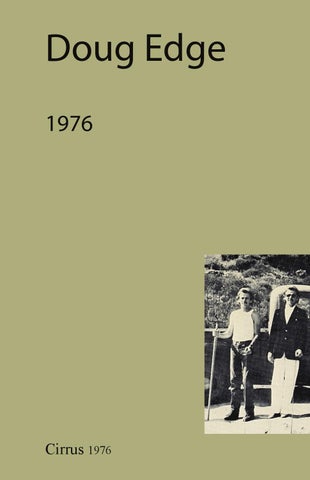 ONE STORY ABOUT DOUG EDGE, IN FOUR PARTS (PART FOUR) by Shana Nys Dambrot The four-part essay references a group of four solo shows at Cirrus Gallery in 1971, 1972, 1973 and 1976; the story being a conceptual and creative journey with some doubling back and some bounding ahead that has mainly to do with letting ideas dictate materials and circumstances dictate ideas. Considered separately, they were four very different shows. Each one coincided with a big shift in his life and in his art, exploring increasingly diverse materials and visual techniques. Taken together, they tell the real-time tale of a seismic era in Edge’s life and career.

reading and looking at art, inspiring a lot of ideas for pieces. Many of these ideas were only sketched until he eventually returned to LA, like the fold-out mirrored staircases that became the centerpieces of SHOW #3 at Cirrus, in 1974.

The first show had been an ambitious undertaking in both ideas and materials; the large-scale, laborintensive, poured resin monoliths were impressively lively. Edge was -and still is -- a maestro of resin, and established the plastics department as part of the original faculty at Calarts. By the time of the Cirrus SHOW #2, Edge was moving beyond plastic. “It had been appropriated by Pop and a lot of shiny bad plastic art started turning up.” He turned to wood, glass and, perhaps most shockingly, narrative -- but even that wasn’t enough of a course-correction. In 1972, he left Calarts and he and his family moved to Amsterdam for a year. He spent much of his time

Consider SHOW #4 in 1976, the year that found Edge back at Cirrus after another stretch of time during which his life and art-making radically changed once again. This stretch spanned a period that started with the first THRESHOLD STAIRCASE executed in his Venice studio and continued through the family move to Santa Barbara for a teaching job at UCSB. A planned house in Tuna Canyon never got built -- unless you count its legacy and influence on his subsequent sculptural investigation of architectural elements (staircase and doorway) as a theme. Partly illusionistic/partly accurate, these new things he was making made sense as both a visual and material

“When one has finished building one’s house, one suddenly realizes that in the process one has learned something that one really needed to know in the worst way -- before one began.” Friedrich Nietzsche

trope and also an allegorical framework (pun intended), for a new round of existential evaluations. Carl Jung said that to dream of building a house is indicative of working on the psyche and that resonates with Edge. “I saw staircases and ladders as symbolic of growth, like moving from one state of conscience to a higher one. Basically I was trying to heal my lack of self-confidence through the act of making.” The stars of the 1976 show were an imposing pair of Plexiglas and plywood wall-hanging isometric “starecases” titled INTROVERT and EXTROVERT. INTROVERT’s mirror components were on the inside so that the piece only reflected itself; EXTROVERT’s mirrors were on the outside of the steps and they reflected the world around. Carl Jung defined introversion as “characterised by orientation in life through subjective psychic contents.” In other words, a focus on one’s inner psychic activity; extroversion- “concentration of interest on the external object,” or the outside world. The middle ground was called “ambiversion,” and it’s not difficult to imagine Edge being amused by that linguistic construct. Ambivalent, ambiguous, ambient, ambidextrous, ambitious -- this deliberate, difficult fusion of inner and outward perception set up a worldview that is comfortable with the unresolved, the paradoxical and the open-ended. A black isometric wall hanging staircase homage to Mohammad Ali called ALI, a red one titled MAO and a very large white one (7 x 12 feet), called MEDITATIONS, blurred optical boundaries between drawing, painting and sculpture -- with the patented Doug Edge twist of wit, assigning meaning through language rather than form and dragging popular culture into the conceptual art fray. Like all of Edge’s best art and ideas, this work promised a through-line

between considerations that might seem disconnected but ultimately come to reinforce each other-- like heavy boxes of air and feathers, ladders made of glass, mirrors that reflect themselves or serious theory and irreverent humor. Critic and historian Arthur C. Danto stated that, “The seventies was a decade in which it must have seemed that history had lost its way. It had lost its way because nothing at all like a discernible direction seemed to be emerging. And then the dawning sense that the absence of direction was the defining trait of the new period.” In a way, SHOW #4 represented a total transformation away from 1970, fulfilling many promises of those early pieces -resolving opposites, being responsive to circumstance, sensing what materials “want to be” and being foxier about coaxing them into defying themselves. Finally, Edge fused real-world influences that may or may not count as narrative into comfort with ambiguity, specificity, meaning and meaninglessness.

An exhibition catalog of Doug Edge's 1976 show at Cirrus Gallery in Los Angeles. The catalog includes an essay by Shana Nys Dambrot.