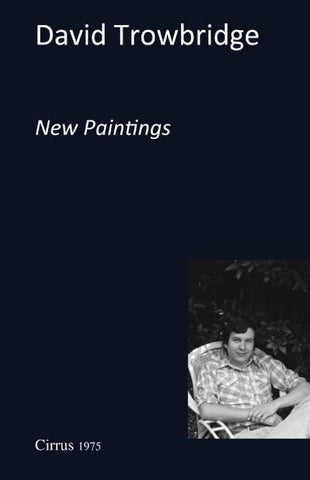 The Paintings of David Trowbridge By M. Austin Haight

By 1975 the prägnanz of David Trowbridge’s work became much more aligned with the typification of any standard painting: brush applied paint on canvas. Gone away were the past illusions of no support via the plexiglass and the theatre lights which added elements of the non-physical to his work. In Robert Morris’ 1966 Artforum essay “Notes on Sculpture 1-3”, he speaks of an artwork’s “parts…bound together in such a way that they create a maximum resistance to perceptual separation.” and in Trowbridge’s ‘75 show he does just that, taking the once separated illusions of the physical and nonphysical and binding them together in a more historically succinct fashion. As seen in his all white paintings, where the whole form is a physicality of paint on canvas, there are the similarities to his other works which tie them to Trowbridge’s hand as it is much more evident than any of his previous works. The white paint is much more fast and loose compared to the meticulousness in prior airbrushed works (see catalog for Trowbridge’s 1971 Cirrus Solo Show). But as this group of paintings, named after some of Trowbridge’s favorite Jazz musicians, plays fast and loose just like the music he was

probably listening to at the time of their creation, there still is a formal methodology to these works and a technical control similar to those musicians as well. Much like the way his previous grid works could be read as musical compositions, as referred to by critic Elena Karina Canavier, these all white paintings are produced with the flurried control and essence of Jazz music. Trowbridge uses the brush to play with the viewers’ eyes while they attempt to see if each part of the whole is a replica of one another. This similarity evokes Trowbridge’s sense of control, which still lingers in his work, never parting from his earlier days. And this control is expounded upon in this series of movement to the point of all the chaotic brush strokes only placating the grid with their sameness, yet all the while still emitting subtle differences. And concerning the resurfacing of other references,hismovementbringsback the flowing structures of his previous series which was named after native trees of Hawaii, where the artist once lived. Those pieces mimicked the same shapes and textures he once airbrushed, which is interesting to note, since wood and the painterly movement located in nature would be used by Trowbridge in his later works of canvas and wood.

Rhythm is a major element in all the paintings on display. Regardless of the rigid grid still protruding here and there in his canvases, the mood states of each of the paintings are conspicuous to the viewer. Moving between the all white paintings to the black paintings is a perceptual trip from the texture and shadows of the white to the thin and exuberant all over quality of his black paintings. Where his white paintings were concerned with a building of information in terms of rhythm and accent, these black paintings, like the one titled “Cecil Taylor” are more about expression and a freeing of Trowbridge from the grid. Cecil Taylor, the musician, was known as a pioneer of Free Jazz, and immersed himself in the energies that a piano can create, using it more like “eighty-eight tuned drums”, as he called it. Here Trowbridge follows that improvisation and riddles each stroke against the support for his paint, ridding himself of the conservative grid from prior paintings and laying black paint over dark forests of green in different amounts of application, from thin transparent swashes to thick pushes of opaqueness. This dark paint, because of its sheen, beckons to the feathery movement put forth by the artist’s brush. With so much contained in each of these darker paintings, there is not so much a violence as a perpetual swarming of the artist’s mark making, which, with his typical use of the light through plexiglass scheme, emits a confusing hail of pathways for the light to navigate before finding a place to rest on the wall behind. So much so, these paintings are evocative of Cecil

Taylor’s Free Jazz compositions which at times can seem as if nothing more than a barrage of every “tuned drum” and every note of every instrument sounding at once in one cacophonous burst. In a way, these black paintings are a suggestion to a painterly enfilade by the artist. This caterwauling between the plexiglass, paint and light shows a definitive loosening in Trowbridge’s style. What once were paintings of evident exactitude in measurement and use of the space allotted in the plexiglass are now platforms for more unspecified cases of brushwork over surface—the flicking of the horsehair, the smear and the whip. This takes the clean appearance of the plexiglass to a different rendering with facets of movement not necessarily evident in some of his earlier works. Some of the all white, opaque works are stuttered in their patterns of unruly paint application. In pieces where the paint appears to have been weaved like twine on a loom, the viewer, if knowledgeable of Trowbridge’s work, will find a likeness lending to his series from 1971, wherein the patchwork grids give an opalescent woven quality. What Trowbridge’s 1975 show at Cirrus Gallery elicits is that despite his previous exploits in disparate materials and investigations in physical/non-physical painting, he still is a painter through and through. While the plexiglass was a way for light to bring new colors from the color already placed on the invisible surface, that paint was still placed there

by the painter’s hand. It was nothing like the placement of paint like Ron Davis and his eye droppers and the placement of paint in resin or Craig Kauffman’s light traps or Larry Bell’s boxes. All three of these artists dealt with the issues of painting however only so slightly, and in such a “manufactured” manner, such that viewing their work only reminds one of the way in which a painter may elicit those same colors in the resin by acrylic or oil but not to the point of those issues actually being prevalent in the work. Trowbridge was addressing the issues of painting from the start. He focused on the paint itself and not so much the physical support that was so precedent in the past. The frame, the canvas, the stretcher bars, these elements that functioned historically as the supports of the paint were made to be absent in Trowbridge’s work such that the true elements of painting—light on paint— could be viewed without the weight of institutionalized elements. In a way, Trowbridge’s work can be elevated by its being released from these art historical boundaries. When one sees a work by Trowbridge they are viewing the essence of painting, and nothing else. He wasn’t talking about environments with his use of theatre lights like a Light &amp; Space artist may have been. There was no sculpture to David’s work, only the presence of paint within the realm of a painter.