A California Collection: The McCoys 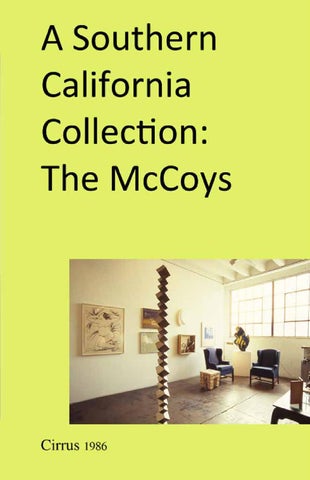 I remember when we first moved out here in the early 1960’s, there were virtually no museums showing contemporary art except for the Pasadena Art Museum, where Walter Hopps had organized, in 1962, the first retrospective ever of the work of Marcel Duchamp. Can you imagine Duchamp sitting in the oriental courtyard of the museum in conservative Pasadena, playing chess with a nude woman? Soon after that Los Angeles County opened a William Periera designed museum on Wilshire Boulevard to be exclusively devoted to art, as opposed to sharing space with the county’s Museum of Natural History, which was the previous arrangement. Now, a quarter of a century (can that be?) later, LACMA has its Anderson Wing dedicated to the exhibition of 20th century art, and promises an active program of Contemporary Art, whose “TC” (Temporary Contemporary) facility opened to the public in the fall of 1983, is now opening its more formal location in the Bunker Hill redevelopment project, a lively complex by the Japanese architect Arata Isosaki. Not only has MOCA’s presence in the Los Angeles art scene generated a substantial number of serious supporters, it has been an important contribution to the revitalization of the whole downtown area.

Back in the early 60’s exhibition spaces like the Litton Center for Visual Art and the Barnsdall Art Center mounted art exhibits as well. And the area’s art schools and university art departments played important roles in the nurturing and development of artists in Southern California. Otis’ role in the revival of ceramics as a fine art medium, under the tutelage of Peter Voulkos, is now legendary. Various art world superstars such as Ken Price, Billy Al Bengston, and John Mason were inspired early in their careers by the energy and Abstract Expressionist approach of Voulkos. In the early 1960’s Robert Irwin, teaching at Chouinard in downtown Los Angeles (funded by Disney money prior to the opening of the California Institute of the Arts) had artists as diverse as Larry Bell and Edward Ruscha in his classes. We can remember the difficulty we had with Rushca’s work when we were first exposed to it. It looked too much like advertising, not surprisingly since that was Ruscha’s first training! But his trompe l’oeil skill and sense of humor soon won us over. His early uses of commercial logos such as the Standard Station or the Spam can parallel Warhol’s use of brand images during the same period. Today’s art critics love debating about the use of media images as “appropriation,” as if the 1980’s had a corner on this sort of cultural commentary. But Rushca in California in the early 60’s was and is a pioneer of this widely acclaimed strategy of aesthetic expression.

And Ruscha’s combination of humor with elegance is unique. Among the universities that contributed to the art scene in the 60’s were UCLA and the brand new University of California, Irvine, which opened in 1965. Frederick Wright’s program of gallery exhibitions at UCLA included retrospectives of significant 20th century artists such as Henri Matisse, Jean Arp, Stanton MacDonald Wright, and Gaston Lachaise, as well as Americans such as Arthur Dove and Milton Avery. Irvine’s fledgling art department included Tony DeLap, John McCracken, Craig Kauffman, Robert Irwin, John Mason, John Paul Jones, and visiting artists such as Robert Morris and David Hockney. Many members of this group were dubbed as the “Cool School” by Philip Leider, who, like many of the artists cited above still teaches at UCI. In the magazine ARTFORUM started by Leider with backing from Cowles publishing, both he and John Coplans, the first director of UCI’s art gallery, published articles that literally put dozens of California artists into the national eye. The particular aesthetic of Irwin, Bell, McCracken, Kauffman and later Jim Turrell, utilized the light and space environment in ethereal installations that are now recognized as Southern California’s unique contribution to 20th century art history. In the 70’s a younger generation of artists emerged from the early years at Irvine, people such as Jay McCafferty, Charles Hill, Jean St. Pierre, Ned Evans, Bruce Richards, and Jerry Byrd. This group’s fascination with fragile and un-stretched surfaces, using ritualized processes such as burning and burying, they brought a unique sensibility to process ideas. St. Pierre and his fellow graduate students ran their own gallery, F Space in Costa Mesa during those years. Performance Artists Chris Burden, Barbara Smith, and Nancy Buchanan were also members of this group. In fact the roots of much performance art, as well as video, were cultivated in California soil. Burden threw the School of Fine Arts into turmoil with pieces that consisted of riding a bicycle around the gallery for eight hours and locking himself in a locker for several days. By the middle 1960’s

Alan Kaprow had settled permanently in California, where he taught first at the California Institute of the Arts and subsequently at the University of California, San Diego. During these years he organized numerous participatory happenings. His presence here remains a continuing influence on the performance scene. Like Bob Irwin, Kaprow is viewed somewhat as a guru by several generations of students. Also at UCSD, faculty member Eleanor Antin has been a nationally recognized figure in performance art. Although video as an art form, like performance, came into its own in the 1970’s, it can trace many seminal figures in Southern California whose early work was produced in the 1960’s. Among these are Bruce Nauman, John Baldessari, William Wegman, John Sturgeon, Suzanne Lacey and Paul McCartney. At Cal Arts the Feminist Teaching Program in the early 1970’s, directed by Judy Chicago and Miriam Schapiro, became a powerful catalyst for the national Feminist Movement in the arts. Chicago and Schapiro delivered lectures throughout the country having to do with their ideas about the recurrence of central core imagery in the work of women artists. Their Woman House project of 1972 involved their students in consciousness raising sessions that resulted in collaborative installations in different rooms of an old house scheduled for demolition. Numerous performances and videotapes were also presented at Woman House. The project received national coverage, and championed the legitimacy of specifically female oriented imagery in contemporary art. As with the Feminist Movement, many of the attitudes associated in the late 1970’s with the Pattern and Decoration movement, which has been politicized by critics such as Donald Kuspit and John Perrault, have their sources in California. Artists Ed Moses, Billy Al Bengston, Larry Bell and Ken Price have never been afraid of being decorative, and/ or utilitarian. Moses and Bengston have

been making decorative screens since the early 1960’s, and Bengston and Bell have produced furniture. And of course Chicago and Schapiro are viewed as the mothers of the Pattern and Decoration movement. Two other prime movers in this arena— Robert Kushner and Kim McConnell—are California born and bred. McConnell still lives and works in Southern California. Perhaps the epitome of the ability to move easily through various media can be seen in the career of Jim Ganzer, who began as a process artist in the early 70’s, then made funky-chic tables and lamps, and in the last couple of years has been extremely successful in the retail clothing market, with his JIMMY’Z line. The unselfconscious interest in and borrowing from various forms of popular culture has a long-term tradition in Southern California. In the early 60’s the Irwin/Bell/Kauffman/Bengston/ McCracken group were fascinated with the custom car culture, whose participants produced immaculately finished surfaces of intensely shimmering color. Other artists—Ron Davis and Ron Cooper, for example—borrowed from surfing culture

the fiberglass technology to produce abstract hybrid objects that hovered in between the definitions of painting and sculpture. But we all know that the art scene needs more than artists and museums. None of them could exist without a strong system of commercial galleries, critical dialogue and collectors. Even in the early decades of the 20th century European patrons and dealers—Galka Scheyer, for example, or the Arensbergs—introduced numerous significant European artists to Southern California. In fact, a chance visit to the Old Pasadena Art Museum, where the Scheyer Collection of Klee, Jawlensky, Feininger and Kandinsky caused the first stirrings of passion of German Expressionist painting in Robert Rifkind. But until recently, the serious collectors of contemporary art in Los Angeles could be counted on one hand—Robert Rowan, Fred and Marcia Weisman, Bea and Philip Gersh, and Betty Asher. However, the improved economy of the late 70’s and the 80’s has brought with it a new generation of eager

collectors, matched with a proliferation of galleries who are as interested in showing California artists as they are in presenting material from New York or Europe. Alternative spaces such as LAICA, which opened in the middle 1970’s as one of the first in the country, and LACE give greatly needed support to less well known artists. The older galleries such as Margo Leavin, James Corcoran, Ace, Newspace, Cirrus and Tortue were joined by scores of others—Asher/Faure, Rosamund Felsen, Jan Turner, Space, L.A. Louver, Koplin, Neil Ovsey, Jan Baum, Roy Boyd, Ruth Bachofner, Michael Kohn, Angles Gallery, Burnett Miller, Irit Krieger, Jeffrey Linden, Richard Greene, Karl Bornstein, Daniel Weinberg and Irving Blum, the latter bringing the art scene full circle, so to speak, to where the Ferus and Blum galleries were extremely influential in Los Angeles. Other early galleries important to the Los Angeles scene include Esther Rohles, Felix Landau, Nicholas Wilder, Riko Mizuno and Eugene Butler. Nearly every day new names are added to this list. And a new generation of artists—Jonathon

Borofsky, Alexis Smith, Mark Lere, Lari Pittman, Robert Thierren, Eric Orr, Suzanne Caporeal, Jill Greigerich, Kim Abeles, David Amico, Roger Herman, Peter Shelton, Jim Lawrence and Gillian Theobald. After three decades of observing the growing richness and diversity of the Southern California art scene, we can look back on this collection with great pleasure and pride, not only with regard to the objects themselves, but with gratitude to the many new windows of understanding that have been opened through our experience with the people involved in this art community. We even have bona fide old masters now—Sam Francis, Richard Diebenkorn, Helen Lundeberg, and Claire Falkerstein. We look with anticipation to the impact that the Getty Museum and Trust, and the newest foundation to locate in Los Angeles, the Lannan Foundation, will have on the future development of aesthetic consciousness and the amassing of important art works to be held in public trust.

A California Collection: The McCoys

Exhibition Catalog of the 1986 Show at Cirrus Gallery Los Angeles titled A California Collection: The McCoys. Includes an essay by Melinda Wortz.