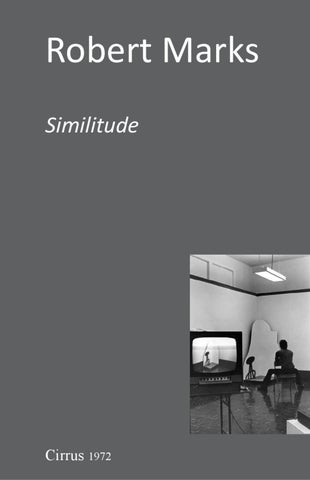 Robert Marks at Cirrus Gallery, 1972 By Andrea Joki In 1972 Robert Marks presented new works in his second solo exhibition at Cirrus Gallery. The artworks exhibited by Marks at the gallery in 1971 and 1972 reflect ideas and preoccupations of artists living and working in Los Angeles at the time, and echoes concerns seen in distinctive West Coast minimalist and conceptual art.

Identifying with his Los Angeles predecessors who, as Marks states, “took art off the canvas,” Marks’ conceptual artistic practice involves multiple processes including aluminum and acrylic glass fabrication, photography, screenprinting and painting. His earlier Euclidean-inspired language was a nod to 1960s Minimalist artists, such as Sol LeWitt and The cultural scene in Los Angeles in Donald Judd and to Joseph Albers the late 1960s and early 1970s was with his critical theories relating ripe with inventive talent. Marks to perception. However, as Marks came of age following a time when infuses his reductive language Ferus Gallery and a roster of artists with conceptual concerns that had helped lay the groundwork for grow evermore focused on reality the development of particular Los vs. illusion and presence vs. Angeles artistic styles including absence, his investigations call to assemblage with artists Walter mind seminal developments in Berman and Ed Kienholz; a West conceptual art in the 1960s and Coast minimalism in the works early 70s by artists Joseph Kosuth, of Robert Irwin, Larry Bell and Robert Morris and John Knight. Craig Kaufman; and the unique conceptual languages of Ed Ruscha Marks’ two exhibitions at the and John Baldesarri. Cirrus Gallery reveal consistent methodologies in furthering his A 1971 graduate of Chouinard conceptual inquiries of object Art Institute, Marks was part of a and shadow. However, in a space tight-knit group of artist friends of a few months, Marks makes a living and working in downtown decisive break from the language Los Angeles along Beaudry Street of cube frameworks and shadows. – each member branded on the Although his new works indicate hand with a rose tattoo known to continuity in his conceptual the group as the “Beaudry Rose.” investigations, the sculptural works Marks’ dynamic social network are no longer solely Euclideanled to his personal introduction to inspired but now take the form of a Jean Milant, and ultimately to his mundane utilitarian object, that of exhibition opportunities at Cirrus a three-legged stool. Gallery.

The installation consists of three freestanding silhouettes of threelegged stools placed at precise points on the floor of the gallery and a series of twenty-five small-scale airbrushed images encased in white shadow boxes hung sequentially and evenly spaced along one wall. In Marks’ previous installation, the artist spotlighted a 6’ x 6’ cube framework that was positioned at an angle and nestled in a triangular hole cut in the gallery floor. Marks traced and painted the cast shadows of the cube on the floor, thus fixing in time an ephemeral phenomenon. In his subsequent installation at the gallery, Marks continues his play with the object and shadow by setting a

stage of three rigid stool silhouettes. Marks carries over a reminder of his earlier geometric language with three narrow black lines painted on the floor that meet at ninety degree angles forming an open-ended rectangle. Two stool silhouettes are installed at the terminus of the lines forming the sides of the rectangle and the third is placed at the midpoint of the line that connects to the others.

Unlike Marks’ previous installation, where the lines painted on the floor or on the pedestals referred to shadows cast by three dimensional objects, in this case the lines forming the open rectangle do not refer to a specific sculptural element. Instead these painted lines refer to, as Marks calls them, “implied planes” and with this minimal gesture the artist designates space itself as an integral element for the viewer to consider. During an interview with Jean Milant in 2011, Marks recalled his methods in affecting a viewer’s interaction with a designated space:

In my early experiments, I used black electrician’s tape to mark out lines on the floor that, in effect, would create implied planes. I didn’t know if it would work or not. I observed people as they looked at my work, and noted whether or not these lines had any impact on how the viewer interacted with the space. Some didn’t notice the lines, or completely disregarded them, and others walked around the lines. If the viewer recognized the line as a boundary, to me it confirmed the presence of an implied plane. Each of the three stool silhouettes in the installation presents as if it were a stool flattened by a steamroller, then peeled up and folded from the floor like a paper doll, recalling the humorous disasters that happen in the make-believe world of cartoons. These irrational forms give one pause and are the leading props in his new series of conceptual riddles. The three-legged stool silhouettes are waist-high rigid constructions with a painted black finish. Each is folded horizontally at a ninety-degree angle

at the mid-point with the stool’s seat pointed upright and the three legs splayed out on the floor. With this simple cantilevered form, Marks has collapsed the representation of an object (a stool) and its shadow into one integrated element. Although simple in form, the stool silhouettes signify the artist’s complex conceptual inquiries into a myriad of dualities such as reality vs. illusion, presence vs. absence, and nature vs. artifice. In selecting a form that one identifies as a representation of a utilitarian object – a stool, Marks indirectly alludes to the presence (or absence) of the figure, or actor in the scene. However irrational the forms appear, Marks imposes a set of rules in the staging of these forms, placing each at a precise point along his “implied planes.” With a minimalist language, Marks constructs a thought-provoking scenario that furthers his investigation

of object and shadow and his philosophical inquiries of reality vs. illusion. Marks spoke of experiencing a moment of epiphany as a young artist when grappling with his own reality, contemplations that recall Plato and his Allegory of the Cave. When asked by Jean Milant about the significance of the shadows in relationship to the physicality of an object, Marks expressed that, for him, the shadow of an object means the object truly exists. In this installation, Marks confounds his own inquiry of reality vs. illusion by representing a three-dimensional form and (or) its shadow as a hybrid form – a flattened physical object that is untrue to the intrinsic nature of each. Although Marks insists that his ideas are straightforward and uncomplicated, a viewer that brings a knowledge of philosophy to the experience of viewing Marks’ works will be gratified by the elegance and lucidity of a visual language that may stand as a metaphor for the virtue of

human intelligence and reasoning. Marks’ thoughtful and methodical artistic process makes visible those philosophical ideas and concepts that most often remain ethereal. (Note: At the time of writing this essay, important information regarding the original 1972 installation has yet to be gathered. Significantly, images of the original two-dimensional airbrushed works remain elusive. Marks’ conceptual language infers an important relationship between the sculptural forms and the series of two-dimensional works. Therefore, an accurate and thoughtful reflection of his 1972 exhibition will be further developed once these key missing materials are rediscovered.)