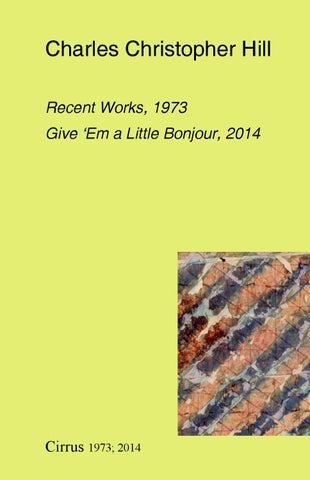 Charles Christopher Hill’s 1973 solo exhibition at Cirrus Gallery marked the beginning of his long relationship with the gallery. A native of Pennsylvania, Hill was born in 1948 in Greensburg and moved west to attend the University of California Irvine receiving his Bachelor and Master of Fine Arts in 1971 and 1973, respectively.

“junking of established values, the predilection for experimentation and an almost family-like conception of inter artist relationships.”1 New artistic styles emerged including assemblage with artists Kienholz and Berman, a West Coast minimalism in the works of Irwin, Bell and Kaufman, and the unique conceptual languages of Ruscha and John Baldessari.

Hill’s arrival at UC Irvine in the late 1960s coincided with dynamic artistic developments unique to Southern California. Los Angeles became a hot-bed of creativity influenced in part by the earlier Beat Generation, the alternative art scene from San Francisco coming down to Los Angeles in the early 1960s, and also the rise of the Ferus Gallery with a roster of visionary artists including Edward Kienholz, Wallace Berman, Ed Ruscha, Robert Irwin, Billy Al Bengston, Larry Bell, Ed Moses and others. The co-founder of Ferus Gallery, Walter Hopps, went on to direct the Pasadena Art Museum, and in 1963 organized the historically significant retrospective of the works of Marcel Duchamp.

As the cultural landscape flourished, by the late 1960s West Coast art schools, including UC Irvine, began to reinforce the region’s unique position as a propagator of new conceptual art forms. These schools recruited top talents with many of the leading artists in Southern California accepting academic positions and playing important roles in educating the next generation of artists. Notably, during Hill’s student years at UC Irvine the roster included at one time or another: University Art Gallery director John Coplan (writer/editor for Artforum), Philip Leider (editor in chief of Artforum, 1962-1971); art historians Alan Solomon and Barbara Rose; and artists Tony DeLap, John McCracken, Vija Celmins, Robert Irwin, John Mason and Ed Moses.2

The mid 1960s saw Southern California artists mining rich new terrain and producing works that embodied the ideals of a rapidly changing cultural landscape. In her essay, Experimental City, Catherine Grenier describes this unique landscape as one defined by the

large unframed works, rectangular and horizontal in format, hang on the wall like old maps. The works have irregular edges and range in size with the largest at 81”h x 103”w to the nearly square 53”h x 52”w. Each piece is made of thin fabrics and layers of delicate papers that have been sandwiched together and fixed with running stitches of thread. Hill’s rigorous abstractions on layered papers reveal his interest at the time in processes associated with “soft painting,” processes that cast aside western traditional techniques of painting. Instead, Hill constructs paintings and drawings with ephemeral materials including thin gauze fabrics, delicate newsprint papers, sewing thread and pigments. Additionally, Hill engages a

unique reductive process of burying his papers in compost piles, allowing them to break down and to acquire colorations from the alchemy of decomposing vegetation. In “Paintings from Compost,” a December 1974 Artweek article by Sandy Ballatore, Hill describes the discovery of his process: “I always had a garden. I had done a lot of paintings that were just junk, so

I took them out in the garden and threw them on the compost to hold in the heat to rot the vegetables. While they were out there, they began to look pretty fine. I realized that if they were actually under the compost, they would go even faster. “I don’t actually bury them in the ground. They’re buried in decomposing kitchen scraps, garbage, plants and lawn clippings, etc. Some pieces I actually buried in the soil, but they just got grey without any sort of colors.” 3 Hill’s experimental strategies recall archeological digs. His works are repeatedly excavated and reburied in compost until they have acquired the colorations and fragile surfaces that he desires. At times, the resultant works have the appearance of wellworn maps or tattered flags as the artist exploits natural degradations in creating rich layers of topographic information. Hill intuitively reacts to the chance marks and abrasions by adding new layers of visual information, including wide bands of applied color in shades of golden yellow, plum or indigo blue, and dense networks of stitched lines. In some works, the stitched lines are of the same hue as the earthy patina of the paper, adding to the subtle and complex array of surface variations. In others, stitched lines of bold color, including red, green or blue, are used as elements in a geometric composition like that of a quilt. A powerful effect of Hill’s work – with the distressed surfaces, tattered edges, muted colors and stitchery – is its evocation of time as each piece echoes a mysterious past, like an artifact uncovered from some long forgotten settlement. A sense of mystery also arises from the materials embedded in Hill’s compositions. Upon close examination, one may

notice fragments of newspapers with Chinese characters or data from the financial pages. Depending on a viewer’s linguistic or financial literacy, these elements either convey particular meaning or simply read as part of the painter’s palette. It’s clear that mystery spurs research, and thorough research and writing are the cornerstones of passing knowledge from one generation to the next. With an illustrious international career, Hill continues to live and work in Los Angeles. The opportunity to interview Hill would most definitely provide valuable insights to his inspirations, his practice, and his artistic evolution. (Several attempts were made to connect with Hill by telephone, email and through his gallery during the writing of this essay.) Fortunately, Ballatore’s 1974 article includes a few statements by Hill as a young artist that reveal his own collector’s mentality at the time and his taste for objects with a sense of history: “I don’t like new things. I don’t have a new car. I don’t like new clothes. I like things that look like they’ve been around for awhile, but have been taken care of. I never throw anything away. I collect clothes. I buy something I really like and never wear it.”4 When placing Hill’s work in an American art historical context, a tendency might be to trace a lineage to 1950s New York artists like Jasper Johns and Jackson Pollock with an “over-all” style or 1960s artist Eva Hess with her more emotionally charged postminimalist works. However, Hill’s works should also be interpreted within the context of the cultural landscape of southern California and in light of other important Los Angeles artists, especially Ed Moses – Hill’s mentor and friend. In reviewing several exhibitions related to the Getty Center’s “Pacific Standard Time,” New York Times art critic Roberta Smith comments on the “narrowing and ordering of the historicizing process,” one that for decades imposed a New York-centric narrative on post-war

American art history.5 Hill’s work is better understood within the tableau of significant artistic developments unique to southern California, beginning with his early education at UC Irvine and continuing as a mature artist contributing and responding to the dynamic cultural landscape of Los Angeles. Cirrus Gallery’s 1973 exhibition of Hill’s evocative works is a notable marker in the artists early career, one that links him to a lineage of Angeleno artists known for experimentation, innovation and a distinct disregard for traditional rules about artmaking. Hill draws from significant art historical contexts and regional influences in developing his own unique visual language. With a heightened sensitivity to materials and process, and a clear joy in experimentation, Hill makes his mark with works that continue to delight as relics from an elusive past.

Cirrus Gallery is very pleased to present Give ‘Em a Little Bonjour, an exhibition of seminal works from the 1970s by Charles Christopher Hill. While some of the pieces in the exhibition have never been exhibited, this will be the first comprehensive look at the work Hill produced during this period. The show will be open from March 8 and will run through May 3, with a reception from 6 - 8pm on Saturday, March 8. Charles Hill was an important figure in post-minimalist art in Southern California whose dilapidated and distressed surfaces from the 70s helped redefine painting in Los Angeles. Having received both is BA and MFA under the guidance of Vija Celmins, Craig Kauffman, Robert Irwin, and Ed Moses in the late 60s and early 70s, Hill was greatly influenced by his time at the University of California,Irvine. He and peers Chris Burden, Alexis Smith, and Barbara Smith helped distinguish the university as a hub for experimentation and a landmark in the development of Southern California art. In a move from hard-edged abstraction, Hill became interested in both the physical and aesthe¬tic quality of newsprint, and the purposeful transformation of throw-away materials. He began stitching paper, cheesecloth and rags, only to see them buried in compost for several days. The result of this reductive process was a subliminal deconstruction of the act of painting; an act which was to be further reinforced by Paul McCarthy’s 1995 video, Painter, and one that was also shared by fellow artists Karen Carson, Ed Moses, Jay McCafferty, Allan McCollum, Robert Overby, Peter Plagens and Tom

Wudl. These artists helped situate the unstretched works among a dialogue of other West Coast artists, such as the Fetish Finish and Light and Space artists, who similarly sought to challenge both the art market and the act of painting. Charles Hill’s concerns echoed in many ways those of the Supports/ Surfaces movement in the South of France. In 1977, Dr. Jean-Luc Bordeaux of Cal State Northridge and Jean-Francois de Canchy and Alfred Pacquement of the Centre Pompidou curated a show, Unstretched Surfaces. The exhibition, which was proposed by Peter Plagens and Robert Smith, paralleled both the social and material concerns of several LA artists to those of their French counterparts. The exhibition took place at the Los Angeles Institute of Contemporary Art and likened Hill’s work to that of Daniel Dezeuze and Jean-Pierre Pinceman. Much of the material interests of the Supports/Surfaces and LA based artists from the late 60s and 70s are still witnessed today. Whether it’s by means of nature’s alchemy or the digital process, artists continue to evade the conventions of painting. As the exhibition title suggests, Give ‘Em a Little Bonjour can be seen as a timely look at the foundations of the current influx of material-driven abstraction, as practiced by young artists today. Charles Hill was born in Pennsylvania and currently resides in Los Angeles. He has shown at Cirrus Gallery, Baudoin Lebon, Galerie Krebs, Centre d’action Culturelle de Saint Brieuc, Galleria Del Cavallino, and Leslie Sacks. His work can be found in a number of private collections as well as the Los Angeles County Museum of Art, the Centre Georges Pompidou, TotalContemporaryArt Museum, in Seoul, the Guggenheim, the Museum of Modern Art, the Museum Moderner Kunst Stiftung Ludwig in Wien, Austria and the Musée des Beaux Arts in Angers, France.

Give â&#x20AC;&#x2DC;Em a Little Bonjour Installation