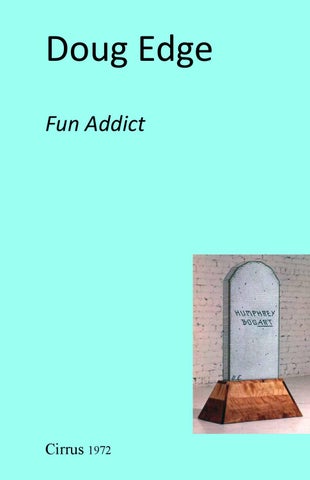 The four-part essay references a series of four solo exhibitions at Cirrus Gallery in 1971, 1972, 1973 and 1976. The story is a total adventure with some doubling back and some bounding ahead that has mainly to do with letting ideas dictate materials and circumstance dictate ideas. “I was always in hot water working like that until recently where it seems that many younger artists have taken up the cause. I think it’s a reaction to the extreme commercialism and branding of today’s art world. It’s also a way of illustrating the fact that there is no longer a dominant art philosophy to reflect or challenge since now all philosophies and modes of art-making are equal.” Edge was one of the first artists to take that more intuitive tack, in what he sees as possibly his most important contribution to the ongoing visual dialogue. So, in a very real way, it’s a story about art that is ahead of its time and what it means when time finally catches up.

Taken separately, these were four very different shows, each one coinciding with a big shift in his studio practice; each exploring different materials, styles and visual strategies. Taken together, they give a real-time account of his thinking during a prolific time in his blossoming career. The first show with Cirrus had been a mammoth undertaking and had staked a very hefty, physically powerful presence in the space and in the discourse. Edge was (and still is, despite the subsequent diversity of his work) known to be a maestro of resin. He taught plastic sculpture at Cal Arts, where he was a founding member of the faculty. But increasingly, he was also developing his rep as the kind of artist who took risks and good-naturedly blew off the rules. By the time of SHOW #2, Edge was over plastic for the moment. “It was too simple, too superficial. It had been appropriated by Pop and a lot of banal, bad plastic art arrived on the scene.” So he moved on

to wood and glass, and shockingly enough, to overt commentary and maybe worst of all, to puns along the same lines of thought that were prevalent in his 1969 show at Mizuno Gallery. For SHOW #2 with Cirrus, in 1972, he installed two ladders, a hope chest, a tombstone, a vanity, a justice balance and a box of feathers. ACTION OVER FRUSTRATION, one of the ladders, was covered in rocks with the words “Action Over Frustration” (borrowed from Nietzsche), painted on a piece of glass that completely covered the ladder. To climb the ladder, one would have to break the glass. DON’T LEAD DON’T FOLLOW -- the other ladder-- also taken from a Nietschze line-- was made out of 3/4-inch polished plate glass. It was climb at your own risk. A video piece was made of the ACTION OVER FRUSTRATION ladder in the desert where Edge threw rocks at the piece until the glass was broken and he was then able to climb it. SELF-HATE VANITY was a vanity mirror made with bulletproof glass. Edge says, “One has to be quite vain to hate oneself. With this mirror one could shoot one’s image, but the bullet would never get to the reflection.” The show also featured the CIGARETTE TOMBSTONE. Its original incarnation was shown at the first faculty art show ever at Cal Arts. The glass tombstone was filled with filtered cigarettes, forming a honeycomb pattern and

interrupted by the words “Indian Revenge,” spelled out in unfiltered cigarettes. “The Indians were the ones to introduce the European conqueror to the pleasures of tobacco. Someone vandalized it, presumably to get some cigarettes.” The restored piece was then shown in SHOW #2 at Cirrus, the words in the tombstone now being “Humphrey Bogart,” where the word “art” was underlined in unfiltered Pall Malls. A lot of the art Edge was producing and showing at the time was about both making and taking breaks, break-ins, brokenness, theft, escape, accidental destruction and pointed word-play. However, there was a parallel yet interwoven dimension about a Buddhist acceptance of the unpredictable action of chance. He showed the charming, elegant and curious BOX OF FEATHERS, which was made with sixty-six sheets of window glass with feathers (owl and quail, predator and prey) sandwiched flat in between them, creating a refractive and magical poetic expression of nature, death, symbolism and bouncing light. The show also featured the legendary PURE AIR HOPE CHEST -- a bright, luxurious and absurdly gorgeous piece of plastic sculpture fitted with industrial air filters just inside the top. “I have always thought of it as a prayer for the future in object form.” It was exhibited again in 2011 as part of the Cirrus Gallery’s expansive Pacific Standard Time programming. Sweetly witty and lovingly made like BOX OF FEATHERS, it pondered the impossible desire to render air and

light and the colorful emotions of capricious perceptions within the land-locked constraints of fabricating “permanent” objects out of fragile, breakable materials. The Mystic Knights of the Oingo Boingo performed at the opening. Lori Erenberg did a striptease in a gorilla costume and Marie Elfman did a Dietrich number -- two of several wonderful acts that performed. However, when it comes to art -- humor and exuberant display are not always appreciated-- especially in the rarefied atmosphere of Conceptualism. To Edge it’s just another element artists can use to get their point across. He likes to make art that is exciting to think about AND to look at. Back in 1968, for example, Edge made the BEAUDRY CHAIR. He didn’t feel like inventing another new shape after the current shape and mold he had been working with had run its course and wanted to see if he could imbue a common object with a fresh beauty and an emotional punch. “Leaving it with no seat made it absurd and the Atom Bomb image silk screened on the back added the ultimate absurdity.” It was being shown again in the Pacific Standard Time / Eugenia Butler-inspired survey show “Perpetual Conceptual” in 2012 at the time of this writing. And then of course there was the EARTH, SEED AND WATER BUS BENCH containing water, soil and grass seed, all ready to become life if the piece were ever to be destroyed. A bus bench is a place where people wait for the bus. On Edge’s bench, it is the elements of nature that are waiting to go home.