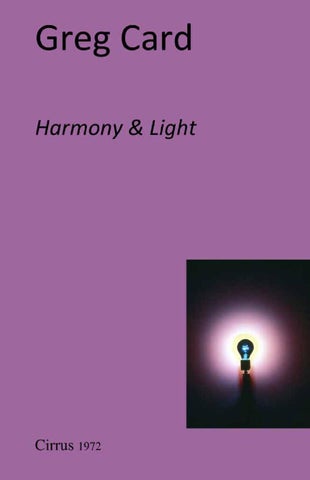 “The installation I did (in 1971) at the 708 location (708 North Manhattan Place in Hollywood) was a very minimal use of existing space as an enclosed stage; like something for a one act play without any props, just dramatic lighting falling on the walls. Yet what was visible gave no real clue as to what was supposed to happen, if anything, within the room. This had to be discovered by the viewer on their own.” ¹ To make this seemingly mysterious work Card used Dicroic filters and quartz projectors distributed throughout the gallery to project elaborately layered, multi-colored configurations along the gallery’s south wall. The effect was of a mural, a “Non-objective light painting.” The above-mentioned secret, the ‘magic,’ if you will, of this installation lay in the even distribution of light sources around the space: if the viewer should choose to walk along the mural wall these lights “would produce overlapping colors and shapes within the projections,” these mutations would continue as the viewer moved through the space. Card made no attempt to encourage a viewer to access this event or situation, and nor did his installation discourage one from approaching the wall, thus the choice was up to the individual and

to luck. A sort of shadow theater with real bodies rather than puppets is how he described this in a 1996 statement to gallery owner Jean Milant. To complete his transformation of the space, Card covered the gallery windows with black polyethylene sheeting; in his mind this “...made a large white container with reflective black accents” of the room. Backing up a little, in 1970 Greg Card was one among a small group of friends, including Terry O’Shea, Doug Edge and Bob Marks, who approached Jean Milant about making use of an unused portion of his workshop. At the time Milant’s recently opened Cirrus Editions, Ltd. occupied half the building at 708 North Manhattan Place. (The ‘empty’ half was used as storage for, among other things, Ed Ruscha’s 1940’s era Ford Coupe.) The group offered to rehabilitate this large space as a gallery, making a deal with Milant that they would drywall the space, paint the floors and walls and then turn the space over to Milant as a gallery. In return Milant would lend the space and buy the materials. Card, in a 1996 statement, noted that this established the largest uninterrupted exhibition space in a commercial gallery in Los Angeles and would remain so for several years. The dimensions of the room were

30’ x 60’ x 12’ and, since galleries in Los Angeles were more suited to showing modest sculpture or flat work, this would offer artists an opportunity to indulge their growing interest in showing larger work and working in installation. The resulting temporary artist’s space Card called Virgin Space and under this name Card’s 1971 exhibition was presented. Subsequent exhibitions of work by Doug Edge and Terry O’Shea were presented by Milant under the current name, Cirrus Gallery. For several years prior to this 1971 show Card had been experimenting with materials that would transmit and/ or reflect colored light. One early body of work featured colored, translucent lacquer air-gunned onto plexiglass cylinders, making paintings as continuous tube shapes of color, transparent and yet also shiny enough to transmit one shade and reflect a second. In another series that continued alongside his light work for the 1971 show, Card cast colored and clear resin into rectangular painting shapes. Once again for these pieces Card was working within a physical space rather than applying color to the surface. Light was caught by and reflected from the interior of these castings. It seems that what Card treasured most in these early physical and light-based works was the ability they gave him to alter a viewer’s experience of color and of space. For “Harmony and Light,” his 1972 exhibition with Cirrus, Card furthered his

explorations into light as the material of art. He fixed colored light bulbs on the gallery walls as individual wall sculptures, and in a few larger wall installations colored light was projected at complex star-shaped symbols which were made using dyed wool yarn suspended on pins. His ideas for these large works Card refined by making modestly sized works on paper, the finished drawing was then transferred to the gallery wall. These smaller works were not shown but were retained by the artist as a record of the installation. Card developed his symbols by assigning points around the perimeter of a rectangle or square in a harmonic sequencing derived using the Fibonacci Sequence. These individual points were then connected with lines of colored wool yarn. Once again shadows played a large part in the viewers’ experience of the work - the string pieces especially made subtle use of light and shadow to confuse the viewer’s perception of which plane the work might occupy, and coupled with the projected colored light from the bulbs any shadows cast by gallery visitors would be cast in various colors within the projections and on the surrounding walls. In these light-based exhibitions, as in later exhibitions of sculptures that also tricked a viewer’s senses, there was the possibility that a viewer’s behavior might be changed; a visitor might ask him or herself, “Am I walking toward a reflection? “Will I bump into whatever this is?” “Is my shadow telling me the truth?” “What might it look like if I wave

Luhun Bulb Piece 1972 my hands?” Such an experience could alter the regular gallery activity of confronting a work briefly then moving on once the experience has been digested. In this way Card’s reference to theater feels apt - the gallery might become a stage where light is directing the action, and gallery visitors would become players as much as viewers. ¹ Greg Card in “The Arena of Possibilities,” a 1996 correspondence with Jean Milant.