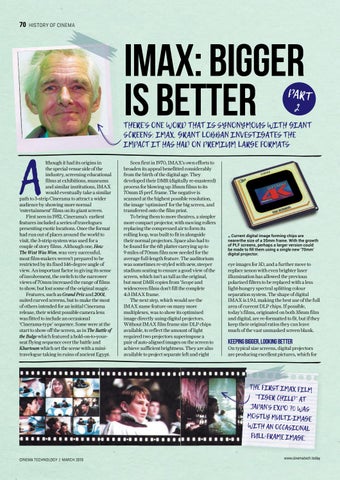 lthough it had its origins in the special venue side of the industry, screening educational films at exhibitions, museums and similar institutions, IMAX would eventually take a similar path to 3-strip Cinerama to attract a wider audience by showing more normal ‘entertainment’ films on its giant screen. First seen in 1952, Cinerama’s earliest features included a series of travelogues presenting exotic locations. Once the format had run out of places around the world to visit, the 3-strip system was used for a couple of story films. Although one, How The West Was Won, was very successful, most film-makers weren’t prepared to be restricted by its fixed 146-degree angle of view. An important factor in giving its sense of involvement, the switch to the narrower views of 70mm increased the range of films to show, but lost some of the original magic. Features, such as Grand Prix and 2001, suited curved screens, but to make the most of others intended for an initial Cinerama release, their widest possible camera lens was fitted to include an occasional ‘Cinerama-type’ sequence. Some were at the start to show off the screen, as in The Battle of the Bulge which featured a hold-on-to-yourseat flying sequence over the battle and Khartoum which set the scene with a minitravelogue taking in ruins of ancient Egypt.

THERE’S ONE WORD THAT IS SYNONYMOUS WITH GIANT SCREENS: IMAX. GRANT LOBBAN INVESTIGATES THE IMPACT IT HAS HAD ON PREMIUM LARGE FORMATS Seen first in 1970, IMAX’s own efforts to broaden its appeal benefitted considerably from the birth of the digital age. They developed their DMR (digitally re-mastered) process for blowing up 35mm films to its 70mm 15 perf. frame. The negative is scanned at the highest possible resolution, the image ‘optimised’ for the big screen, and transferred onto the film print. To bring them to more theatres, a simpler more compact projector, with moving rollers replacing the compressed air to form its rolling loop, was built to fit in alongside their normal projectors. Space also had to be found for the 6ft platter carrying up to 9 miles of 70mm film now needed for the average full-length feature. The auditorium was sometimes re-styled with new, steeper stadium seating to ensure a good view of the screen, which isn’t as tall as the original, but most DMR copies from ’Scope and widescreen films don’t fill the complete 4:3 IMAX frame. The next step, which would see the IMAX name feature on many more multiplexes, was to show its optimised image directly using digital projectors. Without IMAX film frame size DLP chips available, to reflect the amount of light required two projectors superimpose a pair of auto-aligned images on the screen to achieve sufficient brightness. They are also available to project separate left and right

Current digital image forming chips are nearerthe size of a 35mm frame. With the growth of PLF screens, perhaps a larger version could be made to ﬁll them using a single new ‘70mm’ digital projector.

eye images for 3D, and a further move to replace xenon with even brighter laser illumination has allowed the previous polarised filters to be replaced with a less light-hungry spectral splitting colour separation system. The shape of digital IMAX is 1.9:1, making the best use of the full area of current DLP chips. If possible, today’s films, originated on both 35mm film and digital, are re-formatted to fit, but if they keep their original ratios they can leave much of the vast unmasked screen blank.