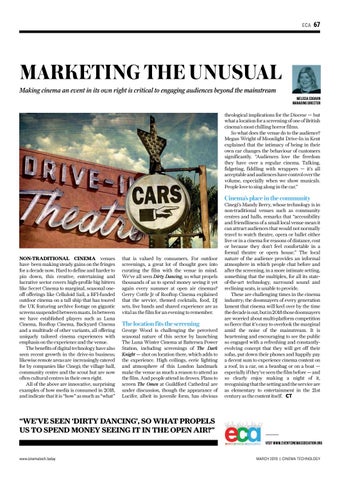 theological implications for the Diocese — but what a location for a screening of one of British cinema’s most chilling horror films. So what does the venue do to the audience? Megan Wright of Moonlight Drive-In in Kent explained that the intimacy of being in their own car changes the behaviour of customers significantly. “Audiences love the freedom they have over a regular cinema. Talking, fidgeting, fiddling with wrappers — it’s all acceptable and audiences have control over the volume, especially when we show musicals. People love to sing along in the car.”

Cinema’s place in the community

NON-TRADITIONAL CINEMA venues have been making steady gains on the fringes for a decade now. Hard to define and harder to pin down, this creative, entertaining and lucrative sector covers high-profile big hitters like Secret Cinema to marginal, seasonal oneoff offerings like Celluloid Sail, a BFI-funded outdoor cinema on a tall ship that has toured the UK featuring archive footage on gigantic screens suspended between masts. In between we have established players such as Luna Cinema, Rooftop Cinema, Backyard Cinema and a multitude of other variants, all offering uniquely tailored cinema experiences with emphasis on the experience and the venue. The benefits of digital technology have also seen recent growth in the drive-in business; likewise remote areas are increasingly catered for by companies like Cinegi; the village hall, community centre and the scout hut are now often cultural centres in their own right. All of the above are innovative, surprising examples of how media is consumed in 2018, and indicate that it is “how” as much as “what”

that is valued by consumers. For outdoor screenings, a great lot of thought goes into curating the film with the venue in mind. We’ve all seen Dirty Dancing, so what propels thousands of us to spend money seeing it yet again every summer at open air cinemas? Gerry Cottle Jr of Rooftop Cinema explained that the service, themed cocktails, food, DJ sets, live bands and shared experience are as vital as the film for an evening to remember.

The location fits the screening

George Wood is challenging the perceived seasonal nature of this sector by launching The Luna Winter Cinema at Battersea Power Station, including screenings of The Dark Knight — shot on location there, which adds to the experience. High ceilings, eerie lighting and atmosphere of this London landmark make the venue as much a reason to attend as the film. And people attend in droves. Plans to screen The Omen at Guildford Cathedral are under discussion, though the appearance of Lucifer, albeit in juvenile form, has obvious

Cinegi’s Mandy Berry, whose technology is in non-traditional venues such as community centres and halls, remarks that “accessibility and friendliness of a small local venue mean it can attract audiences that would not normally travel to watch theatre, opera or ballet either live or in a cinema for reasons of distance, cost or because they don’t feel comfortable in a formal theatre or opera house.” The local nature of the audience provides an informal atmosphere in which people chat before and after the screening, in a more intimate setting, something that the multiplex, for all its stateof-the-art technology, surround sound and reclining seats, is unable to provide. These are challenging times in the cinema industry; the doomsayers of every generation lament that cinema will keel over by the time the decade is out, but in 2018 those doomsayers are worried about multi-platform competition so fierce that it’s easy to overlook the marginal amid the noise of the mainstream. It is heartening and encouraging to see the public so engaged with a refreshing and constantlyevolving concept that they will get off their sofas, put down their phones and happily pay a decent sum to experience cinema content on a roof, in a car, on a beanbag or on a boat — especially if they’ve seen the film before — and so clearly enjoy making a night of it, recognising that the setting and the service are as elementary to entertainment in the 21st century as the content itself.

“WE’VE SEEN ‘DIRTY DANCING’, SO WHAT PROPELS US TO SPEND MONEY SEEING IT IN THE OPEN AIR?” visit www.eventcinemassociation.org