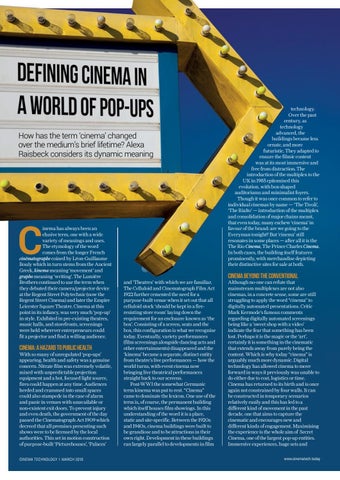 How has the term ‘cinema’ changed over the medium’s brief lifetime? Alexa Raisbeck considers its dynamic meaning

inema has always been an elusive term, one with a wide variety of meanings and uses. The etymology of the word comes from the longer French cinématographe coined by Léon-Guillaume Bouly which in turn stems from the Ancient Greek, kinema meaning ‘movement’ and grapho meaning ‘writing’. The Lumière Brothers continued to use the term when they debuted their camera/projector device at the Regent Street Polytechnic (now the Regent Street Cinema) and later the Empire Leicester Square Theatre. Cinema at this point in its infancy, was very much ‘pop-up’ in style. Exhibited in pre-existing theatres, music halls, and storefronts, screenings were held wherever entrepreneurs could fit a projector and find a willing audience.

Cinema: A hazard to public health With so many of unregulated ‘pop-ups’ appearing, health and safety was a genuine concern. Nitrate film was extremely volatile, mixed with unpredictable projection equipment and a hot, focused light source, fires could happen at any time. Audiences herded and crammed into small spaces could also stampede in the case of alarm and panic in venues with unavailable or non-existent exit doors. To prevent injury and even death, the government of the day passed the Cinematograph Act 1909 which decreed that all premises presenting such shows were to be licensed by the local authorities. This set in motion construction of purpose-built ‘Picturehouses’, ‘Palaces’ CINEMA TECHNOLOGY

technology. Over the past century, as technology advanced, the buildings became less ornate, and more futuristic. They adapted to ensure the filmic content was at its most immersive and free from distraction. The introduction of the multiplex to the UK in 1985 epitomised this evolution, with box-shaped auditoriums and minimalist foyers. Though it was once common to refer to individual cinemas by name — ‘The Tivoli’, ‘The Rialto’ — introduction of the multiplex and consolidation of major chains meant, that even today, many eschew ‘cinema’ in favour of the brand: are we going to the Everyman tonight? But ‘cinema’ still resonates in some places — after all it is the The Rio Cinema, The Prince Charles Cinema. In both cases, the building itself features prominently, with merchandise depicting their distinctive sites for sale at both.

Cinema beyond the conventional and ‘Theatres’ with which we are familiar. The Celluloid and Cinematograph Film Act 1922 further cemented the need for a purpose-built venue when it set out that all celluloid stock ‘should be kept in a fireresisting store room’ laying down the requirement for an enclosure known as ‘the box’. Consisting of a screen, seats and the box, this configuration is what we recognise today. Eventually, variety performances (film screenings alongside dancing acts and other entertainments) disappeared and the ‘kinema’ became a separate, distinct entity from theatre’s live performances — how the world turns, with event cinema now bringing live theatrical performances straight back to our screens. Post-WWI the somewhat Germanic term kinema was put to rest. “Cinema” came to dominate the lexicon. One use of the term is, of course, the permanent building which itself houses film showings. In this understanding of the word it is a place, static and site-specific. Between the 1920s and 1940s, cinema buildings were built to be grandiose and to be attractions in their own right. Development in these buildings ran largely parallel to developments in film

Although no-one can refute that mainstream multiplexes are not also cinemas, in a concrete sense, some are still struggling to apply the word “cinema” to digitally automated presentations. Critic Mark Kermode’s famous comments regarding digitally automated screenings being like a ‘sweet shop with a video’ indicate the fear that something has been lost. Perhaps it is the magic or the ‘art’, certainly it is something in the cinematic that extends away from purely being the content. Which is why today “cinema” is arguably much more dynamic. Digital technology has allowed cinema to move forward in ways it previously was unable to do either due to cost, logistics or time. Cinema has returned to its birth and is once again not constrained by four walls. It can be constructed in temporary scenarios relatively easily and this has led to a different kind of movement in the past decade, one that aims to capture the cinematic and encourages new and different kinds of engagement. Maximising the experience is the whole aim of Secret Cinema, one of the largest pop-up entities. Immersive experiences, huge sets and www.cinematech.today