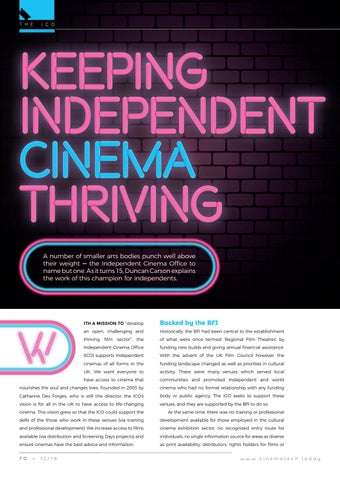 KEEPING INDEPENDENT CINEMA THRIVING A number of smaller arts bodies punch well above their weight — the Independent Cinema Office to name but one. As it turns 15, Duncan Carson explains the work of this champion for independents.

ITH A MISSION TO “develop

Backed by the BFI

an open, challenging and

Historically, the BFI had been central to the establishment

of what were once termed ‘Regional Film Theatres’ by

With the advent of the UK Film Council however, the

cinemas of all forms in the

funding landscape changed as well as priorities in cultural

UK. We want everyone to

activity. There were many venues which served local

communities and promoted independent and world

nourishes the soul and changes lives. Founded in 2003 by

cinema who had no formal relationship with any funding

Catharine Des Forges, who is still the director, the ICO’s

body or public agency. The ICO seeks to support these

venues, and they are supported by the BFI to do so.

cinema. This vision grew so that the ICO could support the

At the same time, there was no training or professional

skills of the those who work in these venues (via training

development available for those employed in the cultural

available (via distribution and Screening Days projects) and

individuals, no single information source for areas as diverse

ensure cinemas have the best advice and information.

as print availability, distributors, rights holders for films or