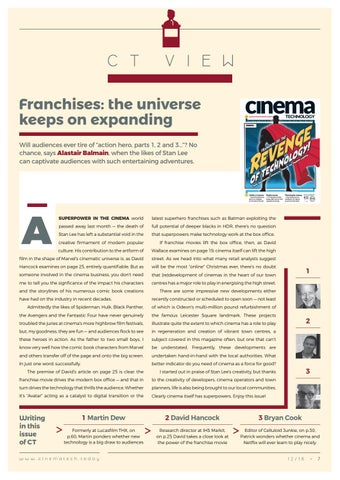 Franchises: the universe keeps on expanding Will audiences ever tire of “action hero, parts 1, 2 and 3…”? No chance, says Alastair Balmain, when the likes of Stan Lee can captivate audiences with such entertaining adventures.

Could the streaming giant and exhibitors be the best of friends?

Produced in partnership with:

How today's cinema developers are helping to save the high street

superpower in the cinema world

latest superhero franchises such as Batman exploiting the

passed away last month — the death of

full potential of deeper blacks in HDR, there’s no question

Stan Lee has left a substantial void in the

that superpowers make technology work at the box office.

If franchise movies lift the box office, then, as David

culture. His contribution to the artform of

Wallace examines on page 19, cinema itself can lift the high

film in the shape of Marvel’s cinematic universe is, as David

street. As we head into what many retail analysts suggest

Hancock examines on page 25, entirely quantifiable. But as

will be the most “online” Christmas ever, there’s no doubt

someone involved in the cinema business, you don’t need

that (re)development of cinemas in the heart of our town

me to tell you the signficance of the impact his characters

centres has a major role to play in energising the high street.

and the storylines of his numerous comic book creations have had on the industry in recent decades.

of which is Odeon’s multi-million pound refurbishment of

the Avengers and the Fantastic Four have never genuinely

but, my goodness, they are fun — and audiences flock to see

in regeneration and creation of vibrant town centres, a

these heroes in action. As the father to two small boys, I

subject covered in this magazine often, but one that can’t

know very well how the comic book characters from Marvel

be understated. Frequently, these developments are

and others transfer off of the page and onto the big screen.

undertaken hand-in-hand with the local authorities. What

In just one word: successfully.

better indicator do you need of cinema as a force for good?

The premise of David’s article on page 25 is clear: the

I started out in praise of Stan Lee’s creativity, but thanks

franchise movie drives the modern box office — and that in

to the creativity of developers, cinema operators and town

turn drives the technology that thrills the audience. Whether

planners, life is also being brought to our local communities.

Clearly cinema itself has superpowers. Enjoy this issue!

Writing in this issue of CT

Formerly at Lucasfilm THX, on p.60, Martin ponders whether new technology is a big draw to audiences

Research director at IHS Markit, on p.25 David takes a close look at the power of the franchise movie

Editor of Celluloid Junkie, on p.30, Patrick wonders whether cinema and Netflix will ever learn to play nicely.