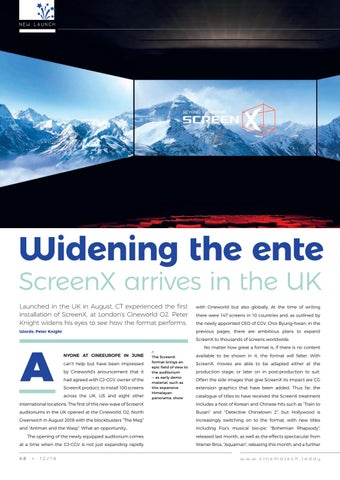 ScreenX arrives in the UK Launched in the UK in August, CT experienced the first installation of ScreenX, at London’s Cineworld O2. Peter Knight widens his eyes to see how the format performs,

with Cineworld but also globally. At the time of writing

previous pages, there are ambitious plans to expand

there were 147 screens in 10 countries and, as outlined by the newly appointed CEO of CGV, Choi Byung-hwan, in the ScreenX to thousands of screens worldwide. No matter how great a format is, if there is no content

NYONE AT CINEEUROPE IN JUNE can’t help but have been impressed by Cineworld’s anouncement that it had agreed with CJ-CGV, owner of the ScreenX product, to install 100 screens across the UK, US and eight other

The ScreenX format brings an epic field of view to the auditorium — as early demo material, such as this expansive Himalayan panorama, show

available to be shown in it, the format will falter. With ScreenX, movies are able to be adapted either at the production stage, or later on in post-production to suit. Often the side images that give ScreenX its impact are CG extension graphics that have been added. Thus far, the catalogue of titles to have received the ScreenX treatment

international locations. The first of this new wave of ScreenX

auditoriums in the UK opened at the Cineworld, O2, North

Busan” and “Detective Chinatown 2”, but Hollywood is

Greenwich in August 2018 with the blockbusters “The Meg”

increasingly switching on to the format, with new titles

and “Antman and the Wasp”. What an opportunity…

The opening of the newly equipped auditorium comes

released last month, as well as the effects spectacular from

Warner Bros, “Aquaman”, releasing this month, and a further