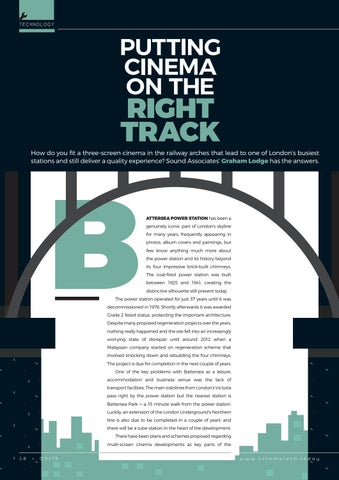 PUTTING CINEMA ON THE

How do you fit a three-screen cinema in the railway arches that lead to one of London’s busiest stations and still deliver a quality experience? Sound Associates’ Graham Lodge has the answers.

ATTERSEA POWER STATION has been a genuinely iconic part of London’s skyline for many years, frequently appearing in photos, album covers and paintings, but few know anything much more about the power station and its history beyond its four impressive brick-built chimneys. The coal-fired power station was built between 1925 and 1941, creating the distinctive silhouette still present today. The power station operated for just 37 years until it was decommissioned in 1978. Shortly afterwards it was awarded Grade 2 listed status, protecting the important architecture. Despite many proposed regeneration projects over the years, nothing really happened and the site fell into an increasingly worrying state of disrepair until around 2012 when a Malaysian company started on regeneration scheme that involved knocking down and rebuilding the four chimneys. The project is due for completion in the next couple of years. One of the key problems with Battersea as a leisure, accommodation and business venue was the lack of transport facilities. The main trainlines from London’s Victoria pass right by the power station but the nearest station is Battersea Park — a 15 minute walk from the power station. Luckily, an extension of the London Underground’s Northern line is also due to be completed in a couple of years’ and there will be a tube station in the heart of the development. There have been plans and schemes proposed regarding multi-screen cinema developments as key parts of the 3 8