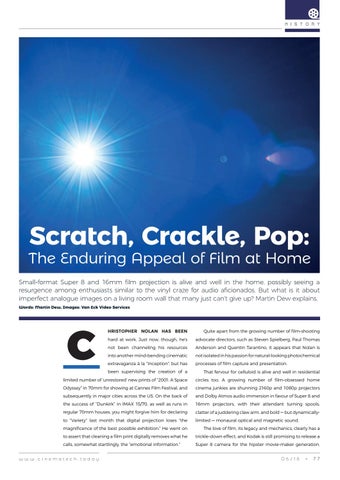 The Enduring Appeal of Film at Home Small-format Super 8 and 16mm film projection is alive and well in the home, possibly seeing a resurgence among enthusiasts similar to the vinyl craze for audio aficionados. But what is it about imperfect analogue images on a living room wall that many just can’t give up? Martin Dew explains. Words: Martin Dew, Images: Van Eck Video Services

Quite apart from the growing number of film-shooting

not been channeling his resources

Anderson and Quentin Tarantino, it appears that Nolan is

into another mind-bending cinematic

not isolated in his passion for natural-looking photochemical

extravaganza à la “Inception”, but has

processes of film capture and presentation.

been supervising the creation of a

That fervour for celluloid is alive and well in residential

limited number of ‘unrestored’ new prints of “2001: A Space

circles too. A growing number of film-obsessed home

Odyssey” in 70mm for showing at Cannes Film Festival, and

subsequently in major cities across the US. On the back of

and Dolby Atmos audio immersion in favour of Super 8 and

regular 70mm houses, you might forgive him for declaring

clatter of a juddering claw arm, and bold — but dynamically-

to “Variety” last month that digital projection loses “the

magnificence of the best possible exhibition.” He went on

The love of film, its legacy and mechanics, clearly has a

to assert that cleaning a film print digitally removes what he

trickle-down effect, and Kodak is still promising to release a

HRISTOPHER NOLAN HAS BEEN