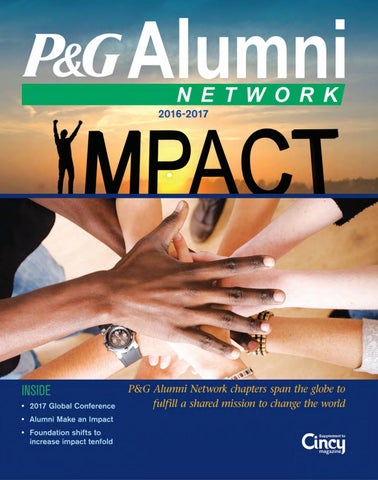 two requests I hear most often are, ‘what do I need to do to succeed after Procter and Gamble, what skills do I need?’ and, second, ‘how do I get plugged into this tech startup scene?’ which is just growing really rapidly, and I think is the future of job growth in this country. “It’s generated a lot of excitement,” he added. “We have sold out every event this year, so we’re going to have to start finding bigger rooms, which is a nice problem to have.” Even with the change, the chapter’s main mission still hinges on relationship building and networking. Bryan Brown, chapter board member, said the group does a great job balancing fun, social time – hosting events in cool places around town – with relevant content. People who come to Alumni Network events like to share their ideas about business and professional growth. “This past year I enjoyed connecting with former colleagues who are making things happen at emerging tech startups,” Brown said. “It’s always fun to share sto-

ries and compare notes on new challenges and opportunities at small, entrepreneurial firms today.” While the Cincinnati chapter has yet to formally mark its plans for 2017 – that will happen this fall – it’s likely the tech theme will continue in some form or fashion. The city has risen in the ranks and is now considered one of the nation’s Gina Drosos, CEO of Assurex Health, speaks at premier hubs for such the Cincinnati Alumni Network chapter meeting ventures. In addition in June. to the aforementioned Queen City Angels, Cincinnati now houses really no place to hang out and meet other the likes of Cintrifuse, which seeks to help tech founders, and there wasn’t a large high-potential startups grow (and of which volume of serial entrepreneurs to mentor P&G is a partner), and CincyTech, a seed- other folks,” Schaefer said. stage investor, among other accelerators “The whole thing is snowballing now,” and incubators. he added. “And I don’t think it’s a bubble, “When I left P&G, there was limited I think this is the very early start of a curve access to seed-fund investors, there was that’s going to go straight up.” n