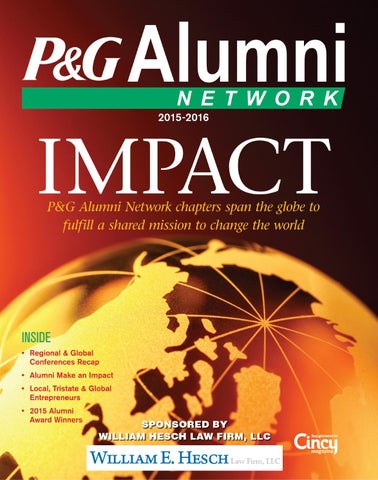 A Personal Connection By Julie Bethlenfalvy

key component of what makes a P&G alum tick is philanthropy. And because it’s personal, three alumni are involved with nonprofit organizations in different parts of the world.

HEARAID FOUNDATION About 15 years ago, Procter & Gamble alumna Adriana Lynch’s father, Oleno Pozzani, completely lost his hearing at age 69. He was diagnosed with Meniere’s disease, a disorder of the inner ear that causes random episodes of vertigo and deafness in one ear. Then, a benign brain tumor pressed against his right ear’s auditory nerve, causing him to lose his hearing in the other ear. It devastated him and his family. “He was so full of life,” says Lynch, a native Brazilian who now lives in Scottsdale, Ariz. “All of a sudden that light went out. He withdrew completely and for all purposes, he disappeared.” Pozzani came to the United States and saw Dr. Jack Shohet, University of Cincin-

nati alum who has a practice in Southern California. In 2009, Shohet founded the HearAid Foundation, a nonprofit that provides hearing aids to those who can’t afford them. Hearing aids aren’t covered by Medicare and most insurance companies; hearing aids can cost between $3,000-$5,000 a pair. Many states provide assistance but the hurdles to qualifying for those programs are significant, says Lynch. “That’s where HearAid comes in. We help the people that fall through the cracks,” she adds. “When Dr. Shohet asked me to join as a board member, I knew I had found my calling. [Shohet] gave my dad the gift of hearing again.” Although she was only with P&G Brazil for two years, it fostered her innate passion for giving back. “If you want to volunteer, they give you the freedom to do it,” says Lynch, current president and CEO of Pozzani & Associates, which was named after her father. Worldwide, 316 million people have reported hearing loss and 32 million are children. For older adults, hearing loss is isolating and can cause depression, and for kids it affects their learning and socialization abilities. HearAid is still fairly new, raising roughly $150,000 annually, and growing. “We need money to buy the devices. It’s zero cost out of pocket for recipients. We have a long way to go,” she adds.

A young recipient of a free hearing aid thanks to the HearAid Foundation.

“Play tennis and live longer” is Club 55’s motto. Founded in 1972, Club 55 is a tennis club that provides cultural, social and exercise activities for seniors in India. P&G alum Sitesh Dutt, honorary general secretary and vice president of Club 55, strongly believes in the sport’s benefits for the elderly and children. “You can play tennis at varying tempos

Club 55, a nonprofit in India, keeps seniors active. depending on your age and the physicalmental condition you are in. [It] helps them to keep fit,” Dutt says, who spent 17 days in a Mumbai hospital due to spinal fractures after he fell down at home after an encephalitis attack in October 2014. “The neurologist who I saw on a followup visit couldn’t believe that I had improved so rapidly. He said, ‘Must be due to your Tennis,’” he says. Dutt spent 13 years with P&G and is a U.S.-certified trainer in industrial hygiene and safety (IH&S), total quality management and environment. He was the first Asian IH&S coordinator for the Asia-Pacific region. “P&G and yours truly were made for each other,” he says, crediting his association with P&G as what helps him add value to his service with Club 55. “Tennis is a costly game, economically feasible only for a few in India,” says Dutt. As a teenager, he fell in love with tennis but couldn’t afford to buy the equipment. “[Club 55] distributes our old rackets and shoes to the ball boys, and I recently gave P&G Alumni 2015 -16

tennis carryalls to the under-12 winning girls at the Maharashtra State Lawn Tennis Association event.” Dutt is also passionate about encouraging young women to play tennis. “As future mothers they have an important role to play ... to improve their physical fitness and later to encourage their children to take to the game to keep their children healthy,” he says. For the club, Dutt started chess and bridge contests to keep the members connected during the tennis off-season, and also keeps the 100-plus members connected through a newsletter, which includes updates on tennis matches and events, and articles on how to be healthy despite the aging process.

P&G alumna Arlene Golembiewski returned to Rotifunk, the seat of the Bumpeh Chiefdom in Sierra Leone, in 2011. It had been 35 years since she served there as a

secondary school science teacher for the Peace Corps from 1974-1976. “There’s nothing like the poverty in Sierra Leone. Nothing changed in 40 years,” says Golembiewski, who retired from P&G as associate director of Global Health Safety & Environment in 2008 after 30 years. Prior to her visit, Sierra Leone had experienced an 11-year civil war. Rotifunk, a town of 8,000, had been abandoned to rebel control and burned to the ground. Affected by the aftermath, Golembiewski created a girls’ scholarship fund to help girls attend secondary school and then, in 2013, founded the Sherbro Foundation, which has supported more than 200 girls to attend four high schools in Bumpeh. “Most teenagers have no means to go to school and illiteracy rates remain at 70 percent,” says Golembiewski, adding that many families only scrape by on $1 per day. The Sherbro Foundation also helped the chiefdom create a tree-planting program that grows income-producing fruit, includ-

ing orange, grapefruit, mango, oil palm, coconut and more. It started in 2014 with one nursery and 18,000 tree seedlings and now has two nurseries with 40,000 tree seedlings. But in mid-2014, the Ebola crisis hit Sierra Leone and Bumpeh Chiefdom. “It was frightening. The country was totally unprepared,” says Golembiewski. “People didn’t understand how it was transmitted, how they could protect themselves.” The Sherbro Foundation funded 300 hand-washing stations all over the chiefdom, and the chiefdom leadership sent out its own health education message, provided its own border control and changed high-risk behaviors like burial practices. These actions kept the virus out of Bumpeh. But Ebola isn’t over, says Golembiewski. “It has devastated Sierra Leone’s economy. Everybody is a victim,” she says. But women, specifically, were hit the

hardest by the outbreak, and helping them was a priority for the chiefdom. “They are the majority of caregivers. A lot of them are single heads of households, taking care of their children and other children,” adds Golembiewski. In response, the Sherbro Foundation started the Women’s Vegetable Project with help from the locals. Similar to the treeplanting program, the program provides the women seeds and fertilizer to raise fast-growing crops. The seeds were planted in April 2015 and, as of August, crops are already being harvested. “This is what we aim to do—run projects that directly benefit the people who need them within months of starting, not years,” says Golembiewski. The Sherbro Foundation also helped create an adult literacy program and secured 50 computers for a community computer center, and re-started its Newborn Baby Project that had been put on hold during the Ebola crisis. n

Mental Health, Addiction and Senior Treatment We accept Medicare, Tricare and most commercial insurance. Now in network with Anthem

Welcome to the annual P&G Alumni Network's 2015-2016 publication. In this year's publication, read stories about how P&G alum and alumni cha...

Welcome to the annual P&G Alumni Network's 2015-2016 publication. In this year's publication, read stories about how P&G alum and alumni cha...