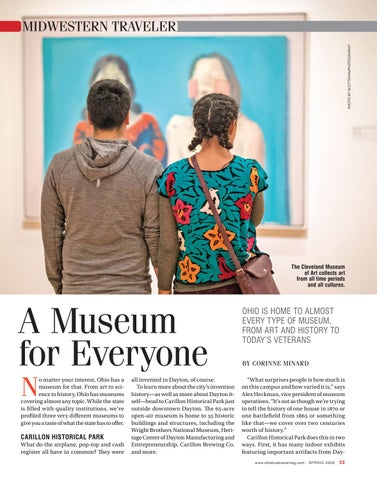 The Cleveland Museum of Art collects art from all time periods and all cultures.

A Museum for Everyone N

o matter your interest, Ohio has a museum for that. From art to science to history, Ohio has museums covering almost any topic. While the state is filled with quality institutions, we’ve profiled three very different museums to give you a taste of what the state has to offer.

Carillon Historical Park What do the airplane, pop-top and cash register all have in common? They were

all invented in Dayton, of course. To learn more about the city’s invention history—as well as more about Dayton itself—head to Carillon Historical Park just outside downtown Dayton. The 65-acre open-air museum is home to 35 historic buildings and structures, including the Wright Brothers National Museum, Heritage Center of Dayton Manufacturing and Entrepreneurship, Carillon Brewing Co. and more.

Ohio is home to almost every type of museum, from art and history to today’s veterans By Corinne Minard “What surprises people is how much is on this campus and how varied it is,” says Alex Heckman, vice president of museum operations. “It’s not as though we’re trying to tell the history of one house in 1870 or one battlefield from 1865 or something like that—we cover over two centuries worth of history.” Carillon Historical Park does this in two ways. First, it has many indoor exhibits featuring important artifacts from Dayw w w.ohiobusinessmag.com . s p r i n g 2 0 2 0

ton’s history. The Wright Brothers National Museum, for example, has more Wright brothers’ artifacts on display than any other museum in the world. Included in these artifacts is the Wright Flyer III, “which is considered the most original, consisting of the most original parts of any existing Wright brothers’ airplane and it’s the airplane that Orville Wright considered the world’s first practical airplane,” says Heckman. Other indoor exhibits and attractions include almost 200 National Cash Register registers, a hand-carved carousel that is Dayton themed, a Conestoga wagon, the oldest existing American-built locomotive and more. Carillon Historical Park also explores the region’s history through interpreters and demonstrations in the open-air part of the park, which includes the Early Settlement Area and The Print Shop. At the William Morris House, visitors can learn how to dip candles or churn butter with the same types of tools early settlers would have used. The Carillon Brewing Co. brews beers the same way Daytonians did in the 1850s. And the Print Shop features the country’s only fully operational 1930s letterpress job shop. “They’re using the methods and the materials and the processes from the 1930s and 54

that’s very eye-opening for folks,” says Heckman. “[In] the print shop you see printing equipment that can only handle one color of ink at a time and if you want to have a printed product that has four or five different colors on it that means you’re handling the paper four or fives times and cleaning up the printing press four or five times.” While touring the park, make sure to take in the 151-foot-tall Deeds Carillon as well. Built between 1940 and 1942, the carillon features 57 bells and is the largest carillon instrument in the state of Ohio. “It’s not just a big stone monument, it’s a living, breathing memorial to the Deeds family,” says Heckman of the carillon honoring the couple that created the park.

Instead of displaying artifacts such as helicopters and tanks, the museum looks to honor veterans by telling their stories. Visitors follow the stories of veterans through 14 thematic alcoves. “[They] take you through the common steps a veteran takes from taking the oath of office and leaving home, basic training, deployment, combat experiences, coming home and then, equally important, post-service, how they continue to contribute to their community and the country as a whole,” says Hoffman. “There are 25 veterans who were selected who provide the narration through these alcoves and they represent all different conflicts, World War II forward, and then also people who did service at peacetime. [They’re] from all parts of the country and it’s their narrative that takes you through the museum,” adds Hoffman. Through multimedia presentations, interactive pieces and artifacts, visitors are able to learn about all facets of the veteran experience. The museum also invites visitors to discuss their own experiences with a Share Your Story booth. In addition the museum is looking to engage the community with its many events and programs. “We serve an important role as rally point and advocate for all veterans and continue to develop relevant programming to meet their needs as well

as engage all Americans, and young people in particular, about the importance of doing something bigger than yourself,” says President and CEO Lt. General Michael Ferriter, who retired from the U.S. Army. These programs include Veteran Voices, which are panels that have previously featured veterans of D-Day and the Battle of Mogadishu; special Memorial Day and Veteran’s Day programs; community celebrations; and Rally Point, a free breakfast and informal event that connects veterans to resources. Ultimately, the museum hopes to honor, connect, inspire and educate. “I think that being able to come through and hear the stories of veterans it demonstrates the power of people coming together for the good of our nation and I think it’s a reminder also that there’s so much more that binds Americans than divides us and that’s a timely message now,” says Hoffman.

Cleveland Museum of Art The 103-year-old Cleveland Museum of Art is also looking to inspire its visitors. “We are an encyclopedic museum, meaning that we collect art from all time periods and all cultures, from the beginning of when art was produced in this world to the art of today. We like to think and hope that we have something for everyone. We have

a wonderful permanent collection, the art that we have collected over our 103 years, and we also always have special exhibitions going on at any given time,” says Heather Lemonedes Brown, the museum’s chief curator and deputy director. The museum is home to many collections, from classic European art—such as the impressionists—to ancient art from the Bronze Age to modern, contemporary pieces. Brown recommends picking a gallery that aligns most with your interests, but there are several special pieces that are unique to the museum. For example, Stargazer is an abstract sculpture of a women looking up at the stars that dates back to 3,000 B.C. “It’s one of the oldest sculptures of the human figure in the museum,” says Brown. Another special piece is one of Claude Monet’s water lilies paintings that is featured in its impressionist room. “Water lilies are a product of his fascination with the shimmering surface of the pond and you see both the plants growing in the pond and you see the clouds overhead reflected in the surface of the pond. It’s as if the water, sky and land all come together in this one picture,” says Brown. And in the American collection, Brown recommends visitors make a point to see “Stag at Sharkey’s” by George Bellows. “It

The National Veterans Memorial and Museum offers multimedia presentations and interactive pieces and artifacts to teach visitors about all facets of the veteran experience.

depicts a fight at Sharkey’s Athletic Club in New York City and what the artist does is he depicts the drama and energy of the struggle between the two boxers by blurring the scene’s details with rapid and very gestural brushwork. So the subject and the style merge together here,” adds Brown. Visitors in 2020 can also expect to see several temporary exhibitions at the Cleveland Museum of Art. “Proof: Photography in the Era of the Contact Sheet” is a Cleveland Museum of Art exclusive that will be open to the public from Feb. 7 to April 12. The exhibition features 150 contact, or proof, sheets that photographers used to select images in the era before digital photography. The collection features images of Marilyn Monroe, the Beatles and other celebrities. “Typically the contact sheet remained only a part of the working process and not in public view. So this exhibition will kind of pull back the curtain on the [process] of a lot of photographers who were working in the second half of the 20th century,” says Brown. w w w.ohiobusinessmag.com . s p r i n g 2 0 2 0

MIDWESTERN TRAVELER And in May, the exhibition “Picasso and Paper” will make its only U.S. stop at the museum. The exhibition features nearly 300 works by Pablo Picasso that showcase the many ways he used paper—“The way that he used prints and drawing but also the way that he used paper in collages, the way that he made sculpture out of the pieces of torn and even burned paper. We’ll see manipulated photographs on paper. And then we’ll also see the way he worked on paper to prepare himself for major paintings and sculpture,” adds Brown. One of the featured pieces of the exhibition is “Women at Their Toilette,” a more than 14-foot long collage created from pieces of wallpaper. With the museum’s wide collection, Brown is confident visitors can fi nd whatever experience they desire. “You can fi nd what you’re looking for here, whether it’s quiet contemplation, relaxation—it’s a great place to come with family or friends. It can spark conversation. It can spark your own creativity. I think it can inspire you, but it’s everything from relaxing to energizing, just depending on what you’re in the mood for,” she says. ■

RIGHT: The Cleveland Art Museum offers several programs for children and families to explore their inner artist. BELOW: The Cleveland Museum of Art is home to many famous pieces of art, including one of Claude Monet’s water lilies paintings.

Baseball fans are raving about our amazing behind-the-scenes extravaganza! It’s an exclusive hands-on tour customized to cover your favorite teams and players. Go inside our hallowed Bat Vault, see archival treasures, and round for home with your own personalized bat.

Midwestern Traveler: A Museum for Everyone

Midwestern Traveler: A Museum for Everyone