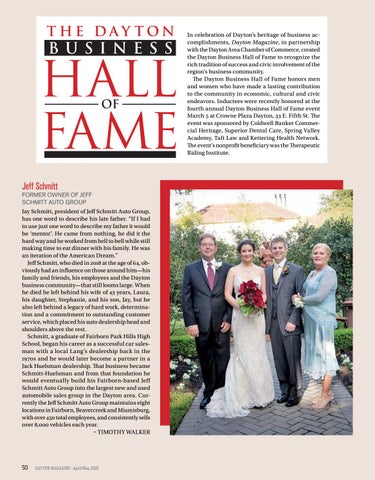 In celebration of Dayton’s heritage of business accomplishments, Dayton Magazine, in partnership with the Dayton Area Chamber of Commerce, created the Dayton Business Hall of Fame to recognize the rich tradition of success and civic involvement of the region’s business community. The Dayton Business Hall of Fame honors men and women who have made a lasting contribution to the community in economic, cultural and civic endeavors. Inductees were recently honored at the fourth annual Dayton Business Hall of Fame event March 5 at Crowne Plaza Dayton, 33 E. Fifth St. The event was sponsored by Coldwell Banker Commercial Heritage, Superior Dental Care, Spring Valley Academy, Taft Law and Kettering Health Network. The event’s nonprofit beneficiary was the Therapeutic Riding Institute.

Former owner of Jeff Schmitt Auto Group Jay Schmitt, president of Jeff Schmitt Auto Group, has one word to describe his late father. “If I had to use just one word to describe my father it would be ‘mentor’. He came from nothing, he did it the hard way and he worked from bell to bell while still making time to eat dinner with his family. He was an iteration of the American Dream.” Jeff Schmitt, who died in 2018 at the age of 64, obviously had an influence on those around him—his family and friends, his employees and the Dayton business community—that still looms large. When he died he left behind his wife of 43 years, Laura, his daughter, Stephanie, and his son, Jay, but he also left behind a legacy of hard work, determination and a commitment to outstanding customer service, which placed his auto dealership head and shoulders above the rest. Schmitt, a graduate of Fairborn Park Hills High School, began his career as a successful car salesman with a local Lang’s dealership back in the 1970s and he would later become a partner in a Jack Huelsman dealership. That business became Schmitt-Huelsman and from that foundation he would eventually build his Fairborn-based Jeff Schmitt Auto Group into the largest new and used automobile sales group in the Dayton area. Currently the Jeff Schmitt Auto Group maintains eight locations in Fairborn, Beavercreek and Miamisburg, with over 450 total employees, and consistently sells over 8,000 vehicles each year. – Timothy Walker

Partner at Taft, Stettinius, and Hollister LLP Attorney Fred A. Ungerman says he never expected to settle in Dayton, the city he has now called home for over 40 years. “I grew up in a suburb of Philadelphia,” says Ungerman, partner-in-charge at the law firm of Taft, Stettinius and Hollister LLP. “And when I took the job here I really thought I’d come here for a few years and then go back to the East Coast. I come from a relatively big family with three sisters and I thought I’d be in a different place for awhile.” Before moving to Ohio Ungerman received his undergraduate degree, graduating magna cum laude, from Grove City College and his law degree from Duke University School of Law. Once employed here, however, he quickly became involved in a community he found to be refreshingly open and friendly. “It’s hard to communicate this—the community is just so welcoming,” he says. “Within a year I became involved with the YMCA finance committee, with Chaminade-Julienne, with the Victoria Theatre and Far Hills Presbyterian Church. Very quickly I found myself so involved in the community that I really believe I would have lost something if I’d left.” Continuing with that spirit, Ungerman now also serves as a member of the executive board of the American Heart Association and a member of the Miami Valley development committee of Goodwill Easter Seals. Professionally, Ungerman has spent his 40-year career as an attorney concentrating his practice on representing public and private sector employers in labor and on handling construction and employment disputes including Ohio and federal prevailing wage claims. He also specializes in union representation and unfair labor practice claims, collective bargaining, labor arbitration, employment discrimination, wage and hour issues and employee leave-of-absence matters. – Timothy Walker

Congratulations to Fred Ungerman on being named a 2020 inductee to the Dayton Business Hall of Fame.

owner of A. Moore consulting and board chair of Premier Health Even though the majority of her 20 years and counting as a Dayton-area resident occurred after she retired from The Berry Company in 2008 Anita Moore has become a visible and committed community leader. Balancing her time so that she can enjoy her retirement and contribute during it is something in which Moore strongly believes. “I really think it is intended that we would be useful all the days of our lives,” she says, “and that we would be able to engage in meaningful ways and to contribute in meaningful ways.” Moore’s experience as a human resources professional has shone through the ways she has connected organizations and the Dayton community. Right before she left The Berry Company Moore was

approached to join the board of the Miami Valley Hospital, which would lead to her being elected to chair Premier Health’s board of trustees in 2016. In those roles she has been an important liaison between hospital leadership and the residents it serves. Beyond the corporate world, Moore’s passion for supporting Dayton’s future has been exemplified through her involvement with The Dayton Foundation and her role as chair of the Montgomery County Workforce Investment Board, which she will hold through June of this year. Moore continues to work and mentor others in service of supporting Dayton’s future, even 12 years into her retirement. All of this serves another mantra that guides Moore through her work and days—that people should “plant trees in whose shade they know they will never sit.” – Kevin Michell

Your health is more than how you feel physically. It’s your body, your mind, your spirit— all of you. At Kettering Health Network, our primary care providers, specialists, caregivers, and Spiritual Services teams work together to provide team-based care rooted in kindness and compassion.

We combine state-of-the-art treatments and technology with our faith-based heritage because we believe that in order to heal, you need care for the whole person.

Former CEO of Kettering Health Network Frank Perez arrived in the United States in 1962, coming from Cuba to join his mother and sisters who had arrived stateside a year earlier. As the head of his household at just 18 years old he worked hard to support his family while carving out a career path in his new home country. He’s maintained that ethos ever since— notably leading the Kettering Health Network for 17 years from 1994 to 2011— and into retirement. Perez has used his time to channel the passion he got from his mother into meaningful projects that make a difference in the lives of others. He chairs the board of Spring Valley Academy—a role he’s held for just over a decade— and serves as executive director of Good Neighbor House, a nonprofit that supports the underserved of the Dayton community through accessible food, clothing and medical care. “Dayton’s strong, Dayton’s resilient and we care for one another here,” says Perez. “And that resonates with me.” As he continues to give back to his adopted home of Dayton, Perez maintains a gratitude for the country that took him in and provided opportunities to make a difference, as well as the figures who have shaped his journey along the way. He mentions how lucky he feels to have built a relationship with Virginia Kettering. Her love, passion and commitment to the community rubbed off on him, instilling in him his own devotion to Dayton. Looking back on both what Dayton has given him and what he’s been able to give to the community, Perez feels a real sense of fulfillment. “It’s a real satisfaction,” he says, “to be part of something that is bigger than yourself. I’m a happy person.” – Kevin Michell