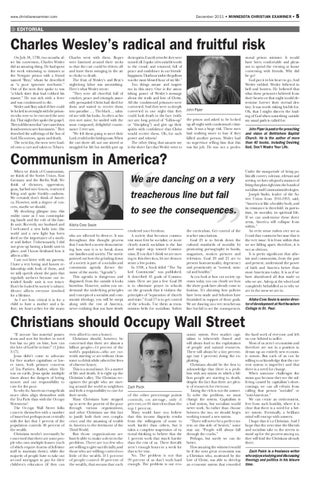 Charles Wesley’s radical and fruitful risk On July 18, 1738, two months after his conversion, Charles Wesley did an amazing thing. He had spent the week witnessing to inmates at the Newgate prison with a friend named “Bray,” whom he described as “a poor ignorant mechanic.” One of the men they spoke to was “a black slave that had robbed his master.” He was sick with a fever and was condemned to die. Wesley and Bray asked if they could be locked in overnight with the prisoners who were to be executed the next day. That night they spoke the gospel. They told the men that “one came down from heaven to save lost sinners.” They described the sufferings of the Son of God, His sorrows, agony and death. The next day, the men were loaded onto a cart and taken to Tyburn.

Charles went with them. Ropes were fastened around their necks so that the cart could be driven off and leave them swinging in the air to choke to death. The fruit of Wesley’s and Bray’s night-long labor was astonishing. Here’s what Wesley wrote: “They were all cheerful; full of comfort, peace and triumph; assuredly persuaded Christ had died for them and waited to receive them into paradise …. The black … saluted me with his looks. As often as his eyes met mine, he smiled with the most composed, delightful countenance I ever saw. “We left them going to meet their Lord, ready for the bridegroom. When the cart drove off, not one stirred or struggled for life but meekly gave up

their spirits. Exactly at twelve they were turned off. I spoke a few suitable words to the crowd; and returned, full of peace and confidence in our friends’ happiness. That hour under the gallows was the most blessed hour of my life.” Two things amaze and inspire me in this story. One is the astonishing power of Wesley’s message about the truth and love of Christ. All the condemned prisoners were converted. And they were so deeply converted in one night that they could look death in the face (without any long period of “follow-up” or “discipling”) and give up their spirits with confidence that Christ would receive them. Oh, for such power and witness! The other thing that amazes me is the sheer fact that Wesley went to

John Piper the prison and asked to be locked up all night with condemned criminals. It was a huge risk. These men had nothing more to lose if they killed another person. Wesley had no supervisor telling him that this was his job. He was not a profes-

sional prison minister. It would have been comfortable and pleasant to spend the evening at home conversing with friends. Why did he go? God put it in his heart to go. And Wesley yielded. Wesley believed in hell and heaven. He believed that what these prisoners believed from their hearts on that night would determine forever their eternal destiny. It was worth risking his life for. Oh, that I might discern the leading of God when something outside my usual path is called for. John Piper is pastor for preaching and vision at Bethlehem Baptist Church. He is the author of more than 40 books, including Desiring God, Don’t Waste Your Life.

Communism in America? When we think of Communism, we think of the Soviet Union, East Germany and the Berlin Wall. We think of dictators, oppression, guns, barbed wire fences, restricted living and quite frankly—sadness. We certainly don’t think of America. However, with a degree of concern, maybe we should. My shocking glimpse into this reality came as I was contemplating family and the role of the family unit. Recently, my husband and I welcomed a new baby into this world and a new light has been shed on the importance of a mother and father. Unfortunately, I did not grow up having a family unit in place, and I know firsthand how it affects a life. I am not bitter with my parents; I have a very loving and honest relationship with both of them, and we talk openly about the pain that regularly surfaces because our intended family unit is not intact. Don’t be fooled by society’s culture; divorce affects everyone involved for a lifetime. As I see how critical it is for a child to have a mother and a father, my heart aches for the many

We are dancing on a very treacherous line but fail to see the consequences. Alisha Cora Soule who are affected by divorce. It was throughout this thought process that I watched a movie demonstrating how easy it is to break down our families and society. The movie pointed out how the grinding down of a society is part of a socialist and communist agenda (hence the name of the movie, “Agenda”). This agenda is dangerous and disguised; from the outside it looks harmless. However, unless you understand the underlying principles and concepts of a socialist and communist ideology, you will be swept along with the rest of America, never realizing that you have slowly

rendered your freedom. A society that becomes communist must first be socialist; or more clearly stated, socialism is the last and major step toward Communism. If you don’t think we are moving in this direction, let me demonstrate a few points. In 1958, a book titled “The Naked Communist” was published. It described 45 goals of Communism. Here are just a few: Goal 28 is to eliminate prayer in schools on the grounds that it violates the principles of “separation of church and state.” Goal 17 is to get control of the schools. Use them as transmission belts for socialism. Soften

the curriculum. Get control of the teacher associations. Goal 25 is to break down the cultural standards of morality by promoting pornography in books, magazines, motion pictures and television. Goal 20 and 21 are to present homosexuality, degeneracy and promiscuity as “normal, natural and healthy.” As you look at how our society operates today, you can clearly see how the above goals have already come to fruition. It’s alarming how policies have been made and behaviors have flourished in support of these goals. We are dancing on a very treacherous line but fail to see the consequences.

Under the masquerade of being politically correct, tolerant, relevant and serving, we have adopted a manner of living that plays right into the hands of socialism and Communism ideologies. Joseph Stalin, leader of the Soviet Union from 1941-1953, said, “America is like a healthy body, and its resistance is threefold: its patriotism, its morality, its spiritual life. If we can undermine these three areas, America will collapse from within.” An eerie sense rushes over me as I read that comment because that is the very issue: It is from within that we are falling apart; therefore, it is not as obvious. It is pretty significant that atheists and communists, from the past and present, understand the power of faith and America better than most Americans today. It is as if we have abandoned all that made us who we are. Asleep at the wheel and completely befuddled as to why we are in the mess we are in. Alisha Cora Soule is senior director of development at Northwestern College in St. Paul.

Christians should Occupy Wall Street “If anyone has material possessions and sees his brother in need but has no pity on him, how can the love of God be in him?” (1 John 3:17). Jesus didn’t come to advocate for free market capitalism or lower taxes, both primary concerns of Tea Partiers. Rather, when He was on earth, Jesus spoke multiple times about the dangers of loving money and our responsibility to care for the poor. So why do American evangelicals more often align themselves with the Tea Party than with the Occupy Movement? The Occupy Wall Street folks concern themselves with a number of issues but perhaps most centrally with the fact that 1 percent of the population controls 40 percent of the wealth. Christians needn’t necessarily be concerned that there are some people who own multiple homes (each of which require dozens of full-time staff to maintain them), while the majority of people have to take out second mortgages to pay for their children’s education (if they can

even afford to own a home). Christians should, however, be concerned that there are almost a billion people—14 percent of the world’s population—who are currently starving or are without clean water to drink while others live lives of obscene luxury. This is a moral issue. It’s a matter of life and death. It is right up the Christian’s alley. The Christian recognizes the people who are starving around the world as neighbors and feels a responsibility to care for their needs. Many Christians have stepped up to serve the poorest of the poor through various organizations, and other Christians use this fact to justify both their own complacency and the amassing of wealth in America to the detriment of the Third World. But those organizations are barely able to make a dent in the problem. There are too few who are willing to give sacrificially, and those who are willing control too little of the wealth. If 1 percent of people control 40 percent of the wealth, that means that each

Zach Psick of the other percentage points controls, on average, only .6 percent, or 66 times less than the top 1 percent. Many would have you believe that this income disparity results from the willingness of some to work harder than others, but it takes a complete suspension of rational thinking to believe that the 1 percent work that much harder than the rest of us. There literally aren’t enough hours in a week for that to be true. No. The problem is not that 99 percent of us don’t work hard enough. The problem is our eco-

nomic system. Free market capitalism is inherently flawed and will always lead to the exploitation of people and natural resources. There will always be a tiny percentage (say 1 percent) doing the exploiting. Christians should be the first to acknowledge that there is a problem with any system in which a billion people are starving to death, despite the fact that there are plenty of resources for everyone. Taxing the rich is not the answer. To solve the problem, we must change the system. Capitalism is a bad system, but socialism would never work. So rather than choose between the two, we should begin working toward a new system. “There will never be a perfect system on this side of heaven,” some may say. “People will always fall through the cracks.” Perhaps, but surely we can do better. How amazing the witness it would be if the next great economist was a Christian who, motivated by the love of Christ, was able to develop an economic system that rewarded

the hard work of everyone and left no one behind to suffer. Most of us aren’t economists and therefore are not in a position to dream up an entirely new economic system. But each of us can be willing to acknowledge that the current system is imperfect and that there is a need for change. When someone challenges the status quo because they see the suffering caused by capitalism’s shortcomings, we can all refrain from calling that person “socialist” or “anti-American.” We can create an environment, free from such hostility, where it is clear that there is a need for a better system. Eventually, a brilliant mind will emerge with answers. I hope that it’s a Christian. And I hope that the next time the liberals and socialists take to the streets to stand up for the poorest among us, they will find the Christians already there. Zach Psick is a freelance writer who enjoys studying and discussing theology and politics in his leisure time. 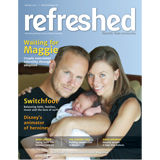