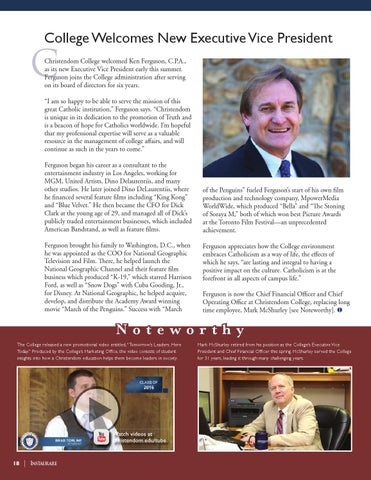 Christendom College welcomed Ken Ferguson, C.P.A., as its new Executive Vice President early this summer. Ferguson joins the College administration after serving on its board of directors for six years. “I am so happy to be able to serve the mission of this great Catholic institution,” Ferguson says. “Christendom is unique in its dedication to the promotion of Truth and is a beacon of hope for Catholics worldwide. I’m hopeful that my professional expertise will serve as a valuable resource in the management of college affairs, and will continue as such in the years to come.” Ferguson began his career as a consultant to the entertainment industry in Los Angeles, working for MGM, United Artists, Dino Delaurentiis, and many other studios. He later joined Dino DeLaurentiis, where he financed several feature films including “King Kong” and “Blue Velvet.” He then became the CFO for Dick Clark at the young age of 29, and managed all of Dick’s publicly traded entertainment businesses, which included American Bandstand, as well as feature films. Ferguson brought his family to Washington, D.C., when he was appointed as the COO for National Geographic Television and Film. There, he helped launch the National Geographic Channel and their feature film business which produced “K-19,” which starred Harrison Ford, as well as “Snow Dogs” with Cuba Gooding, Jr., for Disney. At National Geographic, he helped acquire, develop, and distribute the Academy Award winning movie “March of the Penguins.” Success with “March

of the Penguins” fueled Ferguson’s start of his own film production and technology company, MpowerMedia WorldWide, which produced “Bella” and “The Stoning of Soraya M,” both of which won best Picture Awards at the Toronto Film Festival—an unprecedented achievement. Ferguson appreciates how the College environment embraces Catholicism as a way of life, the effects of which he says, “are lasting and integral to having a positive impact on the culture. Catholicism is at the forefront in all aspects of campus life.” Ferguson is now the Chief Financial Officer and Chief Operating Office at Christendom College, replacing long time employee, Mark McShurley [see Noteworthy].

Notewor thy The College released a new promotional video entitled, “Tomorrow’s Leaders. Here Today.” Produced by the College’s Marketing Office, the video consists of student insights into how a Christendom education helps them become leaders in society.

Mark McShurley retired from his position as the College’s Executive Vice President and Chief Financial Officer this spring. McShurley served the College for 31 years, leading it through many challenging years. 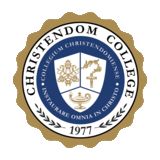