The Super-Secret Diary of Holly Hopkinson: This is going to be a fiasco - extract 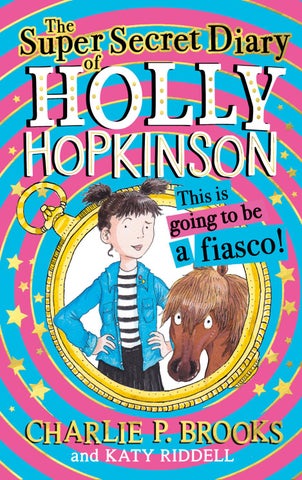 First published in Great Britain by HarperCollins Children’s Books in 2020 HarperCollins Children’s Books is a division of HarperCollinsPublishers Ltd, HarperCollins Publishers 1 London Bridge Street London SE1 9GF The HarperCollins website address is: www.harpercollins.co.uk 1 Text copyright © Charlie Brooks 2020 Illustrations copyright © Katie Riddell 2020 All rights reserved. HB ISBN 978-0-00-832808-5 PB ISBN 978-0-00-832811-5 Charlie Brooks and Katy Riddell assert the moral right to be identified as the author and illustrator of the work respectively. A CIP catalogue record for this title is available from the British Library. Printed and bound in Great Britain by CPI Group (UK) Ltd, Croydon, CR04YY Conditions of Sale This book is sold subject to the condition that it shall not, by way of trade or otherwise, be lent, re-sold, hired out or otherwise circulated without the publisher’s prior consent in any form, binding or cover other than that in which it is published and without a similar condition including this condition being imposed on the subsequent purchaser.

PROL O GUE OF THESE ARE THE LIVE MEMOIRS N. HOLLY HOPKINSON, WHO IS NEARLY TE

I am writing them by my own fair hand so that

historians and people from all over the world will have a real-life account of what life was like in ­twenty-first-century London without all the usual rubbish that adults put in.

Who knows how far in the future it will be before you get to read them, dear reader. I ima gine it could be hundreds – even squillions – of years before they are dug up,

publ ished to international bestselling a­ cclaim, set behind glass at the British Museum, studied in schools across the country

turned into a Hollywood movie . . .

My family, THE HOPKINSONS, live in a lovely, warm, clean, modern house, thank you very much. My dad has a job in an office. I have no idea what he does, but he always wears a suit. Mum works in PR. When I ask her what that is, she says it’s

‘TAKING MONEY OFF IDIOTS WHO HAVE NO IMAGINATION’. Harmony Hopk inson, my elder sister, is going through a difficult stage – well, that’s what I heard Mum saying to her teacher in her serious voice.

Harmony treats me like a little sister a bit too much. She needs to think more about how she’s going to look when these memoirs are published.

She’s only happy when she’s going off to demonstrate about something she disapproves of.

Harold Hopk inson is my older brother. He’s a bit stroppy and talks a load of codswallop. And he gets double-whopper spots on his nose these days. Dad says he was like Harold when he was younger, and Mum just says, ‘NOW, WHY DOESN’T THAT SURPRISE

But I really don’t know why Dad says he was like Harold, because he flipping well still is. We also have a dog called Barkley, who likes eating and going to the park.

He also thinks the poodle who we somet imes bump into is the bee’s knees. If he doesn’t tone down his stuff we’re going to get into serious trouble with the authorities.  DEMONSTRATE –

to shout and scre am like the dev il.

Finally, there’s Aunt Electra, who lives in Hackney and visits us all

‘THE GREATEST’ SAYS ME

Despite our fab house and the corner shop at the end of our cul-de-sac, which stocks everything we need, Mum wants to move to a different area. (Dad says she’s ‘upwardly mobile’. I think it’s caused by her

But we’ll see about that – the rest of our family are quite happy being immobile, thank you very much.

I quite like my school, in spite of the teachers . At least they don’t bother who are a much about homework, and if I sit at the back of the classroom, I can talk as much as I like to my best friend in the world, Aleeshaa.

And Aleeshaa always has loads of pocket money, so after PE we’ll gallivant across the park to the corner shop to buy stuff.

Once a week I’m allowed to go to Aleeshaa’s house for tea. They live in a very swish flat above her father’s art gallery up on Notting Hill. Dad’s always been a bit funny about Aleeshaa’s father since they met ‘ONE OF THOSE PAINFUL at what Mum calls PARENTS’ EVENINGS’.

‘Anyone would think he invented art,’ Dad said. ‘Excuse you, Dad,’ I said in my unforgiving voice. ‘Aleeshaa’s father knows a lot about art . . . and so does Aleeshaa . . . she’s going to art school, and she’s got a mobile phone.’

‘Fancy that,’ Dad replied, pulling one of his goofy faces to Mum. ‘But I can’t quite make the connection between—’

‘ENOUGH, GEORGE,’ said Mum. ‘And you would still have a phone, Hol ly, if you hadn’t dropped your old one dow n the loo.’

Anyway, Aleeshaa and I have an

UNBREA KABLE BOND, whatever my dad think s. She says I should go to art school with her, so I’m probably going to do that. Yes. All in all, my

great. Or so I thought.

OFF ICIA L BREAKI NG NEWS: IT ALL STARTED TO GO WRONG TODAY.

When I woke up this morning, I was very,

very happy. Probably even happier than

the queen; unless she had something special plan ned for breakfast.

Mum was flitting around the kitchen looking like a packet of vacuum-packed bacon. She was going to a dance class on her way to work. ‘Holly, your turn to take Barkley out,’ she shouted as her Lycra-clad bottom disappeared out of the door.  FLIT TING – flying and

sitting pretty much at the same time while eating toast.

The poodle doesn’t get up very early, so at least we wouldn’t have any bother on that front.

Dad left late for work, as usual. He says, ‘IT DOESN’T MATTER BECAUSE EVERYONE WHO WORKS IN MY OFFICE IS A MORON,’

when he is runn ing late – well, more like walking late, really. Harold was the least happy person in our family this morning. The neighbours complained (again!) to the coppers about his drumm ing, and now his drum kit is about to be the subject of a court order.

Wh ich will be a setback to his career as a plat inum-recordselli ng, stadium-fill ing

Harmony was being fine for her – she’s planning outside someone’s embassy on a social media, with some new friends who she’s never met. I tried to get some intel on what she’s up to, but she won’t tell me, as per usual. Harmony likes to support a lot of causes in her spare time – particularly when the weather’s nice.

School was quiet today, and then Aleeshaa and I went to ‘after-school coding camp’; which is secret code for eating sweet s and listen ing to music on Aleeshaa’s phone because the teacher didn’t turn up, as usual. When I got home, I could tell all was not The air was hanging heavy with the

wh iff of bad news. Dad was on his phone to Aunt Electra in one room.

I heard him say, ‘I’VE DECIDED TO GO

But Mum was on her phone in the kitchen to one of her book-club friends. She said, ‘He’s been fired . . . can’t say I’m surprised.’ But this is the weird bit. Mum then said, ‘OF COURSE WE’LL

What I can’t work out is how Dad going freelance means that Mum can finally make us all mobile upwards? IT JUST DOE SN’T MAKE SENSE.

WE ARE DOWNWARDLY – NOT UPWARDLY – MOBILE.

And we’re not just moving down a little bit;

if life is a game of Snakes and Ladders, we have just flipping well landed on a jumbo .

We are moving out to the countryside, to live on a farm with our grandpa near Chipping Topley.

TOMORROW. I rang Aleeshaa straight away to tell her the horrible news, and all she said was, ‘HEY . . . THAT’S RANDOM.’

But Mum made an expression like she’d sat on a very cold loo seat when he said that, so it will probably be for ages.

I pointed out to Dad that Dick Whitt ington didn’t bolt for the hills when he lost his job and went freelance. But Dad just said, ‘WELL,

DICK WHITTINGTON ONLY HAD A

So the Hopk inson family are being sentenced to a life of poverty, manure and people who speak funny – because of the price of CAT FOOD? LET HISTORY RECORD:

I, Holly Hopkinson, am NOT happy.

CHAP T ER 3 I WAS UP SPIT-SPOT BRIGHT AND EARLY TO TAKE BARKLEY OUT TO THE PARK FOR ONE LAST TIME. THE POOR, UNSUSPECTING BRUTE MIGHT NEVER SEE ONE AGAIN.

Then I popped round to Aleeshaa’s swish flat to

say goodbye – maybe forever? I asked her if she wanted to come and wave us off, but she said she had to help in her dad’s gallery today.

She seems to be getting over my bombshell DEPARTURE NEWS quite well; too well, in fact. I mean, it wouldn’t have hurt her to do a bit of desperate wailing, would it?

Any way, when I got home there was still masses of our junk to load up.

What was clear was that we were not going to get all of our stuff in the lorry. So Dad said he was making an ‘executive decision’ about what we had to leave behi nd. Harold’s drum kit made it on to the lorry, of course. But my Wendy house did not. I put up quite a stink, but Dad said I haven’t used it for years and . So I said, we all have to make

None of our neighbours came to wave us off – not even the ones who called the coppers about the drumming. And to make matters worse, when we drove off down the road, guess what crossed in front of the lorry? BAD LUCK

YES. A flipping BLACK than k you

Several hours later, we are a very demoralised bunch as we head ‘out into the sticks’, as Mum calls it. Dad says he’s felt better. Mum has certai nly looked better. And I am very nervous and DOWNCAST. Harmony has decided to wear BLACK for our pilgrimage.

Sulky Harold, of course, is the winner here. Even he can work out that he and his drum kit are w r i g g l i n g from the grasp of the by doing a sunlight flit.

So these could be the last words of Holly Hopk inson, if I disappear from the face of the Earth and my literar y legacy is tragically cut short. AU REVOIR, LONDON – UNTIL I RETURN AS

The Super-Secret Diary of Holly Hopkinson: This is going to be a fiasco - extract