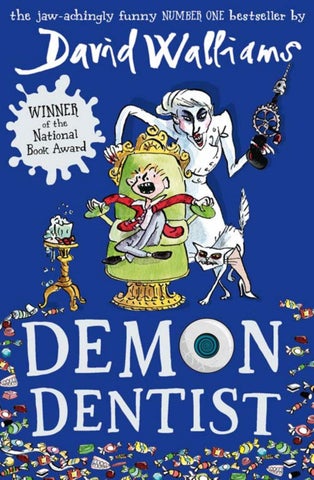 1 A Simple Case of Toothache

Alfie hated going to the dentist. As a result the boy’s teeth were almost all yellow. The ones that weren’t yellow were brown. They bore the stains of all the goodies that children love, but dentists hate. Sweets, fizzy drinks, chocolate. The teeth that were neither yellow nor brown simply weren’t there any more. They had fallen out. One had bitten into a toffee and stayed there. Assorted fruit-flavoured chews had claimed others. This is what young Alfie looked like when he smiled…

That’s because this twelve-year-old boy hadn’t gone to the dentist since he was very little. Alfie’s last visit was when he was around six. It was a simple case of toothache, but it ended in disaster. The dentist was an ancient man, Mr Erstwhile. Despite his good intentions, Mr Erstwhile should have retired many years before. The dentist looked like a tortoise, an old tortoise at that. He wore glasses so thick they made his eyes appear to be the size of tennis balls. Mr Erstwhile told Alfie the tooth in question was rotten, a filling wouldn’t save it and unfortunately he had no option but to take it out. The dentist yanked and yanked and yanked with his huge steel forceps. But the tooth wouldn’t come. Mr Erstwhile even rested his foot up on the chair by Alfie’s head to lever himself against it to help wrench the wretched 20

Just then the dentist had

ordered Miss Prig to fetch some particularly thick dental floss. He carefully tied the floss around the forceps, and then looped it around Miss

frame. The dentist then instructed his rotund receptionist

out of the window on the count of three. But even with all of Miss Veal’s immense weight yanking on the boy’s tooth, it still wouldn’t come. 22

With poor young Alfie still lying in terror on the dentistâ&#x20AC;&#x2122;s chair, Mr Erstwhile stepped into his waiting room to request reinforcements. The growing crowd of patients waiting to be seen were all called upon to assist. Young and old, fat and thin, the elderly dentist needed all the help he could get. Nevertheless, even with a lengthy human chain and an army of yankers*, the tooth stayed

well and truly put. By this time poor little Alfie was in great distress. The pain of having his tooth pulled out was a hundred times worse

than the toothache. However, Mr Erstwhile was determined to finish what he had started. Sweating profusely, the thirsty dentist took a large swig of mouthwash, and gripped on to the forceps as tightly as he could. Finally, after what seemed like days, weeks, even months of yanking, Alfie heard a deafening

The dentist had gripped so hard he had crushed the tooth. It exploded into thousands of tiny fragments inside Alfieâ&#x20AC;&#x2122;s mouth. With the ordeal finally over, Mr Erstwhile and all his helpers were lying in a tangled heap on the surgery floor.

“Well done, everyone!” he announced, as his assistant Miss Prig helped him to his feet. “Oh, that tooth was a stubborn little blighter!” Just then Alfie realised something. He still had toothache. The dentist had taken out the wrong tooth! Darkness had come to the town. Strange things were happening in the dead of night. Children would put a tooth under their pillow for the too...

Darkness had come to the town. Strange things were happening in the dead of night. Children would put a tooth under their pillow for the too...