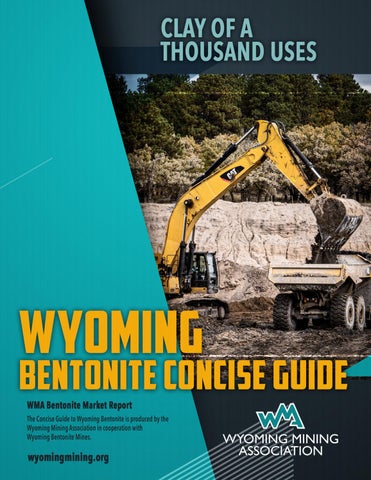 Wyoming Bentonite At A Glance

PRODUCTION 5.1 million+ tons of bentonite for various products PER YEAR!

6COMPANIES MINE MINING GENERATES TWO additional jobs in the local economy for every one mining job. $344 million to Wyoming’s economy with an average payroll, including benefits, of over $132 million.

The BENTONITE INDUSTRY contributed an estimated $10.3 million to state and local government in 2019.

concise guide to wyoming bentonite Bentonite is a wonder mineral, known as “Miracle Mud” and the “Clay of a Thousand Uses”. Bentonite has become an essential mineral for a myriad of engineering, industrial, manufacturing and environmental uses. The Concise Guide to Wyoming bentonite introduces you to this versatile mineral mined right here in Wyoming, and will illustrate how its production impacts our state’s economy.

due to its impermeable nature when wet, bentonite is used as a liner for landfills, retention ponds and dams. With the slow-down in the energy industry, cat litter manufacturers have become the dominant buyer of Wyoming bentonite. The unique properties of Wyoming’s sodium bentonite create the popular “clumping” action in your cat’s litter box!

Bentonite is a clay composed of hydrous silicate alumina primarily in the form of the mineral montmorillite. It has the unique property of being able to expand up to seven times its volume in water. This makes it a valuable ingredient where adhesion and thickening are required.

Bentonite is also an additive to animal feeds. Used as a binding agent in pelletized animal feed, particularly for fowl, it helps prevent lumping and caking. Some research has shown that bentonite may slow down the digestion so animals can better utilize the nutrition in feed.

Montmorillite is formed from altered volcanic ash. Millions of years ago, huge volcanic eruptions in the Pacific Northwest spread thick layers of ash in the shallow seas of what is now the northern plains. Over time, this ash became buried, and through decomposition, heat and pressure had its crystalline structure transformed into the clay mineral, montmorillite, the major constituent of bentonite.

The cosmetic and pharmaceutical industries value bentonite for its moisture retention properties. It is used in make-ups, toothpastes and as a binding agent in pharmaceuticals.

The majority of the bulk uses of bentonite are in the manufacturing, energy and construction industries. Bentonite is used as a thickening agent in drilling “mud” in the energy industry. Because it expands to several times its dry mass when combined with water, it is also used as “plug mud” for filling and sealing used well holes. And

Bentonite is also a key component in taconite, an iron ore product used in steel manufacturing. Bentonite is combined with the pulverized iron ore to make pellets and serves as a flux (to remove impurities) during the smelting process.

Wyoming bentonite production from 1921 to the present. Production

The first commercial production of bentonite was in Rock Creek (Albany County) Wyoming in 1888. That first shipment was sent to Philadelphia for use in cosmetics. Continuous production records start in 1921. Production trended upwards until the late 1970’s. The precipitous downturn in the early 1980’s was due to decline in the oil prices. Production recovered later in the decade. The fracking revolution in the energy sector helped to significantly increase production in the first decade of this century, only to drop back with the recession of 2007-2008. In recent years production history of bentonite reflects the fortunes of its chief use as drilling fluid or “mud” for the energy industry. 5,157,153 tons of bentonite were mined in Wyoming in 2019, an 18 percent increase from 2018. However, with the reduction of oil well drilling in 2019, the cat litter industry has dominated with significant growth in 2019 and 2020.

Wyoming is the largest producer of bentonite in the U.S.

Producing about 93% of the nation’s bentonite (2018). The U.S. is the second largest producer in the world after China. There are six companies mining bentonite in Wyoming. All Wyoming bentonite is mined from surface deposits at 12 mine locations. There are three main areas of production; the extreme northeast, the Big Horn Basin and a smaller concentration just north of Casper. There are also 15 processing mills in the state, which refine the mineral. Mined material is dried and sorted by grade, with different grades being used for specific products. The material is then pulverized and screened, before bagging or bulk shipping by rail or truck to contracted buyers. Bentonite reserves are not monitored as closely as in the fossil fuel industry, but there is estimated to be centuries of minable bentonite at current production rates. One estimate puts the range of Wyoming reserves at between 1.3 and 2.1 billion tons. Wyoming Mining Association • Page 4

Bentonite is produced from shallow surface mines, typically less than 40 feet deep. Deposits may be made up of different layers and grades. The topsoil is first removed and stockpiled separately. The raw bentonite material is removed with scrapers and shovels to be loaded into trucks and transported to nearby processing facilities or placed in stockpiles to dry. Most Wyoming bentonite mines use the castback system for mining. The diagram below illustrates the general process. Surface mines follow strict laws and work closely with the Environmental Protection Agency (EPA), Wyoming Department of Environmental Quality (WDEQ), Office of Surface Mining (OSM), Wyoming Game and Fish, and the Bureau of Land Management (BLM). Each mining permit application must also include a reclamation plan. As permitted mining in an area is completed, reclamation starts immediately thereafter. Several federal and state agencies oversee compliance. Without exception, the mined lands disturbed are returned to better than their original condition. Reclamation Specialists manage approved processes over multiple years until successful reclamation triggers their permit and bond release. The land is finally returned to grazing and or wildlife habitat use depending upon the land ownership. The castback system uses a “tiered” process for backfilling open pits. This places poor quality overburden from pit excavation into the lower third of the previous pits. The upper portion of overburden, removed from the next pit

and placed on top of the previous pit’s lower quality material. This procedure enables the overburden closest to the bentonite to be buried as deep as possible. The material immediately below the subsoil from the next successive pit is then placed on top of the upper portion of the overburden removed from the previous pit. The material from the last tier is brought to the approximate original grade and blended with the surrounding native lands. Topsoil and subsoil are then directly hauled from the next pit and placed on top as the final tier. Finally, an approved selection of seed mixtures are sown to return the area to its natural state. However, it is not just grass species and shrubs that are replaced. Reclamation includes the replacement of rock outcroppings to provide prey-based habitats for eagles and other predators. Water features such as ponds and wetlands are re-established as well as shrubs, all in keeping with the natural Wyoming landscape. At that point, the land goes under another timeline of three to five years of management and observation to ensure the successful reclamation. Wyoming bentonite mines are committed to the protection of wildlife species including the sage grouse. The Wyoming Mining Association holds two seats on the Sage Grouse Implementation Team (SGIT) and bentonite mine employees participate as industry representatives in the decision-making process. Wildlife management and historical archeological preservation are all an integral part of the many steps it takes to mine bentonite in Wyoming.

wyoming bentonite &amp; the economy Bentonite WAGES in Wyoming Below is a comparison of median wages for the category of ‘clay, ceramic and refractory mineral mining’ for which bentonite belongs, to the median income in the state of Wyoming for 2018 (latest data). Median wages for bentonite industry workers in 2018 were $12,574 (20 percent) higher than the median state wage. The bentonite industry occupies a small, but important segment of Wyoming’s economy. This is especially true for those rural communities that support the industry in the state. These relatively high-paying jobs are especially crucial to these communities. And the diversity of uses for bentonite means that these are likely more secure jobs than other resource-based industry jobs.

Economic benefits to Wyoming’s economy Bentonite occupies a niche industry, albeit an important one, in Wyoming’s mining sector. Unlike coal, gas and oil, many people, even in Wyoming, have little awareness of what bentonite is, that it is produced in the state, or its importance as an ingredient. And yet bentonite provides a significant economic boost to a few rural communities and provides over 770 high-paying mining jobs across Wyoming. Bentonite mining also supports two additional jobs in the local economy for every one mining job. Wyoming mines produced more than 5.1 million tons of bentonite for various products in 2019 contributing an estimated $344 million to Wyoming’s economy with an average payroll, including benefits, of over $132 million. The general price of bentonite has stayed relatively stable recently (especially when compared to oil markets). This is mostly likely due to the increased demand for sodium bentonite for cat litter, even as demand for drilling fluid had declined. Unlike a mineral that would be marketed to a single use customer such as coal being sold to the electricity market, bentonite contracts to multiple market types. Thus, the pricing strategy is dependent upon various industry market dynamics, making it impossible to calculate a simple average price per ton valuation. Wyoming Mining Association • Page 6

A Culture of Safety Safety is a core cultural value for Wyoming bentonite mines. These mines are recognized as some of the safest mining operations in Wyoming and the world. Safe mines are productive mines. The Wyoming bentonite industry is committed to providing a safe working environment for all employees and contractors. The Mine Safety and Health Administration (MSHA) and the Wyoming State Mine Inspector monitor all Wyoming mines under approved safety regulations year around. Over 770 bentonite mining employees work over 1.5 million man hours per year. In 2019 there were five minor incidents reported to the Wyoming Mine Inspector, including one fracture and four sprains. All Wyoming bentonite mines employees are dedicated safety professionals, and all employees are trained in proper safety practices to foster a safe work environment to build and maintain a culture of safety. All new employees attend safety training prior to their first day on the job. They continually participate in safety refresher training as well as a 2 day Safety Seminar, produced yearly by the Wyoming Mining Association. Every shift starts with a safety share which consists of employees identifying a relevant safety example for all employees to be alert for. Employees will also receive safety briefings as well as walk-around inspections of their equipment and work areas. Employees may also earn safety bonuses to encourage safe and vigilant work practices.

community partners The Bentonite Mining Industry lives right in your neighborhood and works right alongside you. These mining companies generously provide financial and volunteer support in their communities. Every day you will see them donating to local food banks, coaching youth sports leagues, assisting with local drives and lending their neighbors a helping hand. Look for them next time you see a need. They are there in the mix of neighbors, making your community a better place to live and raise a family.

The ‘clay of a thousand uses’ impacting our everyday lives.

Wyoming Mining Association brings you a market report on Wyoming Bentonite. | "The Clay of a Thousand Uses." 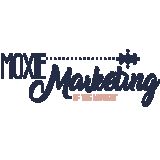 Moxie Marketing of the Midwest