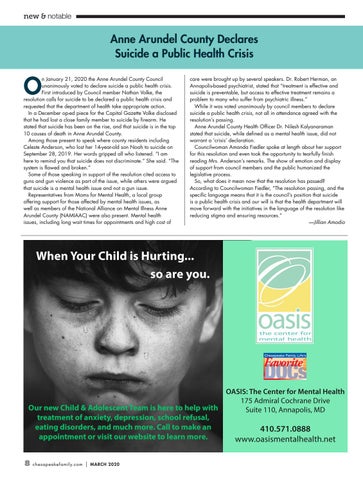 n January 21, 2020 the Anne Arundel County Council unanimously voted to declare suicide a public health crisis. First introduced by Council member Nathan Volke, the resolution calls for suicide to be declared a public health crisis and requested that the department of health take appropriate action. In a December op-ed piece for the Capital Gazette Volke disclosed that he had lost a close family member to suicide by firearm. He stated that suicide has been on the rise, and that suicide is in the top 10 causes of death in Anne Arundel County. Among those present to speak where county residents including Celeste Anderson, who lost her 14-year-old son Noah to suicide on September 28, 2019. Her words gripped all who listened. “I am here to remind you that suicide does not discriminate.” She said. “The system is flawed and broken.” Some of those speaking in support of the resolution cited access to guns and gun violence as part of the issue, while others were argued that suicide is a mental health issue and not a gun issue. Representatives from Moms for Mental Health, a local group offering support for those affected by mental health issues, as well as members of the National Alliance on Mental Illness Anne Arundel County (NAMIAAC) were also present. Mental health issues, including long wait times for appointments and high cost of

care were brought up by several speakers. Dr. Robert Herman, an Annapolis-based psychiatrist, stated that “treatment is effective and suicide is preventable, but access to effective treatment remains a problem to many who suffer from psychiatric illness.” While it was voted unanimously by council members to declare suicide a public health crisis, not all in attendance agreed with the resolution’s passing. Anne Arundel County Health Officer Dr. Nilesh Kalyanaraman stated that suicide, while defined as a mental health issue, did not warrant a ‘crisis’ declaration. Councilwoman Amanda Fiedler spoke at length about her support for this resolution and even took the opportunity to tearfully finish reading Mrs. Anderson’s remarks. The show of emotion and display of support from council members and the public humanized the legislative process. So, what does it mean now that the resolution has passed? According to Councilwoman Fiedler, “The resolution passing, and the specific language means that it is the council’s position that suicide is a public health crisis and our will is that the health department will move forward with the initiatives in the language of the resolution like reducing stigma and ensuring resources.” —Jillian Amodio

Our new Child & Adolescent Team is here to help with treatment of anxiety, depression, school refusal, eating disorders, and much more. Call to make an appointment or visit our website to learn more. 8 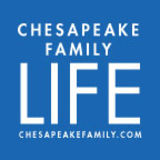