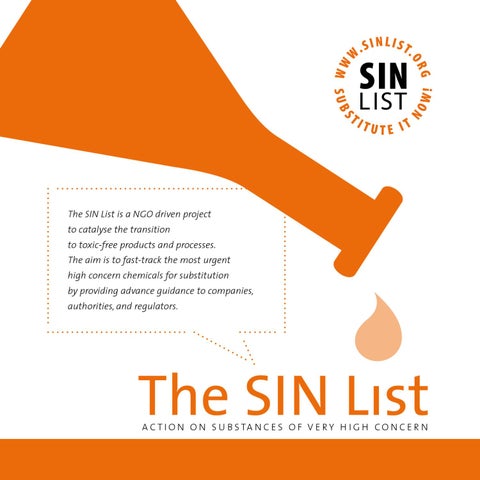 to toxic-free products and processes.

by providing advance guidance to companies, authorities, and regulators.

The European Union regulation on chemicals, REACH, entered into force in 2007. Under REACH, thousands of chemicals manufactured in or imported into the EU will have to be registered. The most hazardous chemicals are defined as Substances of Very High Concern. These include chemicals that can cause cancer, damage our reproductive system, or alter our DNA, as well as toxic substances that a ­ ccumulate in nature with serious and long-term irreversible effects. At least 1500 substances fulfil the REACH criteria of Substances of Very High Concern. REACH provides the framework for dealing with these high concern chemicals, but the substances are only regulated under REACH after individually being assessed through either Restriction or Authorisation. Once a chemical is subject to Authorisation, it cannot be produced or used in the EU unless approval has been granted for a specific use.

One of the main objectives of REACH is to protect human health and the environment. However, to achieve this goal, an effective implementation of REACH depends on proper regulation of the most hazardous chemicals, the Substances of Very High Concern. This is where the SIN List enters the picture. The aim of the SIN List project is to ensure that REACH Authorisation procedure is an effective tool to fast-track the most hazardous substances for substitution and to facilitate toxic use reduction by businesses and other actors. ChemSec, in collaboration with other NGOs in the EU and US, presented the first SIN List in 2008. The SIN List encompasses highly hazardous chemicals present in products we come into contact with every day, such as detergents and paints, electronics, residential buildings, toys, apparel and clothes.

The success of REACH will depend on a prompt, effective process for identifying hazardous chemicals on the European market and replacing them with safer alternatives

The SIN List identifies Substances of Very High Concern according to REACH criteria through the combined efforts of public interest groups, scientists, and technical experts. The list is based on credible, publicly available information from existing databases, scientific studies, and new research.

properties known to cause cancer, alter DNA or damage reproductive system. They are known as CMRs (Carcinogenic, Mutagenic, or toxic to Reproduction), and correspond to Articles 57 a-c of REACH. The CMR substances on the SIN List have been derived from the official EU list of classified substances.

are substances that are either: • known to cause cancer, alter DNA or affect reproductive functions (CMR substances) • persistent, bio-accumulative and toxic (PBT substances) • substances of equivalent level of concern (e.g. endocrine disrupting chemicals)

CMRs are chemicals that can cause cancer, alter DNA and damage reproductive systems

substances that can cause problems on a longer time scale and that accumulate in the food chain. These are known as PBTs (Persistent, Bio-accumulative and Toxic). They are mentioned in REACH Article 57 d. These substances do not easily break down, instead they build up in nature (such as in the fatty tissue of mammals, including humans) with the potential to cause serious and long term irreversible effects. Due to their longevity, they have the potential to cause great harm even at low toxicity, as concentrations increase over time. vPvBs are substances that are very Persistent and very Bio-accumulative (REACH Article 57 e).

PBTs are substances that do not easily break down, instead they build up in nature with the potential to cause serious and long- term irreversible effects

The PBT substances on the SIN List have been selected from an official EU list created by a PBT Working Group made up of EU Member State representatives and industry.

Substances of Equivalent Concern The

SIN List also contains Substances of Equivalent Concern, a safety-net category set up in REACH to control substances which are not automatically covered by the other categories, but which nonetheless give rise to an equivalent level of concern in terms of potential damage (REACH Article 57 f). REACH provides guidelines how to apply the regulation in identifying Equivalent Concern chemicals. Equivalent Concern substances include substances with endocrine disrupting properties for which there is evidence of probable serious effects to human health or the environment.

Substances of Equivalent Concern are, for example, substances that potentially disturb and alter the hormone system

Since 2007, REACH has provided the framework for the regulation of chemicals in Europe. But the essence of the law, the identification and regulation of the most dangerous chemicals, lags behind. The SIN (Substitute It Now!) List aims to speed up the REACH regulatory process and inspire legislators to move forward on the issue, by listing chemicals that are identified by ChemSec as Substances of Very High Concern according to REACH criteria. By using REACH’s own criteria to identify high concern chemicals, the SIN List provides a glimpse into the future of European chemicals regulation. The result is a tool that facilitates companies’ efforts to reduce their use of toxic substances, by giving guidance on which chemicals to start substituting – as well as highlighting the financial risks to investors associated with hazardous chemicals likely to be subject to future regulation.

ChemSec, the International Chemical Secretariat, is a non-profit organisation working for a toxic free world. To achieve this, we work to highlight the health and environmental risks of hazardous substances, make accurate, science-based information readily available, engage business and speed up legislative processes. This approach puts ChemSec in a unique position to promote open dialogue between authorities, business, science and civil society so that effective action is taken. www.chemsec.org

The SIN List is today inspiring a wide range of actors to move away from hazardous chemicals. By offering a look into the future of chemicals regulation by strictly building on official REACH criteria, the SIN List has become a tool used widely around the world.  Many companies use the SIN List, and the publicly available SIN List database, as a hands-on instrument in their efforts towards manufacturing and selling safer and more environmentally friendly products. By using the SIN List, these companies can start substituting high concern chemicals ahead of legislation, avoiding significant business risk in the process.

A concrete and widely used tool

A tool offering guidance to legislators, businesses, investors, and NGOs on the future of EU chemicals regulation

 Investors and financial analysts are increasingly using the SIN List to avoid investing in companies producing harmful substances, and the financial risk that that implies.  The SIN List is also a campaign tool used by health and consumer groups urging safer products and stronger regulations.  Regulatory bodies and legislative processes outside of Europe, including in the US and Asia, are inspired by and using the SIN List when developing new chemicals regulations.

The SIN List is an NGO driven project to catalyze the transition to toxic-free products and processes. The aim is to fast-track the most urgent high concern chemicals for substitution, by informing authorities and providing advance guidance to companies, consumers and regulators. This is a quick and easy introduction to the SIN List - why is it needed, who is behind it, what it contains and who is using it.