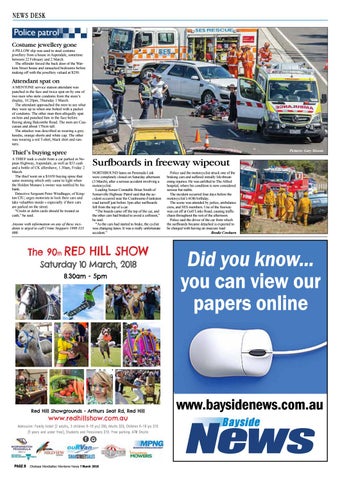 A PILLOW slip was used to steal costume jewellery from a house in Aspendale, sometime between 22 February and 2 March. The offender forced the back door of the Watkins Street house and ransacked bedrooms before making off with the jewellery valued at $250.

Attendant spat on A MENTONE service station attendant was punched in the face and twice spat on by one of two men who stole condoms from the store’s display, 10.20pm, Thursday 1 March. The attendant approached the men to see what they were up to when one bolted with a packet of condoms. The other man then allegedly spat on him and punched him in the face before fleeing along Balcombe Road. The men are Caucasian and about 170cm tall. The attacker was described as wearing a grey hoodie, orange shorts and white cap. The other was wearing a red T-shirt, black shirt and runners.

Thief ’s buying spree A THIEF took a credit from a car parked in Nepean Highway, Aspendale, as well as $55 cash and a bottle of CK aftershave, 1.30am, Friday 2 March. The thief went on a $1650 buying spree that same morning which only came to light when the Holden Monaro’s owner was notified by his bank. Detective Sergeant Peter Windhager, of Kington CIU, urges motorists to lock their cars and take valuables inside – especially if their cars are parked on the street. “Credit or debit cards should be treated as cash,” he said. Anyone with information on any of these incidents is urged to call Crime Stoppers 1800 333 000.

Surfboards in freeway wipeout NORTHBOUND lanes on Peninsula Link were completely closed on Saturday afternoon (3 March), after a serious accident involving a motorcyclist. Leading Senior Constable Brian Smith of Somerville Highway Patrol said that the accident occurred near the Cranbourne-Frankston road turnoff just before 3pm after surfboards fell from the top of a car. “The boards came off the top of the car, and the other cars had braked to avoid a collision,” he said. “As the cars had started to brake, the cyclist was changing lanes. It was a really unfortunate accident.”

Police said the motorcyclist struck one of the braking cars and suffered initially life-threatening injuries. He was airlifted to The Alfred hospital, where his condition is now considered serious but stable. The incident occurred four days before the motorcyclist’s 6Oth birthday. The scene was attended by police, ambulance crew, and SES members. Use of the freeway was cut off at Golf Links Road, causing traffic chaos throughout the rest of the afternoon. Police said the driver of the car from which the surfboards became detached is expected to be charged with having an insecure load Brodie Cowburn