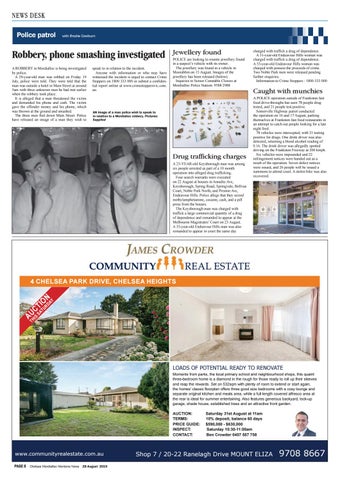 Robbery, phone smashing investigated A ROBBERY in Mordialloc is being investigated by police. A 29-year-old man was robbed on Friday 19 July, police were told. They were told that the man was outside a hotel in Main Street at around 5am with three unknown men he had met earlier when the robbery took place. It is alleged that a man threatened the victim and demanded his phone and cash. The victim gave the offender money and his phone, which was thrown at the ground and smashed. The three men fled down Main Street. Police have released an image of a man they wish to

speak to in relation to the incident. Anyone with information or who may have witnessed the incident is urged to contact Crime Stoppers on 1800 333 000 or submit a confidential report online at www.crimestoppersvic.com. au.

AN image of a man police wish to speak to in relation to a Mordialloc robbery. Pictures: Supplied

Drug trafficking charges A 25-YEAR-old Keysborough man was among six people arrested as part of a 10 month operation into alleged drug trafficking. Four search warrants were executed on 22 August at houses in Annafee Ave, Keysborough, Spring Road, Springvale, Bellvue Court, Noble Park North, and Preston Ave, Endeavour Hills. Police allege that they seized methylamphetamine, cocaine, cash, and a pill press from the houses. The Keysborough man was charged with traffick a large commercial quantity of a drug of dependence and remanded to appear at the Melbourne Magistrates’ Court on 23 August. A 35-year-old Endeavour Hills man was also remanded to appear in court the same day

Caught with munchies A POLICE operation outside of Frankston fast food drive-throughs has seen 78 people drug tested, and 21 people test positive. Somerville Highway patrol conducted the operation on 16 and 17 August, parking themselves at Frankston fast food restaurants in an attempt to catch out people looking for a late night feed. 78 vehicles were intercepted, with 21 testing positive for drugs. One drink driver was also detected, returning a blood alcohol reading of 0.16. The drink driver was allegedly spotted driving on the Frankston Freeway at 200 kmph. Six vehicles were impounded and 22 infringement notices were handed out as a result of the operation. Seven defect notices were issued, and 26 people will be issued a summons to attend court. A stolen bike was also recovered.

LOADS OF POTENTIAL READY TO RENOVATE

Moments from parks, the local primary school and neighbourhood shops, this quaint three-bedroom home is a diamond in the rough for those ready to roll up their sleeves and reap the rewards. Set on 532sqm with plenty of room to extend or start again, the homes’ classic floorplan offers three good size bedrooms with a cosy lounge and separate original kitchen and meals area, while a full length covered alfresco area at the rear is ideal for summer entertaining. Also features generous backyard, lock-up garage, shade house, established trees and an attractive front garden.