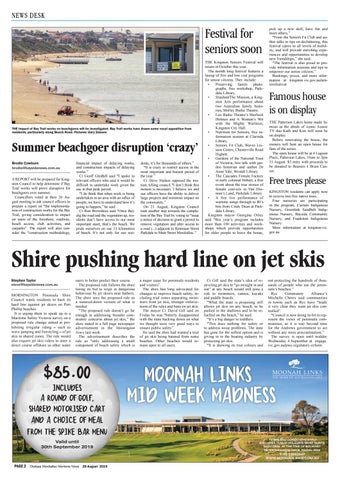 THE impact of Bay Trail works on beachgoers will be investigated. Bay Trail works have drawn some vocal opposition from residents, particularly along Beach Road. Pictures: Gary Sissons

Summer beachgoer disruption ‘crazy’ Brodie Cowburn brodie@baysidenews.com.au A REPORT will be prepared for Kingston Council to help determine if Bay Trail works will prove disruptive for beachgoers over summer. Councillors voted at their 26 August meeting to ask council officers to prepare a report on “the implementation of construction works for the Bay Trail, giving consideration to impact on users of the foreshore, roadway, beach access, club activities, and carparks”. The report will also consider the “construction methodology,

financial impact of delaying works, and construction impacts of delaying works.” Cr Geoff Gledhill said “I spoke to relevant officers who said it would be difficult to undertake work given the use in that peak period. “I do think that when work is being undertaken in an area with an influx of people, we have to understand how it’s going to happen,” he said. Cr Ron Brownlees said “Once they dig the road and the vegetation up, residents don’t have access to our most important asset, that’s the beach. We pride ourselves on our 13 kilometres of beach. It’s not only for our resi-

dents, it’s for thousands of others.” “It is crazy to restrict access in the most important and busiest period of the year.” Cr Steve Staikos opposed the motion, telling council “I don’t think this motion is necessary. I believe we and our officers have the ability to deliver large projects and minimise impact on the community.” On 21 August, Kingston Council took another step towards the completion of the Bay Trail by voting to “issue a notice of decision to grant a permit to remove vegetation and alter access to a road (...) adjacent to Rennison Street Parkdale to Main Street Mordialloc.”

pick up a new skill, have fun and meet others.” “From the Seniors Fit Club and author talks to tips on decluttering, this festival caters to all levels of mobility, and will provide enriching experiences and opportunities to develop new friendships,” she said. “The festival is also proud to provide information sessions and tips to empower our senior citizens.” Bookings, prices, and more information at kingston.vic.gov.au/seniorsfestival

Famous house is on display THE Patterson Lakes home made famous as the abode of iconic Aussie TV duo Kath and Kim will soon be on display. Before renovating the house, the owners will host an open house for fans of the series. The open house will be at 4 Lagoon Place, Patterson Lakes, 10am to 3pm 31 August. $5 entry with proceeds to be donated to Beanies 4 Brain Cancer.

Shire pushing hard line on jet skis Stephen Taylor steve@baysidenews.com.au MORNINGTON Peninsula Shire Council wants residents to back its hard line against jet skiers on Port Phillip beaches. It is urging them to speak up in a Maritime Safety Victoria survey on a proposed rule change aimed at prohibiting irregular riding – such as wave jumping and freestyling – of jet skis in shared zones. The rule would also require jet skis riders to steer a direct course offshore so other water

users to better predict their course. The proposed rule follows the shire losing its bid to reign in dangerous behaviour by jet skiers near bathers. The shire sees the proposed rule as a watered-down version of what is needed. “The proposed rule doesn’t go far enough in addressing broader community concerns about jet skis,” the shire stated in a full page newspaper advertisement in the Mornington News last week. The advertisement describes the rule as “only addressing a small component of beach safety which is

a major issue for peninsula residents and visitors”. The shire has long advocated for changes to improve beach safety, including trial zones separating swimmers from jet skis, stronger enforcement of the rules and bans on jet skis. The mayor Cr David Gill said on Friday he was “bitterly disappointed with the state backing down on what we thought were very good ways to ensure public safety”. He said the shire had wanted a trial of jet skis being banned from some beaches. Other beaches would remain open to all users.

Cr Gill said the state’s idea of restricting jet skis to “go straight in and out” at any beach would still pose a risk to swimmers, canoes, kayaks and paddle boards. “What the state is proposing still allows jet skis on any beach, to be parked in the shallows and to be refuelled on the beach,” he said. “It’s a big danger to toddlers. “This does nothing for safety or to address noise problems. The state has gone for the softest option and is giving in to the boating industry by protecting jet skis. “It is showing its true colours and

not protecting the hundreds of thousands of people who use the peninsula’s beaches.” Rye Community Alliance’s Mechelle Cheers said communities in towns such as Rye have “made it very clear they want jet skis controlled”. “Council is now doing its bit to represent the views of peninsula communities, so it is way beyond time for the Andrews government to act without any more procrastination.” The survey is open until midday Wednesday 4 September at engage. vic.gov.au/pwc-regulatory-reform