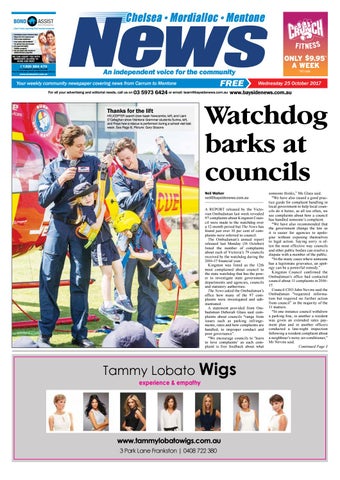 Thanks for the lift

Watchdog barks at councils Neil Walker neil@baysidenews.com.au A REPORT released by the Victorian Ombudsman last week revealed 97 complaints about Kingston Council were made to the watchdog over a 12-month period but The News has found just over 10 per cent of complaints were referred to council. The Ombudsman’s annual report released last Monday (16 October) listed the number of complaints about each of Victoria’s 79 councils received by the watchdog during the 2016-17 financial year. Kingston was listed as the 12th most complained about council to the state watchdog that has the power to investigate state government departments and agencies, councils and statutory authorities. The News asked the Ombudsman’s office how many of the 97 complaints were investigated and substantiated. A statement provided from Ombudsman Deborah Glass said complaints about councils “range from issues such as parking infringements, rates and how complaints are handled, to improper conduct and poor governance”. “We encourage councils to ‘learn to love complaints’ as each complaint is free feedback about what

someone thinks,” Ms Glass said. “We have also issued a good practice guide for complaint handling in local government to help local councils do it better, as all too often, we see complaints about how a council has handled someone’s complaint. “We have also recommended that the government change the law so it is easier for agencies to apologise without exposing themselves to legal action. Saying sorry is often the most effective way councils and other public bodies can resolve a dispute with a member of the public. “In the many cases where someone has a legitimate grievance, an apology can be a powerful remedy.” Kingston Council confirmed the Ombudsman’s office had contacted council about 11 complaints in 201617. Council CEO John Nevins said the Ombudsman “requested information but required no further action from council” in the majority of the 11 matters. “In one instance council withdrew a parking fine, in another a resident was given an extended rates payment plan and in another officers conducted a late-night inspection following a resident complaint about a neighbour’s noisy air-conditioner,” Mr Nevins said. Continued Page 3