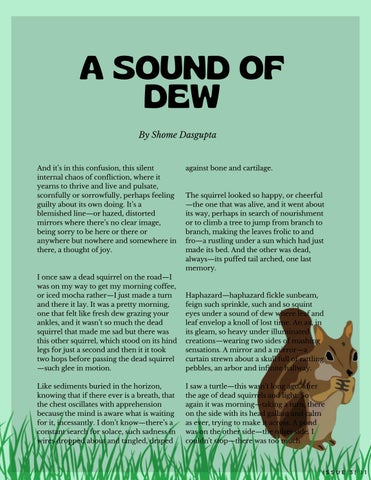 A SOUND OF DEW By Shome Dasgupta

And it’s in this confusion, this silent internal chaos of confliction, where it yearns to thrive and live and pulsate, scornfully or sorrowfully, perhaps feeling guilty about its own doing. It’s a blemished line—or hazed, distorted mirrors where there’s no clear image, being sorry to be here or there or anywhere but nowhere and somewhere in there, a thought of joy.

against bone and cartilage.

The squirrel looked so happy, or cheerful —the one that was alive, and it went about its way, perhaps in search of nourishment or to climb a tree to jump from branch to branch, making the leaves frolic to and fro—a rustling under a sun which had just made its bed. And the other was dead, always—its puffed tail arched, one last memory.

I once saw a dead squirrel on the road—I was on my way to get my morning coffee, or iced mocha rather—I just made a turn and there it lay. It was a pretty morning, one that felt like fresh dew grazing your ankles, and it wasn’t so much the dead squirrel that made me sad but there was this other squirrel, which stood on its hind legs for just a second and then it it took two hops before passing the dead squirrel —such glee in motion.

Haphazard—haphazard fickle sunbeam, feign such sprinkle, such and so squint eyes under a sound of dew where leaf and leaf envelop a knoll of lost time. An ax, in its gleam, so heavy under illuminated creations—wearing two sides of mashing sensations. A mirror and a mirror—a curtain strewn about a skull full of rattling pebbles, an arbor and infinite hallway.

Like sediments buried in the horizon, knowing that if there ever is a breath, that the chest oscillates with apprehension because the mind is aware what is waiting for it, incessantly. I don’t know—there’s a constant search for solace, such sadness in wires dropped about and tangled, draped

I saw a turtle—this wasn’t long ago, after the age of dead squirrels and light. So again it was morning—taking a turn, there on the side with its head gallant and calm as ever, trying to make it across. A pond was on the other side—the other side. I couldn&#39;t stop—there was too much 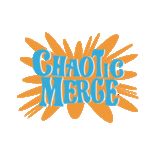