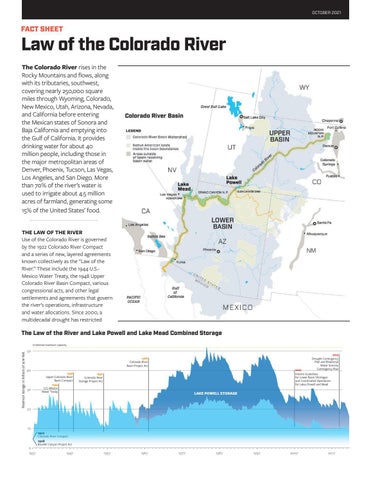 Law of the Colorado River The Colorado River rises in the Rocky Mountains and flows, along with its tributaries, southwest, covering nearly 250,000 square miles through Wyoming, Colorado, New Mexico, Utah, Arizona, Nevada, and California before entering the Mexican states of Sonora and Baja California and emptying into the Gulf of California. It provides drinking water for about 40 million people, including those in the major metropolitan areas of Denver, Phoenix, Tucson, Las Vegas, Los Angeles, and San Diego. More than 70% of the river’s water is used to irrigate about 4.5 million acres of farmland, generating some 15% of the United States’ food.

THE LAW OF THE RIVER Use of the Colorado River is governed by the 1922 Colorado River Compact and a series of new, layered agreements known collectively as the “Law of the River.” These include the 1944 U.S.Mexico Water Treaty, the 1948 Upper Colorado River Basin Compact, various congressional acts, and other legal settlements and agreements that govern the river’s operations, infrastructure and water allocations. Since 2000, a multidecadal drought has restricted

Reservoir storage in millions of acre-feet

water availability, while population and water demand throughout the basin has continued to expand. In 2007, a set of interim shortage guidelines were finalized which outline a method to balance the amount of water available between the upper and lower basins. Additional binational agreements and drought contingency plans have followed but those recent agreements all expire in 2026. Negotiations for a long-term shortage-sharing agreement are underway, and will soon mean an updated Law of the River.

2007 Interim Guidelines for Lower Basin Shortages and Continued Operations for Lake Mead Outline a method for determining annual releases and coordinated operations of Lake Powell and Lake Mead, based on reservoir elevations. They aim to avoid curtailment of uses in the upper basin, minimize shortages in the lower basin, not adversely affect the yield for development available in the upper basin, and balance the storage volume of the reservoirs. The guidelines also allow for Intentionally Created Surplus, or water created through lower basin efficiencies or the importation of water into the system that can be stored in Lake Mead to keep storage levels up. Require the states and Department of the Interior to begin considering amendments and extensions no later than 2021 to determine what comes after the Interim Period, which ends in 2026. Negotiations have commenced.

Apportioned to both the upper and lower basins the right to consume 7.5 million acre-feet of water from the river and its tributaries annually and permitted the lower basin to develop an additional 1 million acrefeet annually. Contains a “non-depletion” requirement for the upper basin that it will not cause the flow of the river at Lee Ferry to be depleted below 75 million acre-feet for any 10-year period. If the upper basin were forced to cut back its use to meet the requirement, it would only pertain to water rights dated later than 1922. 1928 Boulder Canyon Project Act Authorized Hoover Dam, which formed Lake Mead, and the All-American Canal, which delivers Colorado River water to California’s Imperial and Coachella valleys. Authorized the lower basin to enter an agreement dividing its 7.5 million acre-foot annual apportionment, giving California 4.4 million acre-feet, Arizona 2.8 million, and Nevada 300,000. 1944 Mexican Treaty on the Rio Grande, Tijuana and Colorado Rivers Guaranteed delivery of 1.5 million acre-feet of Colorado River water per year to Mexico except in times of extraordinary drought, when the U.S. can reduce deliveries in the same proportion as it cuts its consumptive use. The responsibility to ensure this water reaches Mexico has been shared equally by the upper and lower basins. 1948 Upper Colorado River Basin Compact Apportioned percentages of the water available for consumptive use in the upper basin to each upper basin state plus Arizona, which receives 50,000 acre-feet of water per year. After subtracting Arizona’s use, the upper basin states receive: Colorado, 51.75%; New Mexico, 11.25%; Utah, 23%; and Wyoming, 14%.

2019 Drought Contingency Plans These plans, one for the upper basin and one for the lower, build on the 2007 Interim Guidelines to help address the growing system imbalance on the Colorado River. The lower basin plan requires the three lower basin states to take more significant cuts when Lake Mead reaches critical storage levels. The upper basin plan includes weather modification, special releases from upstream Colorado River Storage Project reservoirs to improve storage levels in Lake Powell, and a dedicated 500,000 acrefoot drought pool of protected water storage to meet compact requirements. The drought pool would be filled via a demand management program consisting of voluntary, temporary, compensated reduction of consumptive use, only if the program was determined to be feasible and was agreed to by all four upper basin states. The drought contingency plans expire in 2026, at the same time as the Interim Guidelines.

NEED TO KNOW Consumptive Use Water use that permanently withdraws water from its source. International Boundary and Water Commission (IBWC) Administers the 1944 U.S.-Mexico Water Treaty and settles differences as they arise. New agreements forged, known as “minutes,” are a record of understanding between the two countries, not treaty amendments. Native American Tribes Thirty Tribes in the Colorado River Basin collectively hold water rights to divert 3.2 million acrefeet of Colorado River water each year or more than 20% of the river’s average annual supply. Not all of the water is yet in use, and 12 of the Tribes’ water rights claims are still unresolved. Upper and Lower Basin The two regions the Colorado River Compact divides the watershed into, with the dividing point at Lee Ferry, Ariz. Upper basin states include Colorado, Wyoming, Utah and New Mexico, and lower basin states include Arizona, Nevada and California. Upper Colorado River Commission (UCRC) Consisting of a commissioner from each upper basin state and one federal appointee, works to ensure compact compliance and allocation of water to the upper basin states. U.S. Bureau of Reclamation Federal agency that owns and operates most major reservoirs and hydropower plants throughout the basin and works with basin states to resolve imbalances. Also acts as “Watermaster” of the lower basin, managing delivery of Colorado River water from Lake Mead.

Produced by Water Education Colorado, an independent and nonpartisan nonprofit working to ensure Coloradans are informed on water issues, in collaboration with its news initiative, Fresh Water News. 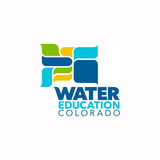