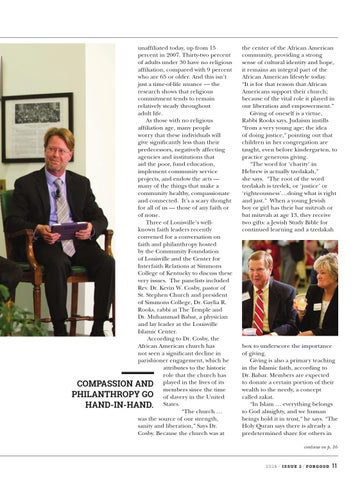 unaffiliated today, up from 15 percent in 2007. Thirty-two percent of adults under 30 have no religious affiliation, compared with 9 percent who are 65 or older. And this isn’t just a time-of-life nuance — the research shows that religious commitment tends to remain relatively steady throughout adult life. As those with no religious affiliation age, many people worry that these individuals will give significantly less than their predecessors, negatively affecting agencies and institutions that aid the poor, fund education, implement community service projects, and endow the arts — many of the things that make a community healthy, compassionate and connected. It’s a scary thought for all of us — those of any faith or of none. Three of Louisville’s wellknown faith leaders recently convened for a conversation on faith and philanthropy hosted by the Community Foundation of Louisville and the Center for Interfaith Relations at Simmons College of Kentucky to discuss these very issues. The panelists included Rev. Dr. Kevin W. Cosby, pastor of St. Stephen Church and president of Simmons College, Dr. Gaylia R. Rooks, rabbi at The Temple and Dr. Muhammad Babar, a physician and lay leader at the Louisville Islamic Center. According to Dr. Cosby, the African American church has not seen a significant decline in parishioner engagement, which he attributes to the historic role that the church has COMPASSION AND played in the lives of its members since the time PHILANTHROPY GO of slavery in the United HAND-IN-HAND. States. “The church … was the source of our strength, sanity and liberation,” Says Dr. Cosby. Because the church was at

the center of the African American community, providing a strong sense of cultural identity and hope, it remains an integral part of the African American lifestyle today. “It is for that reason that African Americans support their church; because of the vital role it played in our liberation and empowerment.” Giving of oneself is a virtue, Rabbi Rooks says, Judaism instills “from a very young age; the idea of doing justice,” pointing out that children in her congregation are taught, even before kindergarten, to practice generous giving. “The word for ‘charity’ in Hebrew is actually tzedakah,” she says. “The root of the word tzedakah is tzedek, or ‘justice’ or ‘righteousness’…doing what is right and just.” When a young Jewish boy or girl has their bar mitzvah or bat mitzvah at age 13, they receive two gifts: a Jewish Study Bible for continued learning and a tzedakah

box to underscore the importance of giving. Giving is also a primary teaching in the Islamic faith, according to Dr. Babar. Members are expected to donate a certain portion of their wealth to the needy, a concept called zakat. “In Islam … everything belongs to God almighty, and we human beings hold it in trust,” he says. “The Holy Quran says there is already a predetermined share for others in continue on p. 16

ForGood is a publication of the Community Foundation of Louisville. At the Community Foundation, we are committed to promoting the understanding and participation in philanthropy in all of its different shapes and forms. This publication is an expression of that commitment that we hope helps to inform, inspire and create a community of thoughtful citizens dedicated to improving the world around them. 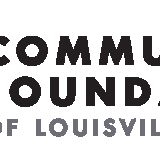