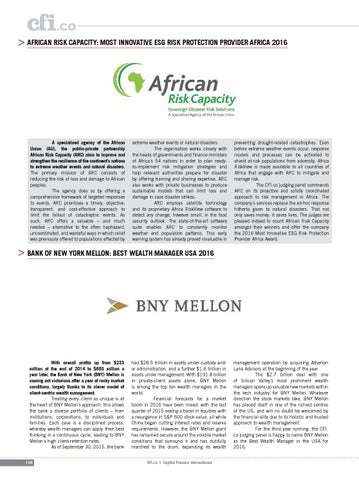 A specialised agency of the African Union (AU), the public-private partnership African Risk Capacity (ARC) aims to improve and strengthen the resilience of the continent’s nations to extreme weather events and natural disasters. The primary mission of ARC consists of reducing the risk of loss and damage to African peoples. The agency does so by offering a comprehensive framework of targeted responses to events. ARC prioritises a timely, objective, transparent, and cost-effective approach to limit the fallout of catastrophic events. As such, ARC offers a valuable – and much needed – alternative to the often haphazard, uncoordinated, and wasteful ways in which relief was previously offered to populations affected by

extreme weather events or natural disasters. The organisation works closely with the heads of governments and finance ministers of Africa’s 54 nations in order to plan readyto-implement risk mitigation strategies and help relevant authorities prepare for disaster by offering training and sharing expertise. ARC also works with private businesses to produce sustainable models that can limit loss and damage in case disaster strikes. ARC employs satellite technology and its proprietary Africa RiskView software to detect any change, however small, in the food security outlook. The state-of-the-art software suite enables ARC to constantly monitor weather and population patterns. This early warning system has already proved invaluable in

preventing drought-related catastrophes. Even before extreme weather events occur, response models and processes can be activated to shield at-risk populations from adversity. Africa RiskView is made available to all countries of Africa that engage with ARC to mitigate and manage risk. The CFI.co judging panel commends ARC on its proactive and solidly coordinated approach to risk management in Africa. The company’s services replace the ad-hoc response hitherto given to natural disasters. That not only saves money: it saves lives. The judges are pleased indeed to count African Risk Capacity amongst their winners and offer the company the 2016 Most Innovative ESG Risk Protection Provider Africa Award.

With overall profits up from $233 million at the end of 2014 to $693 million a year later, the Bank of New York (BNY) Mellon is coming out victorious after a year of rocky market conditions, largely thanks to its clever model of client-centric wealth management. Treating every client as unique is at the heart of BNY Mellon’s approach; this allows the bank a diverse portfolio of clients – from institutions, corporations, to individuals and families. Each case is a disciplined process, whereby wealth managers can apply their best thinking in a continuous cycle, leading to BNY Mellon’s high client-retention rates. As of September 30, 2015, the bank 118

had $28.5 trillion in assets under custody and/ or administration, and a further $1.6 trillion in assets under management. With $191.8 billion in private-client assets alone, BNY Mellon is among the top ten wealth managers in the world. Financial forecasts for a market boom in 2016 have been mixed, with the last quarter of 2015 seeing a boost in equities with a resurgence in S&P 500 stock value, all while China began cutting interest rates and reserve requirements. However, the BNY Mellon giant has remained secure around the volatile market conditions that surround it and has dutifully marched to the drum, expanding its wealth CFI.co | Capital Finance International

management operation by acquiring Atherton Lane Advisors at the beginning of the year. The $2.7 billion deal with one of Silicon Valley’s most prominent wealth managers opens up valuable new markets within the tech industry for BNY Mellon. Whatever direction the stock markets take, BNY Mellon has placed itself in one of the richest centres of the US, and will no doubt be welcomed by the financial elite due to its holistic and trusted approach to wealth management. For the third year running, the CFI. co judging panel is happy to name BNY Mellon as the Best Wealth Manager in the USA for 2016.