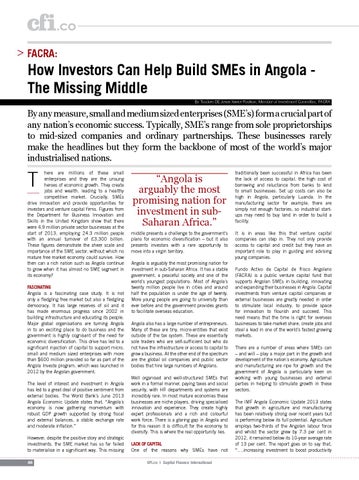 By any measure, small and medium sized enterprises (SME’s) form a crucial part of any nation’s economic success. Typically, SME’s range from sole proprietorships to mid-sized companies and ordinary partnerships. These businesses rarely make the headlines but they form the backbone of most of the world’s major industrialised nations.

here are millions of these small enterprises and they are the unsung heroes of economic growth. They create jobs and wealth, leading to a healthy competitive market. Crucially, SMEs drive innovation and provide opportunities for investors and venture capital firms. Figures from the Department for Business Innovation and Skills in the United Kingdom show that there were 4.9 million private sector businesses at the start of 2013, employing 24.3 million people with an annual turnover of £3,300 billion. These figures demonstrate the sheer scale and importance of the SME sector, without which no mature free market economy could survive. How then can a rich nation such as Angola continue to grow when it has almost no SME segment in its economy? FASCINATING Angola is a fascinating case study. It is not only a fledgling free market but also a fledgling democracy. It has large reserves of oil and it has made enormous progress since 2002 in building infrastructure and educating its people. Major global organisations are turning Angola in to an exciting place to do business and the government is highly cognisant of the need for economic diversification. This drive has led to a significant injection of capital to support micro, small and medium sized enterprises with more than $600 million provided so far as part of the Angola Investe program, which was launched in 2012 by the Angolan government. The level of interest and investment in Angola has led to a great deal of positive sentiment from external bodies. The World Bank’s June 2013 Angola Economic Update states that, “Angola’s economy is now gathering momentum with robust GDP growth supported by strong fiscal and external balances, a stable exchange rate and moderate inflation.” However, despite the positive story and strategic investments, the SME market has so far failed to materialise in a significant way. This missing 88

“Angola is arguably the most promising nation for investment in subSaharan Africa.”

traditionally been successful in Africa has been the lack of access to capital, the high cost of borrowing and reluctance from banks to lend to small businesses. Set up costs can also be high in Angola, particularly Luanda. In the manufacturing sector for example, there are simply not enough factories, so industrial startups may need to buy land in order to build a facility.

middle presents a challenge to the government’s plans for economic diversification – but it also presents investors with a rare opportunity to move into a virgin territory.

It is in areas like this that venture capital companies can step in. They not only provide access to capital and credit but they have an important role to play in guiding and advising young companies.

Angola is arguably the most promising nation for investment in sub-Saharan Africa. It has a stable government, a peaceful society and one of the world’s youngest populations. Most of Angola’s twenty million people live in cities and around half the population is under the age of twenty. More young people are going to university than ever before and the government provides grants to facilitate overseas education. Angola also has a large number of entrepreneurs. Many of these are tiny, micro-entities that exist outside of the tax system. These are essentially sole traders who are self-sufficient but who do not have the infrastructure or access to capital to grow a business. At the other end of the spectrum are the global oil companies and public sector bodies that hire large numbers of Angolans. Well organised and well-structured SMEs that work in a formal manner, paying taxes and social security, with HR departments and systems are incredibly rare. In most mature economies these businesses are niche players, driving specialised innovation and experience. They create highly expert professionals and a rich and colourful work force. There is a glaring gap in Angola and for this reason it is difficult for the economy to diversify. This is where the real opportunity lies. LACK OF CAPITAL One of the reasons why SMEs have not CFI.co | Capital Finance International

Fundo Activo de Capital de Risco Angolano (FACRA) is a public venture capital fund that supports Angolan SMEs in building, innovating and expanding their businesses in Angola. Capital investments from venture capital companies or external businesses are greatly needed in order to stimulate local industry, to provide space for innovation to flourish and succeed. This need means that the time is right for overseas businesses to take market share, create jobs and steal a lead in one of the world’s fastest growing markets. There are a number of areas where SMEs can – and will – play a major part in the growth and development of the nation’s economy. Agriculture and manufacturing are ripe for growth and the government of Angola is particularly keen on working with young businesses and external parties in helping to stimulate growth in these sectors. The IMF Angola Economic Update 2013 states that growth in agriculture and manufacturing has been relatively strong over recent years but is performing below its full potential. Agriculture employs two-thirds of the Angolan labour force and whilst the sector grew by 7.3 per cent in 2012, it remained below its 10-year average rate of 13 per cent. The report goes on to say that, “….increasing investment to boost productivity