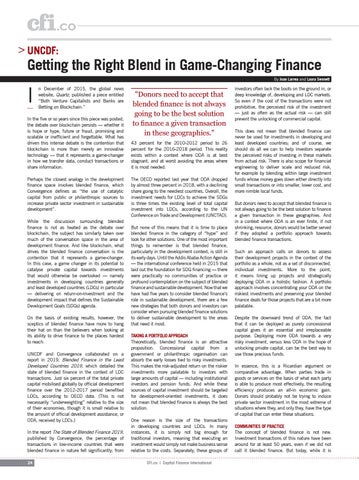 n December of 2015, the global news website, Quartz, published a piece entitled “Both Venture Capitalists and Banks are Betting on Blockchain.”

In the five or so years since this piece was posted, the debate over blockchain persists — whether it is hope or hype, future or fraud, promising and scalable or inefficient and forgettable. What has driven this intense debate is the contention that blockchain is more than merely an innovative technology — that it represents a game-changer in how we transfer data, conduct transactions or share information. Perhaps the closest analogy in the development finance space involves blended finance, which Convergence defines as “the use of catalytic capital from public or philanthropic sources to increase private sector investment in sustainable development”. While the discussion surrounding blended finance is not as heated as the debate over blockchain, the subject has similarly taken over much of the conversation space in the area of development finance. And like blockchain, what drives the blended finance conversation is the contention that it represents a game-changer. In this case, a game changer in its potential to catalyse private capital towards investments that would otherwise be overlooked — namely investments in developing countries generally and least developed countries (LDCs) in particular — delivering on return-on-investment and the development impact that defines the Sustainable Development Goals (SDGs) agenda. On the basis of existing results, however, the sceptics of blended finance have more to hang their hat on than the believers when looking at its ability to drive finance to the places hardest to reach. UNCDF and Convergence collaborated on a report in 2019, Blended Finance in the Least Developed Countries 2019, which detailed the state of blended finance in the context of LDC transactions. Just six percent of the total private capital mobilised globally by official development finance over the 2012-2017 period benefited LDCs, according to OECD data. (This is not necessarily “underweighting” relative to the size of their economies, though it is small relative to the amount of official development assistance, or ODA, received by LDCs.) In the report The State of Blended Finance 2019, published by Convergence, the percentage of transactions in low-income countries that were blended finance in nature fell significantly; from 24

"Donors need to accept that blended finance is not always going to be the best solution to finance a given transaction in these geographies." 43 percent for the 2010-2012 period to 26 percent for the 2016-2018 period. This reality exists within a context where ODA is at best stagnant, and at worst avoiding the areas where it is most needed. The OECD reported last year that ODA dropped by almost three percent in 2018, with a declining share going to the neediest countries. Overall, the investment needs for LDCs to achieve the SDGs is three times the existing level of total capital investment into LDCs, according to the UN Conference on Trade and Development (UNCTAD). But none of this means that it is time to place blended finance in the category of “hype” and look for other solutions. One of the most important things to remember is that blended finance, particularly in the development context, is still in its early days. Until the Addis Ababa Action Agenda — the international conference held in 2015 that laid out the foundation for SDG financing — there were practically no communities of practice or profound contemplation on the subject of blended finance and sustainable development. Now that we have had five years to consider blended finance’s role in sustainable development, there are a few new strategies that both donors and investors can consider when pursuing blended finance solutions to deliver sustainable development to the areas that need it most. TAKING A PORTFOLIO APPROACH Theoretically, blended finance is an attractive proposition. Concessional capital from a government or philanthropic organisation can absorb the early losses tied to risky investments. This makes the risk-adjusted return on the riskier investments more palatable to investors with large amounts of capital — including institutional investors and pension funds. And while these sources of capital investment should be targeted for development-oriented investments, it does not mean that blended finance is always the best solution. One reason is the size of the transactions in developing countries and LDCs. In many instances, it is simply not big enough for traditional investors, meaning that executing an investment would simply not make business sense relative to the costs. Separately, these groups of CFI.co | Capital Finance International

investors often lack the boots on the ground in, or deep knowledge of, developing and LDC markets. So even if the cost of the transactions were not prohibitive, the perceived risk of the investment — just as often as the actual risk — can still prevent the unlocking of commercial capital. This does not mean that blended finance can never be used for investments in developing and least developed countries; and of course, we should do all we can to help investors separate the perceived risks of investing in these markets from actual risk. There is also scope for financial engineering to deliver scale and reduced risk, for example by blending within large investment funds whose money goes down either directly into small transactions or into smaller, lower cost, and more nimble local funds. But donors need to accept that blended finance is not always going to be the best solution to finance a given transaction in these geographies. And in a context where ODA is an ever finite, if not shrinking, resource, donors would be better served if they adopted a portfolio approach towards blended finance transactions. Such an approach calls on donors to assess their development projects in the context of the portfolio as a whole, not as a set of disconnected, individual investments. More to the point, it means lining up projects and strategically deploying ODA in a holistic fashion. A portfolio approach involves concentrating your ODA on the riskiest investments and preserving your blended finance deals for those projects that are a bit more palatable. Despite the downward trend of ODA, the fact that it can be deployed as purely concessional capital gives it an essential and irreplaceable purpose. Deploying more ODA towards a very risky investment, versus less ODA in the hope of unlocking private capital, can be the best way to use those precious funds. In essence, this is a Ricardian argument on comparative advantage. When parties trade in goods or services on the basis of what each party is able to produce most effectively, the resulting efficiency produces an all-in economic gain. Donors should probably not be trying to induce private sector investment in the most extreme of situations where they, and only they, have the type of capital that can enter these situations. COMMUNITIES OF PRACTICE The concept of blended finance is not new. Investment transactions of this nature have been around for at least 50 years, even if we did not call it blended finance. But today, while it is