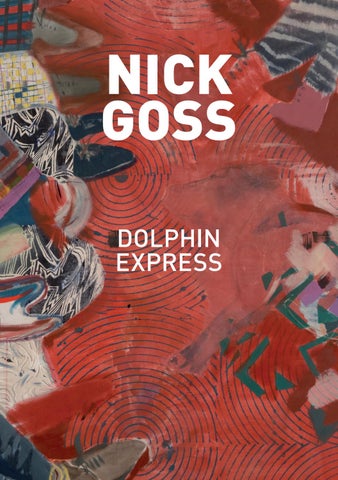 Nick Goss discusses Dolphin Express, his first exhibition at Contemporary Fine Arts with CFA’s Camila McHugh. This conversation began in Nick’s studio in Elephant and Castle and continued via email between London and Berlin. Camila McHugh: Your exhibition Dolphin Express opens in Berlin November. This is your first exhibition in Europe and first created in your new studio in Elephant and Castle. There are elements of past bodies of work here – the flooded imagery and photographs of De Ramp, the North Sea flood in Holland after which you named your last exhibition, the prints and interiors which considered north London’s Turkish communities in Green Lanes. How do you situate this series of paintings within your practice? Nick Goss: Well, when I began this body of work, I was interested in exploring this idea of the flood that informed my previous exhibition a bit further. My Dutch Oma gave me the book you mentioned, De Ramp a number of years ago, and many of the images that commemorate and document the flood, served as starting points for work in this exhibition as well. This spring I also travelled to Zeeland in Holland and stayed with my Auntie there to continue my research into that 1953 flood, which forced my relatives and many others to flee. For this new body of work, I paid attention to images of people in transition. This idea of travelling to an undisclosed, new home has drifted into the narrative. Some of these images came from film stills of people travelling and others from photos I took on my commute from South London to the studio. When I started to work with these images, drawing and collaging with them, ideas around migration started to arise, and that was something I looked to develop with the paintings. CMC: What films and reference material were you drawing upon, in addition to your observations during your commute and around the neighbourhood? NG: I recently watched Theo Angelopolus’ Trilogy: The Weeping Meadow – it is set in 1919 and depicts Greek refugees fleeing the Red Army and heading to their homeland – and drew upon some of that imagery in the work. The sleeping banjo player in Dolphin Express comes from a still from that film actually. Also, John Berger and Jean Mohr’s A Seventh Man filtered in to the ideas that surround the paintings. Berger and Mohr immersed themselves in the migrant experience in the 1970s and answer questions concerning what compels people to leave their own countries. CMC: This body of work seems to build upon a play with juxtaposition that was fainter in the past. You have likened past works to shreds of cloth, shawls that bear traces of wear and memory, while these works allow different images and points in time to coalesce and complicate each other in a different way. NG: Yeah, I am interested in what happens to these images when you put them together: when you print images from the flood onto the waiting room at my doctor’s office, or how a scene of commuters is radically altered when juxtaposed with a group of people escaping floodwaters by boat. In a flood your environment is reflected back up to you, what was once recognisably London becomes unfamiliar or uncanny. This is another form of staging an encounter and also something I wanted to bring into this new series of paintings. CMC: Many of the images in the paintings, like the waiting room or the subway car you mention, are scenes of transition or waiting. This banality and waiting is particularly

poignant when juxtaposed with the flood, also with the vibrant patterns you bring in. What drew you to those listless or bored moments? NG: These transition times were really present in the commuting and day to day scenes I saw around me in London. There is a bit in A Seventh Man where Berger describes the way the dreamer receives the events of the dream, but is not in control of them, can scarcely influence them. I think some of those empty moments can drift into dreamscapes in a similar way. Some of the works begin to hover between a nightmare and a dream. CMC: I read the book after coming across an excerpt in the catalogue for your De Ramp

exhibition. I was struck by the way the anecdotes in A Seventh Man and the images donâ&amp;#x20AC;&amp;#x2122;t really pair up, it creates this sense of a simultaneous anonymity and deeply personal recognition that I also feel in your work. It is a kind of timelessness. Like in Southern, for instance, I find myself searching for the faces of the commuters, recognizing a hint of expression in their sparse features. NG: Iâ&amp;#x20AC;&amp;#x2122;ve found that if you paint around the subject of a painting, you can have a moment of clarity, but you leave this kind of gap or sinkhole in the work. I am interested in the way these lacunae compel the viewer to bring themselves into the work. In Commute,

for instance, I started out painting this pit bull I had seen on the Tube. I remember it was wearing a diamond collar and all the passengers were shuffling their feet away from the slobbering beast. As nearly always happens, when you start painting, the object that gave you the initial impulse to make the painting is the thing you discard. Like in Southern, the woman had this fantastic, thick fur coat that I was excited to paint, but the painting didn’t need it in the end. I think the hook of his walking stick is the only hook that the painting needed. I like that break in language: to have something that is quite hard-lined and described, juxtaposed with something ephemeral. A moment of clarity, and then things float away. CMC: I’m curious how that takes place on a technical level. To start with something very defined and let it unravel or erase. NG: Well as I only lightly prime the linen, elements of the painting bleed through the fabric onto the reverse side. You end up with a mirrored impression, like a photographic negative. Occasionally I will then flip the linen around and start to work on the other side, screenprinting patterns into the negative space around the recognisable elements of the painting. CMC: I also wanted to speak a bit more about these patterns. NG: The patterns are screenprints from fabrics I’ve found at the local shopping mall. This studio I’ve moved to in Elephant and Castle is in an area with a 4 Sinto and Biggie 2018 significant South American population. There’s also a South American convergence around the shopping mall nearby. My new surroundings have definitely drifted into the works. Bringing in these patterns was a way of dragging the streets into the works. The blue pattern in Southern actually comes from a fabric a painter friend of mine, Howard Dyke, found on the street and gave to me. I’ve used it so much – I love how there is a duality about the textile, it reminds me both of the Elephant and Castle shopping Mall, but also has this kind of 1980s T V program thing going on. CMC: Do you often use screenprinting in your paintings?

NG: Yes, the screenprinting feels important. It brings in this sense of fragmentation and also suggests documenting something, where painting is more personal or imaginative, somehow. When the two can work in conjunction, it becomes a way of compressing time and images, which I am really interested in. CMC: I really like that idea of compressing, as distinct from layering, for example. The prints have a strong presence in this body of work, maybe more than in previous series? NG: Yes, the screenprinted photographic element is more present in these paintings. Previously, I used screenprinted patterns that slipped between painting and printing a bit more. In Aquarium, I used a page from De Ramp as a print, and it has this delicate, almost stencilled quality that I really liked. In that work and also Dolphin Express or After Taste, the printing gives the work a more collaged feel. Rather than layering,

I wanted fragments of historical sources and observed moments to compress into the same picture plane – to have this slightly awkward relationship with each other. Kind of like the early Edward Burra collages from the 1920s, or the George Grosz collages that I had seen recently at the Tate Britain’s Aftermath show. CMC: Burra and Grosz’s urban scenes are also attentive to a psychology of place, which is something your work continues to broach in new ways. You’ve described your interest in writers like Sebald and Woolf and the way they can take the forensic details of a walk down the street to address larger themes of history and society. This means in part to draw upon the associations that places and imagery carry, but also goes beyond that to investigate the relationship between place and time, which in turn is really to consider the human experience. Perhaps more specifically, though, it is the way time can be

condensed almost physically when traces of the past hang onto places we experience in the present. Your paintings reveal, or remind the viewer, of something similar. NG: I recently read something Olivia Lang wrote on why she loves Derek Jarman’s Modern Nature Diary so much. She said, ‘To Jarman, there were times when it seemed the past ran very close, almost touchable’. This is almost like describing the past like a river running alongside you that now and again you can reach down and look into. You can travel in time in painting. Reveal time’s fluid, Bergsonian qualities. In Morley’s Mirror, I incorporated the patterns and silkscreened images from the last 5 years of my studio practice into the diamond mirror. I liked the idea of looking into the mirror of my local South London fried chicken joint and seeing something uncanny from the past refracted back.